At least 31 people, including 16 Italian nationals, infected with COVID-19 as India scrambles to contain its spread. 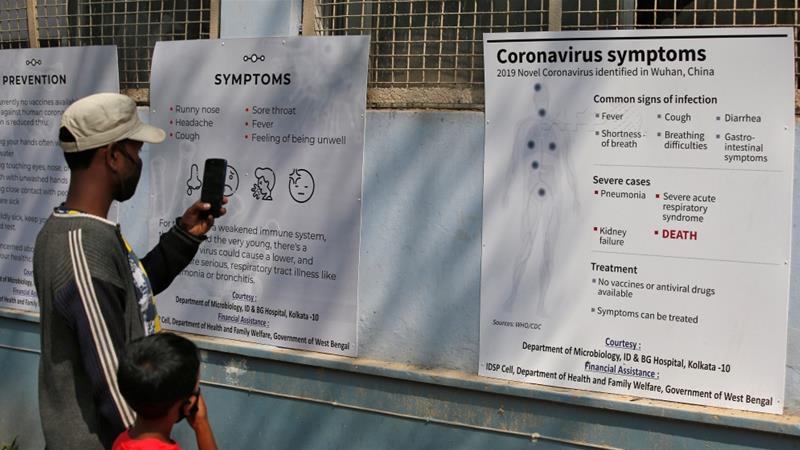 New Delhi, India – The number of coronavirus cases in India has increased sharply from six to 31 this week, as the epidemic that originated in China has infected more than 100,000 people worldwide.

Authorities in the capital, New Delhi, on Thursday ordered the immediate closure of primary schools until March 31 to prevent local transmission, while the central government made universal screening mandatory for all international passengers arriving in India.

The government also imposed travel restrictions on people from badly affected nations such as Italy, Iran and South Korea, adding to the previous screening of travellers from countries including China and Japan.

According to the World Health Organization’s (WHO) latest tally, more than 98,200 confirmed COVID-19 cases and at least 3,272 deaths have been reported globally.

More than 14,500 cases of the virus have been confirmed in 79 countries outside China, with Italy, Iran and South Korea recording nearly 270 deaths.

More than 3,000 have died in China with more than 80,400 cases since the disease known as COVID-19 was first reported last December in Hubei province, the epicentre of the outbreak.

The southern city of Bengaluru – an IT hub – New Delhi and its satellite cities, Gurgaon and Ghaziabad, reported one case each.

The patient in Ghaziabad had recently travelled to Iran, which has seen more than 100 deaths and 3,000 infections so far, becoming the worst-affected nation in the Middle East.

India’s Health Minister Harsh Vardhan told Parliament on Thursday that stranded Indian pilgrims and students in Iran were a major concern. “Government of India is following up with Iran authorities for their wellbeing and to tie up evacuation as per need,” he said.

Two private schools in Noida, a satellite city of New Delhi located in Uttar Pradesh state, were also shut down. The authorities maintained that the closure was a precautionary measure and not a government directive.

The health ministry has said that cases of local transmission have also been observed.

“It has been decided to involve district collectors and states have been asked to form rapid response teams at the district, block and village levels. Private sector shall also be engaged for COVID-19 management,” Health Minister Vardhan said in a statement.

As India braces for impact, the main concerns emerging within public health circles include weak surveillance capacity and laboratory strength in the country of a billion-plus people.

“All countries with weak health systems will face challenges in dealing with a widespread outbreak. That is why WHO has been underlining the need for preparedness – surveillance and proper use of data, training of health care workers, referral systems, laboratory capacity, health information systems and community engagement,” said Dr Soumya Swaminathan, Chief Scientist, WHO.

“In India, there is wide variability between states in health system capacity and urgent attention needs to be paid to the weaker states.”

Meanwhile, Prime Minister Narendra Modi and several other political leaders have tweeted that they would not participate in celebrations for Holi – a spring festival of colours – as “social distancing” is one of the preventive measures advised by health experts.

On Tuesday, WHO issued a warning that severe disruption to the global supply of personal protective equipment (PPE) – caused by rising demand, panic buying, hoarding and misuse – is putting lives at risk.

“Without secure supply chains, the risk to healthcare workers around the world is real. Industry and governments must act quickly to boost supply, ease export restrictions and put measures in place to stop speculation and hoarding. We can’t stop COVID-19 without protecting health workers first,” said WHO Director-General Dr Tedros Adhanom Ghebreyesus.

The WHO has supplied nearly 300,000 pieces of PPE such as caps, goggles, surgical masks, gloves and gowns to South Asian nations, and nearly 200,000 more pieces are being procured.

Meanwhile, as a precautionary measure, the Indian government on Tuesday banned the export of 26 active pharmaceuticals ingredients (APIs) or basic chemicals, including paracetamol, antibiotics and some vitamins, due to the spread of coronavirus.

It also sought to allay fears of scarcity, saying the present stock of APIs may be sufficient for two or three months to manufacture formulations.