Algeria has closed its airspace to French military flights and recalled its ambassador to France as a row between the two countries intensifies.

The moves were prompted by what Algerian officials said were “inadmissible” comments attributed to French President Emmanuel Macron, first reported on Saturday.

Analysts say a ban on French forces using Algeria’s airspace has the potential to affect an operation to hinder jihadists in the Sahel region of Africa, but the French government says it will have “no major consequences”.

Paris is currently winding down Operation Barkhane, which has seen some 5,000 French troops deployed to Mali, but Mr Macron has said he want many of those soldiers to remain in West Africa, by reshaping the counterterrorism mission in the region.

It also comes at a sensitive time for France’s relations with its former African colonies, with the 60th anniversary next March of the end of the Algerian War of Independence and Malian anger at the French pullout. The recall of the ambassador is said to have occurred after reports of comments attributed by the Le Monde newspaper to Mr Macron about what was happening in the North African country.

Mr Macron is alleged to have told a group of young people with connections to France’s former colony that Algeria’s “politico-military system” had rewritten the history of its colonisation based on “a hatred of France” and also called into question whether an Algerian nation had existed before French colonial rule.

An Algerian government spokesperson did not say exactly which comment had made it recall its ambassador, but accused Mr Macron of interfering in Algerian internal affairs. 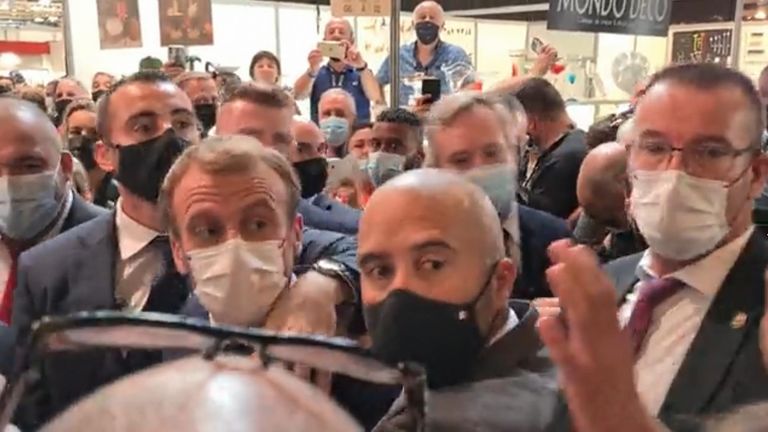 An Algerian government source, however, told Reuters the comment about Algeria’s existence as a nation had caused particular upset, and accused Mr Macron of behaving in a way that was motivated by acquiring “far-right support” ahead of next year’s French presidential elections.

French-Algerian relations were already under a degree of strain last week after France said it would slash the number of visas available to citizens of Algeria, Morocco and Tunisia – something that drew a formal protest from Algeria.

France said at the time its move was in response to North African governments’ refusal to take back illegal migrants sent home by French authorities, but Algeria summoned the French ambassador to provide an explanation. What are the wider implications?

France had hoped that its military activities in Mali, which is a southern neighbour of Algeria, would help curtail Islamist insurgent activities in the Sahara and Sahel, but violence has spread to other countries.

Consequently, France is reducing the number of its troops in Mali to 2,500-3,000, moving more assets to Niger – also a southerly neighbour of Algeria – and wants to boost the involvement of other European countries in countering the insurgency.

But, in the process, the French partial withdrawal sparked the anger of Mali, which is now working to recruit a Russian mercenary group in the place of French troops, prompting France to launch a diplomatic drive to thwart it.

It is thought that French military planes can fly around Algeria on the way to Mali and the Sahel, but being unable to use Algerian airspace could be an inconvenience for its military.

While the anti-extremist force is now boosted by a UN presence of over 13,000 troops, at a time when France is eager to quell insurgent activities, falling out with Algeria could further complicate the battle against the terror threat. Why are relations with Algeria so fragile?

France has an uneasy relationship with many of its former colonies, but the ties to Algeria are heavily shaped by the bloody seven-year independence war.

Hundreds of thousands are estimated to have died. Most were Algerians, but tens of thousands of French soldiers and former settlers were also killed.

Since independence in 1962, Algeria’s politics have been volatile, with an 11-year civil war in the 1990s also causing tens of thousands of deaths.

Stability only emerged after a political victory by former independence war freedom fighter Abdelaziz Bouteflika, but he was forced out of power by protests in 2019, after four contentious terms in office, and died in September.

The current president, Abdelmadjid Tebboune, was elected during continuing protests, during a heavily boycotted election, having previously been a member of Mr Bouteflika’s cabinets.