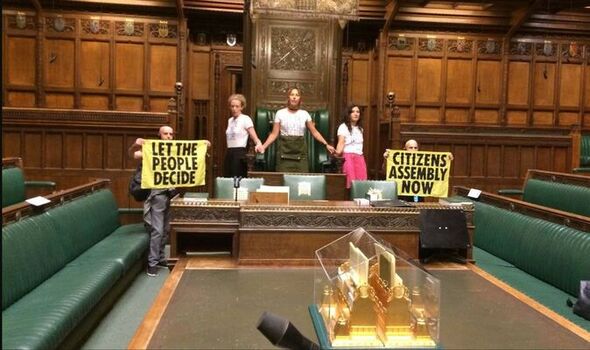 The eco-warriors formed a circle around the constitutional furniture inside Parliament this afternoon.

They posted a photo online of five people inside the chamber holding banners reading ‘Let the people decide’ and ‘Citizens’ Assembly now’.

Other members of the nuisance group hung banners from the historic building with the same wording and padlocked themselves to the gates to the Parliamentary estate.

“Extinction Rebellion have dropped banners across The Palace of Westminster, including off the building,” the group said in a statement.

“The protest points to the need for a Citizens’ Assembly to cut through the corruption in Westminster, update politics and let the people decide.”

Parliament is not currently sitting as MPs are on recess for the summer.

Members of the public and overseas tourists are allowed into the Chamber as part of tours of the building when politicians are not debating.

The latest protest in Parliament comes less than three months after the group last attempted to cause havoc in the Palace.

In June nearly a dozen members of Extinction Rebellion occupied the central lobby of the Westminster building.