Home » Politics » Why the I.R.S. Is at the Center of a Political Firestorm

Republicans have zeroed in on Democrats’ plan to strengthen the agency. We checked in with two reporters covering the politics of tax law enforcement.

This article is part of our Midterms 2022 Daily Briefing 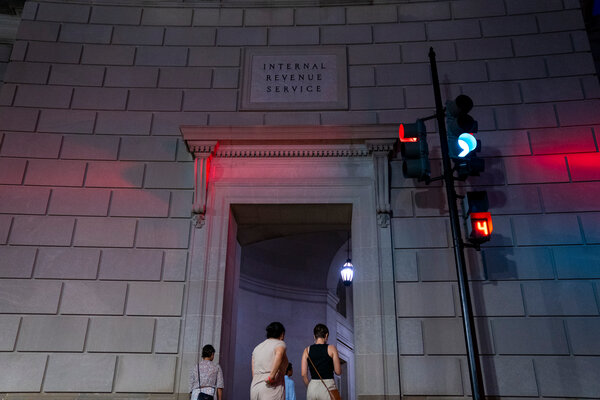 In recent days, Republican politicians and operatives have attacked the Biden administration’s $80 billion plan to beef up the Internal Revenue Service’s capacity to audit wealthy Americans.

Announcing the 10-year initiative, Treasury Secretary Janet Yellen said the additional money would address a backlog of unprocessed tax returns, improve taxpayer services, help the department overhaul its antiquated technology and allow it to hire thousands of new employees. Democrats have long accused Republicans of deliberately starving the tax agency of the resources it needs to function effectively — an accusation many in the G.O.P. are happy to accept as fact.

Ron DeSantis, the governor of Florida, said that “of all the things that have come out of Washington that have been outrageous, this has got to be pretty close to the top.” He added that Democrats were “basically” offering “a middle finger to the American public.”

In an open letter addressed as “Dear American Job Seeker,” Senator Rick Scott of Florida, the leader of the G.O.P.’s efforts to recapture the Senate, threatened to “defund” President Biden’s plan and warned Americans not to apply for the new I.R.S. positions.

To get some ground truth on what the administration is trying to accomplish — and why — I spoke with Alan Rappeport, who covers the Treasury Department in Washington, and Jim Tankersley, a White House correspondent for The Times who focuses on economic policy.

We also delved into the politics of the Republican critiques, which come as various investigations bore in on the former president’s finances and his handling of classified documents.

Our conversation, lightly edited for length and clarity:

I know both of you have been following this I.R.S. fracas closely. I’d welcome both of your initial thoughts on what is going on here.

Alan Rappeport: Thanks, Blake. This is a policy that has been a long time coming, and in some ways it is surprising that it managed to hang on as one of the few surviving pieces of President Biden’s original “Build Back Better” agenda.

For Democrats, keeping this in their Inflation Reduction Act was a victory in many ways, because for many years they have wanted to make sure that the I.R.S. had enough money to operate properly after Republicans went to great lengths to starve the agency of resources.

But the policy also comes with political challenges because, well, nobody really loves paying taxes or being audited. The I.R.S. is an easy agency to demonize, and giving it $80 billion could be a hard sell to voters.

A substantive legislation. The $370 billion climate, tax and health care package that President Biden signed on Aug. 16 could have far-reaching effects on the environment and the economy. Here are some of the key provisions:

Auto industry. Until now, taxpayers could get up to $7,500 in tax credits for purchasing an electric vehicle, but there was a cap on how many cars from each manufacturer were eligible. The new law will eliminate this cap and extend the tax credit until 2032; used cars will also qualify for a credit of up to $4,000.

Energy industry. The legislation will provide billions of dollars in rebates for Americans who buy energy efficient and electric appliances. Companies will get tax credits for building new sources of emissions-free electricity. The package also includes $60 billion set aside to encourage clean energy manufacturing and penalties for methane emissions that exceed federal limits starting in 2024.

Health care. For the first time, Medicare will be allowed to negotiate with drugmakers on the price of some prescription medicines. The law also extends subsidies available under the Affordable Care Act, which were set to expire at the end of the year, for an additional three years.

Tax code. The law introduces a new 15 percent corporate minimum tax on the profits companies report to shareholders, applying to companies that report more than $1 billion in annual income but are able to use credits, deductions and other tax treatments to lower their effective tax rates. The legislation will bolster the I.R.S. with an investment of about $80 billion.

Low-income communities. The package includes over $60 billion in support of low-income communities and communities of color that are disproportionately burdened by climate change. Among the provisions are grants for zero-emissions technology and money to mitigate the negative effects of highways and other transportation facilities.

Fossil fuels industry. The legislation requires the federal government to auction off more public space for oil drilling and expand tax credits for coal and gas-burning plants that rely on carbon capture technology. These provisions are among those that were added to gain the support of Senator Joe Manchin III, Democrat of West Virginia.

It strikes me that this I.R.S. expansion is coming at a particularly fraught time in American politics, with many on the far right whipping up anti-government sentiments after the F.B.I. searched Donald Trump’s home in Florida. Alan, are you seeing those two streams cross each other?

Alan Rappeport: That definitely seems to be the case. Both situations play into the fears that Republicans tend to feel — and to stoke — about the federal government being weaponized against them.

And the fact that the I.R.S. funding was approved around the same time that Trump’s estate was searched kind of amplified those sentiments, with social media and cable news linking them to drive home the idea that the government is conspiring against conservatives.