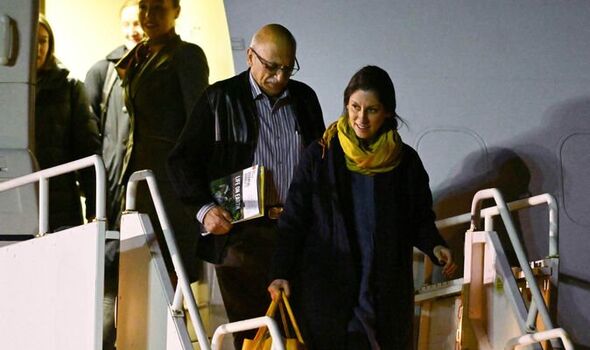 But it may also indicate a willingness to tolerate Iran’s brutal regime if it can be enticed to decrease its reliance on Russia and China. Nazanin, 43, was finally reunited with her husband Richard and seven-year-old daughter Gabriella on Thursday, along with another dual-national, businessman Anoosheh Ashoori, 65. Charity worker Nazanin was arrested in 2016 after being falsely accused of plotting to overthrow the Iranian government.

Her freedom follows a tortuous campaign by Richard and a series of “complicated” negotiations by the Foreign Office.

It was ultimately secured by payment of a £393.8million debt, owed by Britain for failing to deliver 1,135 Challenger tanks ordered by the Shah of Iran shortly before he was overthrown in 1979.

Britain has long acknowledged the debt but had previously said that it could not pay it due to strict sanctions against the regime.

The money was said to have been paid on assurances that it would be used purely for humanitarian purposes, and most likely followed tacit US approval. In a statement last week, Foreign Secretary Liz Truss maintained that the repayment was ­“parallel” to Nazanin’s release, despite clear linkages by the regime in Tehran.

But last night, an expert suggested the real reason behind the timing of the payment was efforts by Britain, on behalf of European nations, to secure an alternative supply of crude oil following Russia’s ­invasion of Ukraine.

News of Nazanin’s release – which even on Thursday was not guaranteed, said sources – followed a meeting in Riyadh between Prime Minister Boris Johnson and Mohammed bin Salman, the Saudi Arabian crown prince, aimed at persuading the OPEC giant to release more crude.

“Despite certain officials and experts claiming the debt repayment was isolated, I cannot see how it is separate from considerable concern that now exists about global energy markets,” said Eloise Scott, global intelligence manager for Sibylline strategic risk group.

“There is a significant focus on keeping oil flowing which isn’t from Russia.

“But while it’s not impossible that the UK went to Tehran because of a failed Saudi mission, there may be other strategic considerations at play.”

At stake are three overall concerns: regional instability following the US ­withdrawal from the region, the need to secure alternative sources of oil, and ­signals from Iran that it is willing to come to terms over its nuclear ambitions.

“Both Riyadh and Tehran have young ­populations, high unemployment and both are anxious about regime survival,” said Ms Scott.

“Mohammed bin Salman sees a huge opportunity to use high oil prices to make up for the economic fallout caused by Covid and drive through his liberalisation reforms.

“But it’s a different story for Iran. While the regime is now united around hardline conservatives who are incredibly anti-West, its biggest threat isn’t the West but its own population.

“It is beset by major protests and ­separatist movements which, it fears, may yet unite.”

Recently, it started to convert a third of its highly enriched uranium into ­material for medical purposes, in what has been viewed as a “significant show of faith”.

And, though Iran turned to China last year for relief against sanctions, it did so reluctantly, Ms Scott said. “This may well have been another consideration by Britain, which spied an opportunity to pull Iran from China’s and Russia’s grasp.

“The only reason Iran shifted towards China is desperation, and that relationship is still in its infancy.

“If European and Western markets became more accessible, it may prove a much more preferable option to China’s record of saddling nations with debt,” she added.