PHOENIX — Cindy Bishop is the sort of voter who has some Republicans bracing for a wipeout next month.

Standing inside her garage, shielded from the 102-degree desert heat, Ms. Bishop, a 61-year-old medical professional, said she voted for Mr. Trump four years ago because “he wasn’t a politician.” But then, she said, “I got a taste of him and I’m like, ‘God, he’s disrespectful’ — there’s so much about him I don’t like.” She is now leaning toward Joseph R. Biden Jr.

The inflammatory behavior that has alienated voters beyond his base has long posed the most significant impediment to Mr. Trump’s re-election. But one week after he rampaged through the first presidential debate and then was hospitalized with the coronavirus, only to keep minimizing the disease as it spread through his White House, the president’s conduct is not only undermining his own campaign but threatening his entire party.

New polls show Mr. Trump’s support is collapsing nationally, as he alienates women, seniors and suburbanites. He is trailing not just in must-win battlegrounds but according to private G.O.P. surveys, he is repelling independents to the point where Mr. Biden has drawn closer in solidly red states, including Montana, Kansas and Missouri, people briefed on the data said.

Nowhere has Mr. Trump harmed himself and his party more than across the Sun Belt, where the electoral coalition that secured a generation of Republican dominance is in danger of coming apart.

“There are limits to what people can take with the irresponsibility, the untruthfulness, just the whole persona,” said Jeff Flake, the former Republican senator from Arizona. Mr. Flake is crossing party lines to support Mr. Biden, who made his first visit of the general election here Thursday.

Many of the Sun Belt states seemingly within Mr. Biden’s reach resisted the most stringent public-health policies to battle the coronavirus. As a result, states like Arizona, Georgia and Texas faced a powerful wave of infections for much of the summer, setting back efforts to revive commercial activity.

In Arizona, a low-tax, regulation-resistant state, the focus on reviving business helped drive the unemployment rate down to 5.9 percent in August, with some of that apparent improvement coming from people leaving the labor force in a state with a large hospitality sector that has suffered in the pandemic.

Still, Arizona continues to face a long climb to return to its pre-pandemic economy. Twice as many Arizona residents filed new claims for unemployment benefits at the end of September than they did at the previous time last year, the Labor Department reports.

Mr. Biden is mounting an assertive campaign and facing rising pressure to do more in the historically Republican region. He is buttressed by a fund-raising gusher for Democratic candidates, overwhelming support from people of color and defections from the G.O.P. among college-educated whites in and around cities like Atlanta, Houston and Phoenix. 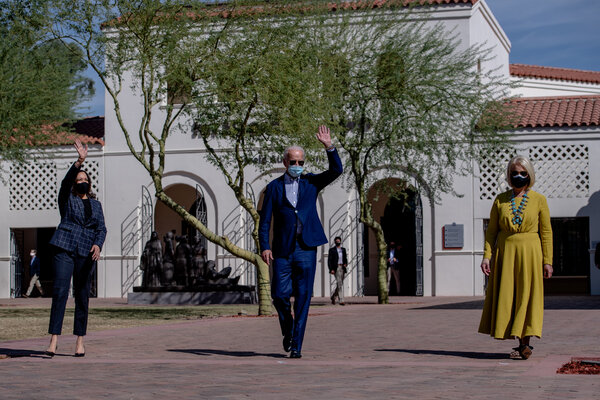 “Cities in states like Arizona and Texas are attracting young people, highly-educated people, and people of color — all groups that the national Republican Party has walked away from the last four years,” said the Oklahoma City mayor, David F. Holt, a Republican. “This losing demographic bet against big cities and their residents is putting Sun Belt states in play.”

Gov. Doug Ducey of Arizona, a Republican who like Mr. Holt has won in increasingly forbidding environments, said his party needed to recognize an enduring verity about politics: “It’s a game of addition.”

Some of the states that appear effectively tied today, such as North Carolina and Georgia, could still prove difficult for Mr. Biden to carry. Few Democratic nominees have proven able to forge coalitions to tip these states and the president’s appeal among working-class whites in the South will at least keep him competitive.

Even in South Carolina, Republicans have grown deeply concerned about Senator Lindsey Graham’s re-election campaign, and Senator Mitch McConnell, the majority leader, has had several sobering conversations with Mr. Graham, according to Republicans familiar with the discussions.

The Senate Republican campaign arm has also intervened in Mr. Graham’s imperiled campaign, with a handful of senior aides at the committee taking a more hands-on role.

On Thursday, in a conference call with a group of lobbyists, Mr. McConnell vented that the party’s Senate candidates are being financially overwhelmed because of small-dollar contributions to ActBlue, the online liberal fund-raising hub.

In some ways, the shifts in the Sun Belt have accelerated since Mr. Trump’s nomination four years ago.

Even as he stunned Hillary Clinton in three crucial Great Lakes states, he lost Colorado, Nevada and New Mexico and fared worse in Arizona, Texas and Georgia than Mitt Romney had four years earlier.

Two years later, Democrats performed even better in a series of high-profile races across the region with college-educated white voters and people of color.

Now Republicans are at risk of that wave cresting again, and even higher.

“Racism and misogyny and demagoguery and being just hateful and cruel and intolerant are not things in the Southwest that play very well,” said Gov. Michelle Lujan Grisham of New Mexico, a Democrat. She said Republicans had left a wide space for her party in her region by clinging to “messaging that’s 40 years old” on issues like immigration and climate.

If Mr. Biden wins by simply flipping back the Democratic-leaning Great Lakes states, Mr. Trump and his allies can pin the blame on the virus. But if Mr. Trump loses across the South and West, it would force a much deeper introspection on the right about Trump and Trumpism — and their electoral future in the fastest-growing and most diverse part of the country.

“The Southern strategy has been flipped on its head,” said Representative Darren Soto of Florida, a Democrat, alluding to the Nixon-era tactic of expanding the Republican coalition by winning in once-Democratic strongholds of the South.

This is part of the case that former Representative Beto O’Rourke of Texas is making to Mr. Biden’s campaign.

Polls show the presidential race in Texas is effectively tied, and congressional polling for both parties has found Mr. Biden running up significant leads across the state’s once-red suburbs. A Biden victory there could be transformational, providing Democrats an opportunity to enlarge their House majority, shape redistricting and deliver a devastating psychological blow to Republicans.

“Texas is really Biden’s to lose if he invests now, and that must include his time and presence in the state,” Mr. O’Rourke said in an interview. “He can not only win our 38 electoral votes but really help down ballot Democrats, lock in our maps for 10 years, deny Trump the chance to declare victory illegally and send Trumpism on the run.”

Mr. O’Rourke said Mr. Biden heard him out and promised “full consideration.” For now, Mr. Biden is increasing his ad spending in the state and is expected to dispatch his wife, Jill, and his running mate, Senator Kamala Harris, there in the coming days, according to Democrats familiar with the planning.

Texas’s growth has been explosive: Over 1.5 million new voters have registered since 2016, a third of them in the diverse, transplant-filled counties that include San Antonio, Houston and Austin. The anger toward Mr. Trump has emboldened Democratic candidates to run more audacious campaigns.

In a Dallas-area House district held by a Republican who’s retiring, the Democratic Party is sending mailers telling voters that their nominee will “stand up to President Trump.” Senator John Cornyn, running for re-election, has lamented privately that Mr. Trump is stuck in the low 40s in polling, holding back other Republicans, people familiar with his comments said.

Mr. Trump is at even greater risk in the next-largest red state in the South: Georgia. In the latest Republican polling, Mr. Trump has fallen several points behind Mr. Biden in the state, where 16 Electoral College votes, two Senate seats and several competitive House races are on the ballot.

“It feels like after the debate there was a real shift,” said State Senator Jennifer Jordan, a Democrat from suburban Atlanta.

Ms. Jordan’s district is exactly the kind of area that has swung away from Republicans in the Trump era. She said she believed Mr. Trump still had more ground to lose with the professional class and that his bout with the coronavirus was not helping.

“The fact that he has it is kind of a living example of how he has mismanaged and misjudged this virus,” she said, adding, “The Chamber of Commerce Republicans, business Republicans, who may have been on the fence, I think they’re breaking now for Biden.”

Brian Robinson, a Republican strategist, said his party was confronting a “demographic bubble” that had accelerated with the flight of white women.

“The G.O.P. has to stop that bleeding,” Mr. Robinson said.

In the House, the Sun Belt appears to represent the area of greatest peril for the G.O.P., as Democrats make inroads not only in the suburbs but in outer-rung communities that are typically whiter, older and more conservative.

That was evident, quite literally, from the Glendale, Ariz., home of Hiral Tipirneni, an emergency room doctor who is challenging a Republican incumbent in an exurban district that Mr. Trump carried by 10 points.

Sitting in her outdoor courtyard with a view of the stucco sprawl enveloping greater Phoenix, Ms. Tipirneni made the case for why the daughter of Indian immigrants could win a seat long held by white Republican men.

“Our county is a good microcosm of our state and I think the state is becoming a good reflection of our whole country,” she said of Maricopa County, which is now the fourth-largest county by population in the country.

After winning it by about three points in 2016, roughly the same as his statewide margin, Mr. Trump is now trailing in Maricopa by nine points, according to a New York Times/Siena College poll.

If the election here unfolds like many Arizona Republicans are dreading it might, they will in two years have lost the presidential race, both Senate seats, both chambers of the state legislature and watched as voters approved a ballot measure levying a surtax on the wealthy for increased education funding.

The Trump and Biden campaigns spent Thursday sparring over the debate schedule as President Trump objected to a plan for a virtual debate. Read the latest updates.

Many rules have changed during the pandemic, making it harder to figure out how to cast your ballot. This interactive guide can help you ensure your vote is counted.

Keep Up With Our Coverage

Get an email recapping the day’s news