WASHINGTON — President Trump continued to downplay the seriousness of his own coronavirus infection on Tuesday, seeking to project an image of vigor and normalcy even as the virus extended its rampage through official Washington, infecting another top White House aide, Stephen Miller, and reaching the highest levels of the Pentagon.

“FEELING GREAT,” Mr. Trump wrote in a morning Twitter post, before declaring that he was “looking forward” to his scheduled second debate on Oct. 15 with his Democratic opponent, former Vice President Joseph R. Biden Jr.

Mr. Trump’s physician, Dr. Sean P. Conley, also released a memo stating that the president “reports no symptoms” and “continues to do extremely well,” although Dr. Conley, whose credibility has come under scrutiny after he admitted to giving a rosy assessment of the president’s condition over the weekend, did not make himself available to answer reporters’ questions.

Health experts said the suggestion that Mr. Trump was making a swift and full recovery, amplified in conservative news media outlets, was highly premature given that Covid-19 can suddenly worsen even after a patient appears to improve several days after the onset of symptoms, which Mr. Trump began to display by Thursday. Whether Mr. Trump can attend a debate with Mr. Biden in just over a week will depend in part on whether he can avoid such a relapse. Mr. Biden said on Tuesday that the men “shouldn’t have a debate” if the president remains infected.

Repeating the message he delivered upon his return to the White House on Monday after three days in Walter Reed National Military Medical Center, Mr. Trump again minimized the toll of the pandemic, urging Americans to be less fearful of it and making a social media post that misleadingly compared it to the far less lethal seasonal flu, whose typical death toll he exaggerated.

Mr. Trump’s efforts to minimize the virus and present a business-as-usual image were undermined, however, by word that a contagion that has now infected at least nine White House aides had reached Mr. Miller, one of his most senior advisers, who tested positive on Tuesday, a senior administration official said.

Because of the virus, Gen. Mark A. Milley, the chairman of the Joint Chiefs of Staff, and nearly all the rest of the Joint Chiefs took to their homes or alternate locations to self-quarantine, after Adm. Charles Ray, the vice commandant of the Coast Guard, tested positive.

“None of the Pentagon officials have shown symptoms or tested positive,” Jonathan Hoffman, a Pentagon spokesman, said in a statement. He said the quarantines reflected “an abundance of caution.”

The move, reported earlier by CNN, nevertheless represented an alarming development, as the virus extended its reach from the highest levels of civilian government to the operational heart of the country’s national security apparatus.

Military officials insisted that all of the service chiefs had full operational capability from where they were working, and said their quarantine would not mean any degradation to the country’s national defense.

“There is no change to the operational readiness or mission capability of the U.S. armed forces,” Mr. Hoffman said. “Senior military leaders are able to remain fully mission capable and perform their duties from an alternative work location.”

Admiral Ray was in the Pentagon last week, attending meetings in the secure “Tank” with General Milley and the senior Pentagon uniformed leadership. Defense Department officials said the decision to quarantine complied with guidelines established by the Centers for Disease Control and Prevention.

General Milley and a number of senior Defense Department officials have also been getting tested frequently since Sept. 27, when much of the Pentagon’s senior leadership attended a White House reception for families of fallen troops. Both Mr. Trump and Melania Trump, the first lady, who has also tested positive, were at that event. 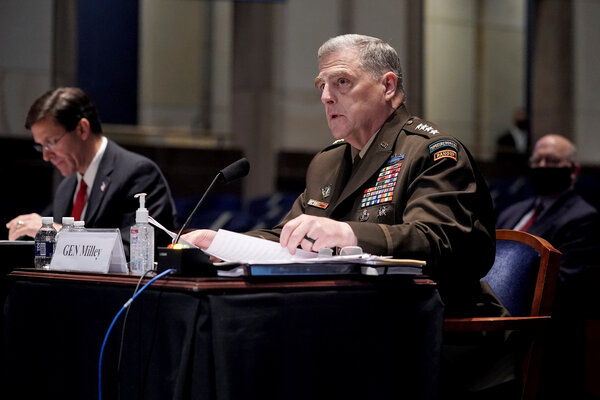 “Instead of leading, President Trump continues to willfully jeopardize the safety and security of the American people and our military apparatus,” Representative Adam Smith of Washington, the Democratic chairman of the House Armed Services Committee, said in a statement.

General Milley’s quarantine also raised questions about the status of Secretary of State Mike Pompeo, who joined the general at the White House on Sunday afternoon to deliver a national security briefing via secure video to the president, who was then at Walter Reed. Mr. Pompeo flew soon afterward to Japan for diplomatic meetings.

Dr. William Walters, the deputy chief medical officer for operations at the State Department, said that “to deliver on his promise for world-class diplomatic engagement during these unprecedented times,” Mr. Pompeo “undergoes repeated testing and is evaluated almost daily by a department physician as he prepares for, conducts or returns from engagements overseas.”

“We are following the current situation at the White House and Pentagon closely, and are applying the best science and the current public health recommendations,” Dr. Walters added.

At the White House, Mr. Miller, a domestic policy adviser and speechwriter known for his severe views on immigration, joins Hope Hicks, a counselor to the president, and Kayleigh McEnany, the White House press secretary, as the third senior member of Mr. Trump’s staff to contract the virus in recent days.

An administration official also confirmed that two more aides to Ms. McEnany, who announced her own positive test on Monday, had tested positive, making for a total of five staff members in the press office who have contracted the virus.

Vice President Mike Pence’s physician released an update on his condition on Tuesday, saying that Mr. Pence had “remained healthy, without any Covid-19 symptoms.” The physician, Dr. Jesse T. Schonau, said Mr. Pence had been tested daily with negative results and reiterated his past assertion that, under C.D.C. guidelines, Mr. Pence did not qualify as a “close contact” with anyone who had tested positive for the virus.

“The vice president is encouraged to go about his normal activities and does not need to quarantine,” Dr. Schonau wrote. Mr. Pence is in Salt Lake City before Wednesday night’s vice-presidential debate with Senator Kamala Harris of California and plans to attend campaign rallies in Arizona and Nevada the next day.

But leaving no room between the vice president and the president on the threat from the virus, Mr. Pence’s aides said the plan announced on Monday by the Commission on Presidential Debates for him and Ms. Harris to debate while sitting more than a dozen feet apart and behind plexiglass dividers to prevent any viral transmission was unnecessary.

“We don’t think it’s needed,” said Marc Short, Mr. Pence’s chief of staff. “There’s no science to support it. The tables are 12 feet apart and each participant is tested. It’s important for the American people that the debate go forward, and if she’s more comfortable with plexiglass, than that’s fine.”

In his tweet on the flu, Mr. Trump said, “Many people every year, sometimes over 100,000, and despite the Vaccine, die from the Flu,” and he added that it did not result in shutting the country down. “No, we have learned to live with it, just like we are learning to live with Covid, in most populations far less lethal!!!” Mr. Trump wrote.

Mr. Trump’s figure for flu deaths was highly misleading. According to C.D.C. figures, in a typical year over the past decade, fewer than 50,000 Americans died from influenza. Deaths peaked at an estimated 61,000 in the 2017-18 season — or less than one-third the toll from the coronavirus in an America where widespread precautions have been in effect for months. Without them, many experts say, the coronavirus death toll could have reached into the millions.

Mr. Trump also upended the stimulus talks in Congress with a series of tweets in which he accused Speaker Nancy Pelosi of “not negotiating in good faith” and urged Senate Republicans to focus solely on confirming his nominee to the Supreme Court, Judge Amy Coney Barrett.

Mr. Trump said he had instructed his aides to stop negotiating on the stimulus, sending the S&P 500 down 1.4 percent for the day.

“Our Economy is doing very well,” Mr. Trump tweeted as the market fell. “The Stock Market is at record levels, JOBS and unemployment also coming back in record numbers. We are leading the World in Economic Recovery, and THE BEST IS YET TO COME!”