Boris Johnson is facing a growing rebellion over a refusal to extend free school meals to all holidays – as protesters left dozens of empty plates outside the office of one MP.

A number of senior Tories have gone public however, with one suggesting Number 10 has “misunderstood” the mood of the nation.

Manchester United star Marcus Rashford has been highly praised for leading the campaign and his petition has quickly gathered nearly 900,000 signatures.

Councils including Birmingham and Liverpool are among those who have responded by providing tens of thousands of children with food parcels and vouchers this half term.

Some small businesses and organisations around the country have also stepped up to help.

The government extended the meals scheme during the summer holidays, but now insists its measures are enough to support families who may be struggling during the pandemic.

Dozens of empty plates with messages on were left outside the office of Sir David Amess on Sunday – one of 322 MPs who helped defeat last week’s vote on extending the scheme until Easter. 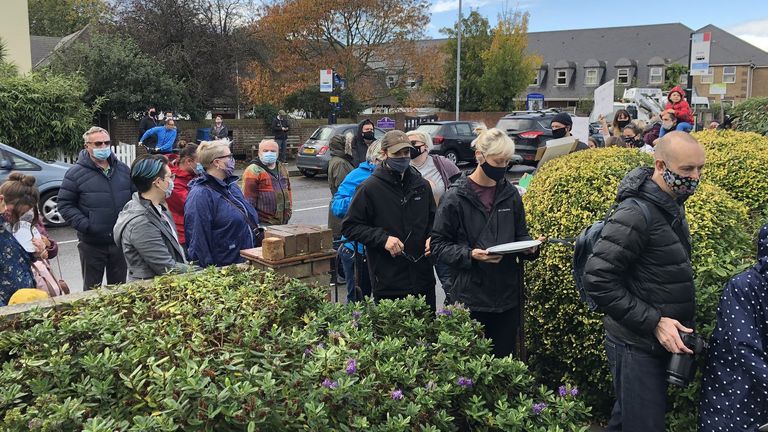 “Quite a few of us are mothers in the group, the moment you start thinking too much about them ever being hungry, it’s just heartbreaking,” said organiser Sadie Hasler, 40, from Southend

Some Tories though are increasingly uneasy at the government’s refusal to budge, especially with the cost of extending the scheme to the current school break estimated at a modest £20m.

Sir Bernard Jenkin, chairman of the Commons Liaison Committee of senior MPs, told Sky’s Sophy Ridge: “We have to admit we’ve misunderstood the mood of the country here…

Tim Loughton, another former minister, said it had been a mistake not to extend the meals scheme past the summer holidays and that he was prepared to vote the other way if Labour forces another vote.

“Free school meals is just one of those totemic things – it is like the NHS, it can do no wrong,” he told BBC Radio 4.

“For all the hassle this has caused, taking away from the really good measures the government has taken across the board, I just don’t think it was worth the argument. I think it was just politically a mistake.”

The children’s commissioner for England, Anne Longfield, has even likened the situation to a Dickens novel. “To have a debate about whether we should make sure that hungry and vulnerable children have enough to eat is something that is strikingly similar to something we’d expect to see in chapters of Oliver Twist – a novel published in the 19th century,” she told Sky’s Sophy Ridge.

Brandon Lewis, the Northern Ireland Secretary, defended the government’s position over the weekend.

“I think we’ve got the package in place that means people have got the support they need during school holidays,” he told the BBC’s Andrew Marr Show.

He said families were being helped to put food on the table by the increasing of Universal Credit and councils getting £63m to help people in need.

“What we are looking to do is ensure that we deal with child poverty at the core, putting the structure in place that means even in school holidays children can get access to the food that they need.”

As well as extending the scheme to all holidays, Rashford – who benefited from free meals himself, wants it to cover to all under-16s in a family that gets Universal Credit.

The 22-year-old has also just been given a Pride of Britain award for his campaigning, weeks after being made an MBE in the Queen’s Birthday Honours.