Tory leadership battle: Who is still in the running?

Former chancellor Mr Sunak topped the poll in the third round of knockout voting by Tory MPs on Monday night in the hunt for a successor to Boris Johnson. His 115 votes, up from 101 in the previous round, almost certainly guarantees that his name will go on the final ballot paper, when the vote goes to the Tory grassroots membership.

Ms Truss won 71 votes on Monday’s ballot of MPs, up from 64. Ms Mordaunt lost one supporter to clinch 82 votes. Her campaign appeared to stall after days of attacks on her ministerial record from rival camps.

Senior backbencher Tom Tugendhat was eliminated from the contest after coming bottom on Monday’s poll with 31 votes.

And yet more uncertainty was thrown into the race by another unexpected surge by outsider Kemi Badenoch. The former equalities minister gained an extra nine backers on Mondays’s vote to take her total to 58.

She tweeted: “On to the next vote. Thank you to all my colleagues for their support. It’s all to play for.

“Continued momentum, closing the gap. I am the only change candidate left in the race. I’m in it to win.”

A spokesman for her campaign said: “Kemi is pleased to have taken it to the next vote. She has momentum over both Mordaunt and Truss. It’s all to play for and Kemi is in it to win.

“She wants to deliver change and is the only candidate in the race capable of delivering it.”

Mr Sunak will promise a major crackdown on crime in a fresh policy announcement ahead of today’s fourth-round ballot. 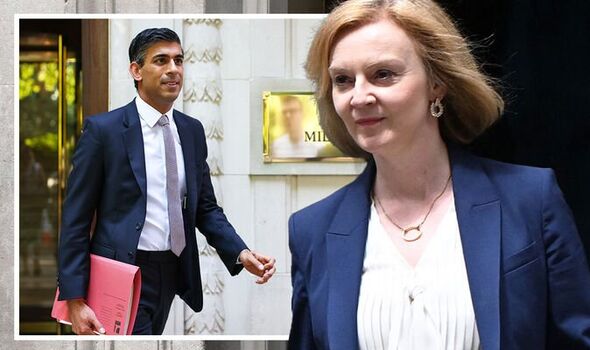 He will pledge to toughen sentencing powers for courts and launch a crackdown on grooming gangs.

After Monday’s vote, he said: “I want to thank all the colleagues who supported me tonight.

“Together we can rebuild our economy, keep Brexit safe and defeat Labour.”

A spokeswoman for Mr Sunak said: “Rishi has done well today because he is the candidate with the clearest plan to restore trust, rebuild the economy, reunite the country and because he is best placed to beat Labour at the next election.

“Every poll shows only Rishi can beat Keir Starmer, and is the candidate the public think would make the best PM.

“MPs are also recognising that Rishi has the best experience and plans to deal with the current economic situation. Rishi will rebuild our economy by gripping inflation and getting our economy growing quickly again.”

Former Home Office and justice minister Victoria Atkins, who is backing Mr Sunak in the leadership race, said: “I’ve spent the last five years working across the Home Office and Ministry of Justice and I’ve seen first hand the devastating impact crime has on our communities.

“Driving down crime and strengthening the rights of victims must be the priority of the next Prime Minister, which is why I’m backing Rishi Sunak and his new package of measures to create a safer Britain.”

Ms Truss appears to have picked up supporters from Attorney General Suella Braverman, who was eliminated from the contest in the second round.

A spokeswoman for Ms Truss said: “Liz is the candidate to lead a bold new economic approach, cut taxes, deliver on the benefits of Brexit, unite the party and win a General Election.

“Tom Tugendhat ran a campaign that he can be very proud of and he has shown the depth of quality in the Conservative Party.

“Now is the time to get behind the best candidate to deliver the economic change we need.”

Former Tory leader Sir Iain Duncan Smith, a supporter of Ms Truss, said: “This is all about momentum. Liz Truss has gone forward, Penny has stalled and gone backwards, Kemi has gone forwards as well.”

Ms Truss is now expected to focus on her alternative plan for tackling the cost of living in her battle to clinch a place in the final run-off.

A source close to the Foreign Secretary said: “Our message is pretty simple – the next election is going to be about cost of living, and Liz is the only candidate to rival Rishi with heft and experience on the economy.

“She’s certainly the only candidate capable of delivering a genuinely Conservative economic agenda from day one in Downing Street and making good on the opportunities of Brexit.”

Ms Mordaunt insisted she was still in the race and was running a “truly clean campaign” amid the smears and attacks from rival teams.

She said: “My vote is steady and I’m grateful to my colleagues for all their support and thrilled to be in second place once more.

“MPs know that I’m a strong candidate, running a truly clean campaign and putting forward a positive vision for the party and our country.”

Reaching out to Mr Tugendhat’s supporters, she added: “Tom Tugendhat is a friend and colleague who I’ve admired for years. I know that we are both committed to a clean start for our party and I believe he is one of the strongest assets in the Conservative green benches.”

Mr Tugendhat continued his call for a “fresh start” in the Government as he bowed out of the contest last night.

He said: “People are ready for a clean start and our party must deliver on it and put trust back into politics.

“I wish the remaining candidates well and look forward to continuing to serve the British people and fully supporting the next leader of the Conservative Party and Prime Minister of the United Kingdom.”

They spoke out after withdrawing from a live TV debate scheduled for tonight, following ill-tempered clashes in two earlier showdowns. The Sky News face-off of the candidates still in the race after today’s fourth knockout round was scrapped after their withdrawal.

It is understood Mr Sunak and Ms Truss decided to pull out after Tory MPs’ concern over damage done to the party by rows on TV. Mr Sunak told the Daily Express: “Conservatives are always stronger together and we must conduct this leadership contest with decency and honesty.”

He added: “When it’s over, we must unite behind the new leader and focus on delivery, rather than division. As Prime Minister, my priority will be on uniting the party behind a positive agenda that delivers for everyone across our United Kingdom.”

Ms Truss said: “The Conservative Party is at its best when we work together. As Prime Minister, I would lead a Government of all the Tory talents. The quality of the remaining candidates reflects the huge strength in depth we have.

“I am putting forward a positive vision for the country. Division only plays into the hands of all those like Sir Keir Starmer, who would betray the promise of Brexit and threaten our precious Union. For the sake of our great country, we must unite and work together to deliver for the British people.”

Tom Tugendhat, who was eliminated from the race after coming bottom in yesterday’s third-round ballot of Tory MPs, yesterday hit out at “infighting, sniping and smears” in the contest.

Ahead of last night’s result the Commons Foreign Affairs Committee chairman said: “When this is over we must come together we must unite and we must speak as one. I have deplored the infighting, the sniping, the blue on blue, the attacks and the smears.

“We do not need this, now or ever, because we are fighting on every flank.”

The heated hour-long ITV debate laid bare their divisions over the future of the economy.

Mr Sunak also clashed with rival Penny Mordaunt over the trade minister’s plan to scrap his rule of only borrowing to invest.

Sky axed tonight’s event after sources in Mr Sunak’s camp suggested he will only do further TV confrontations if he is one of the final two candidates.

Ms Truss’s team argued they are focused on closed-doors hustings to win the support of Tory MPs.

Sky News said tonight’s debate had been cancelled: “Two of the three candidates currently leading in the MPs’ ballots – Rishi Sunak and Liz Truss – have confirmed to Sky News that they do not want to take part. Conservative MPs are said to be concerned about the damage the debates are doing to the image of the Conservative Party, exposing disagreements and splits. Both are very welcome to take part in future Sky News televised debates.”

In the weekend ITV debate, Mr Sunak accused Ms Truss of peddling “something-for-nothing” economics, after she said he was choking off growth by raising taxes to their highest level in 70 years.

He added that even Labour’s ex-leader Jeremy Corbyn did not advocate the loosening of fiscal rules proposed by Ms Mordaunt.

One source on Mr Sunak’s team said: “We are very happy to do more debates if we are lucky enough to get to the next stage, including Sky News.” They argued it was not a change in thinking as the campaign had not confirmed with Sky that he would take part.

Ms Truss’s backers said she will participate in any TV debate that all the other candidates sign up to.

The rivals took part in a private hustings for the 1922 Committee of backbenchers before Tory MPs voted for their favoured candidate.

A source on Ms Mordaunt’s campaign said: “Media scrutiny is important in this contest. Penny has done broadcast and allowed time for journalists to ask questions at her launch.”

They added: “MPs aren’t just picking a new leader, but picking the nation’s new PM. Penny hopes there will be ample opportunity for such scrutiny later in the contest in a format that allows detailed questions and insights.”