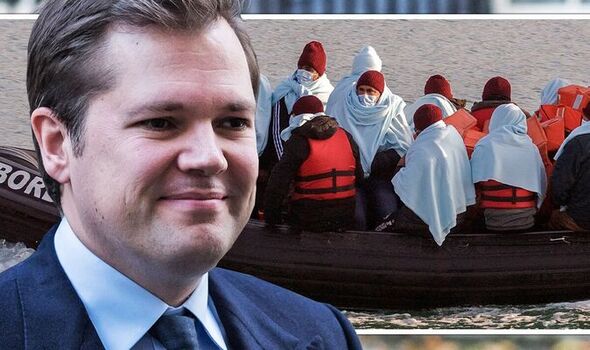 But a senior former minister hit back and accused Mr Jenrick of helping to create the current crisis. They said: “There is a lot of unhappiness in the Conservative party as to how such a difficult area that was well-managed – difficult decisions were made by predecessors – has now just got out of control. It has spiralled out of control.

“And it’s the only subject Tory backbench MPs are talking about in Westminster, about how hopeless the incumbents are in the Home Office and the problems that this is all creating in everybody’s constituencies. You go to the tearoom, you go and talk to anybody here, that’s all they are complaining about.”

Angry MPs have accused the Home Office of commandeering hotels to house asylum seekers without consulting them or local councils.

But the former minister insisted that “sensible criteria” for choosing accommodation had been in place until the rules were scrapped.

Mr Jenrick has told MPs that the Home Office struggled to cope with the arrival of tens of thousands of asylum seekers in small boats.

He said: “That has led to the Home Office and our providers failing to properly engage with local authorities and Members of Parliament. I have been clear that that is completely unacceptable and that it must change.”

Revealing that asylum seekers have been living in luxury, he said: “I could not have been clearer to my officials or the outsource partners that I do not want to see the four-star hotels, the stately homes, the luxury barn conversions and the many outrageous examples brought to my attention in the last few weeks persist.”

A Home Office spokesperson said: “The number of people arriving in the UK who seek asylum and require accommodation has reached record levels, placing unprecedented pressures on the asylum system.

“The Home Office and partners identify sites for accommodation based on whether they are safe, available and value for money. We continue to pursue larger accommodation sites in order to put an end to the use of hotels, which are not good value for the tax payer.”

The need for accommodation has grown since the Home Office moved asylum seekers out of a centre in Manston, Kent, which had been home to about 4,000 arrivals.

A total of 43,476 people who arrived in the UK in small boats since 2018 are currently waiting to have asylum claims processed, Home Office figures show. There were 33,029 new arrivals between January and September 2022.

THERE are currently more than 37,000 asylum seekers in hotels across the UK at a cost to taxpayers of £5.6 million a day and MPs have warned that the huge influx has angered residents and damaged local economies.

The Government has said it will require every local authority in the country to house asylum seekers, meaning that they will no longer be concentrated in a small number of places.