The Chancellor told MPs in the House of Commons this morning that the Northern Ireland Protocol meant that ministers in Westminster were unable to provide the same help to those in the province as the rest of the UK. Earlier this year Mr Sunak slashed VAT on materials used to help with insulation of houses, in a bid to help ease energy bills.

He argued the measures would help reduce the cost for families to make sure their homes were energy efficient, lowering the cost of heating the house.

But the Northern Ireland Protocol’s current terms mean VAT rules remain set by the EU, with the Government unable to help provide the tax cut to those in Northern Ireland.

“As I said from this dispatch box at the time of the Spring Statement, we were unable to extend our VAT cut on energy-saving materials to Northern Ireland because of some of the provisions of the Protocol,” Mr Sunak said this morning in response to a question from DUP MP Sammy Wilson.

Northern Ireland effectively remains in the EU single market under the terms of the 2019 Brexit withdrawal agreement. 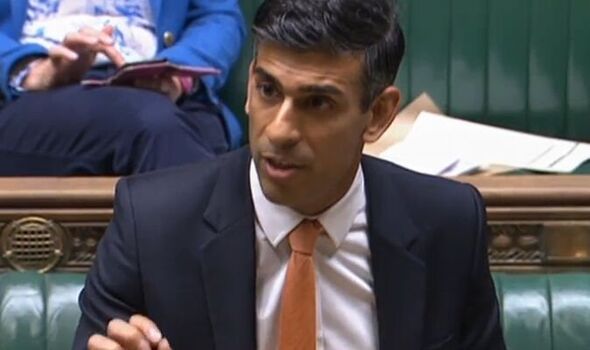 It means that the UK Government does not have permission to alter certain rules and regulations without the permission of Brussels.

The stance enraged Unionists, who argue the integrity of the single market is being undermined by the Protocol’s implementation.

Mr Wilson argued in the Commons this morning: “Many of the fiscal levers that the Government could use to support Northern Ireland are, of course, not available because of the fact we are under the VAT regime of the EU, and we are still subject to EU state aid rules which would rule out many of the measures the Government would take.”

He said: “He will know the legislation we’ve put in front of this House, and I’m glad it received support last night, will address exactly those issues.”

MPs voted by 295 to 221, a majority 74, in favour of the Government’s Northern Ireland Protocol Bill last night.

The legislation, which requires further scrutiny in the House of Commons before it can be formally passed, would give ministers the right to overrule aspects of the international agreement.

“While a negotiated outcome remains our preference – the EU must accept changes to the Protocol itself,” she added.

The UK has been locked in negotiations with Brussels since last October about changing aspects of the Protocol warning that there must be alterations in order to protect the integrity of the United Kingdom.

Ministers say they only moved to introduce legislation to give them the right to take unilateral action to remove problems caused by the Protocol after the EU refused to compromise in negotiations.

Mr Johnson said yesterday that Unionists felt let down by the Protocol and the peace process in the province risked being undermined without their support.

“What we are trying to do is fix something that I think is very important to our country, which is the balance of the Belfast/Good Friday Agreement,” he told reporters at the G7 summit in Germany.

“You have got one tradition, one community, that feels that things really aren’t working in a way that they like or understand, you’ve got unnecessary barriers to trade between Great Britain and Northern Ireland.”