Millions have voted in person or by mail, with weeks to go before Election Day.

This article will be updated regularly with new pictures.

Election Day is always the Tuesday after the first Monday in November, but the day circled on the calendar every four years is no longer the singular time when American elections happen.

That day, Nov. 3 this year, instead represents the end of a six-week sprint during which many Americans — a record number in 2020 — cast their ballots in advance.

The coronavirus pandemic has accelerated a trend toward more early voting. In an effort to make polling places less crowded on Election Day, many states have encouraged absentee voting, opened more in-person early-voting sites and, in a few cases, mailed ballots to all registered voters.

In state after state, voters have waited in line for hours — particularly on the first day in-person early voting became available. When most of Georgia opened for in-person voting on Columbus Day, voters in the Atlanta suburbs waited four, five, even seven hours to vote. The next day in Texas, turnout in a few counties was equivalent to more than 10 percent of those counties’ entire vote in the 2016 election.

While the long lines are a vivid symbol of longstanding efforts to make voting more difficult — particularly for people of color — they also demonstrate the intensity of the desire to vote in an election that millions of Americans have waited for since the last one, when President Trump won a victory that shocked the country, exhilarating his supporters and infuriating large parts of the country.

This year, millions of Americans voted as soon as they could. They sent ballots back in the mail, deposited them into drop boxes, handed them off to municipal clerks or county elections boards, or went to early-voting centers where, at least in the first few days, voters reported festive atmospheres that were free of the angst that often comes with spending hours waiting to vote on Election Day.

It has been a public demonstration of civic devotion unseen in American life for generations, but also evidence of what in many places remains a broken voting system, damaged either by neglect or intent. Yet the voters keep coming, intent on exercising a constitutional right and in hopes of shaping a better future for their country.

People waited in line to vote at the Brainerd Youth and Family Development Center in Chattanooga. 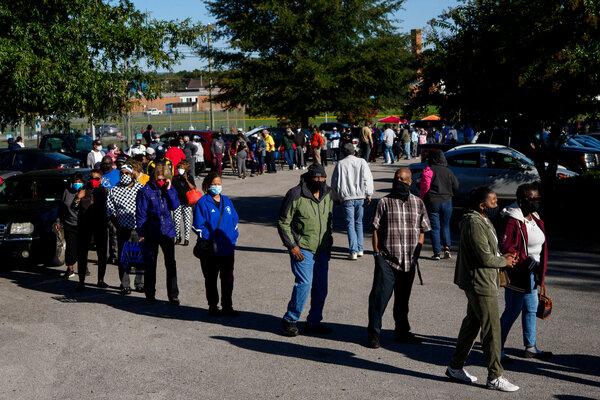 Voters lined up inside a library in Nashville.

Election workers processed sample ballots during a logic and accuracy test for ballot scanners at the Pinellas County Supervisor of Elections office in Largo.

A line formed outside a polling place before dawn on the first day of in-person early voting in Austin.

A polling place was set up and mail ballot envelopes were gathered at the Hays County Government Center in San Marcos.

A voter gave a thumbs-up to Rebecca Stark, a delivery clerk, at a drive-through ballot drop-off location at the Travis County Tax Office in Austin.

State Farm Arena, the home court for the N.B.A.’s Atlanta Hawks, was transformed into a polling place.

Social distancing markers were placed around the site, and stickers were set out for voters.

Lines stretched around a polling place at Agnes Scott College in DeKalb County.

Completed mail ballots were opened and organized at the Pinellas County Supervisor of Elections office in Largo.

People arrived for the first day of in-person early voting in Mesa.

Brent West voted at the Franklin County Board of Elections in Columbus.

A line wrapped around the building on the first day of in-person early voting. Democratic canvassers handed out sample ballots to people near the site.

Residents waited to vote at the Wicker Park Social Center in Highland.

People waited in line at the Lexington County Voter Registration and Elections Office on the second day of in-person absentee and early voting.

A group of friends dressed like suffragists gathered on the corner near a polling place at the Polk County Auditor’s Office in Des Moines.

Sample ballots were on display below portraits of former mayors at City Hall in Lewiston.

People arrived to vote in person or to return completed mail ballots in Lewiston.

A voter signed in to cast his ballot at the San Diego County Registrar of Voters Office.

Paperwork and protective gloves were set out for voters at the San Diego polling place.

Maxine Johnson cast her ballot at the Loop Super Site, an early voting hub in Chicago.

Brett Everage completed his ballot outside Philadelphia City Hall on the second day of early voting in the city.

Melissa Thompson and Kyle Thompson filled envelopes with ballots to be sent to voters in West Bloomfield Township.

A woman turned in her mail ballot at a drop box in Detroit. Ballots were sorted before being sent to voters in West Bloomfield Township.

A man returned his absentee ballot in Warren.

People waited in line to vote at the Fairfax Government Center.

Supporters of President Trump disrupted early voting at the polling place in Fairfax.

Workers prepared absentee ballots for mailing at the Wake County Board of Elections in Raleigh.