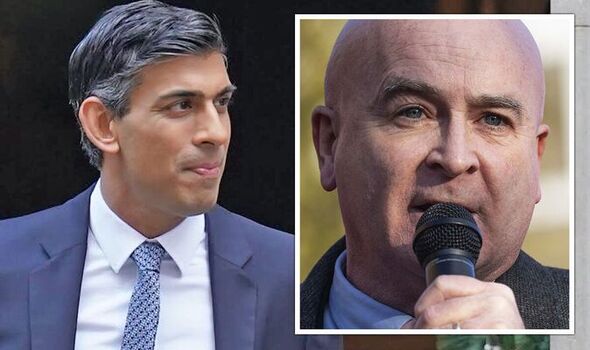 The Transport Strikes (Minimum Service Levels) Bill will force unions to ensure that train services do not grind to a halt completely when industrial action is taken.

The Prime Minister renewed his pledge to impose the new rules after Mr Lynch confirmed train workers will stage a walk out from 6pm on Christmas Eve to 6am to 27 December.

New strike dates were announced after the RMT union rejected an offer of an eight percent pay rise over 2022 and 203 and no compulsory redundancies before 2025.

The Prime Minister’s official spokesman said: “It’s incredibly disappointing that the RMT has chosen to take further damaging action instead of recognising this is a generous and fair deal that could have brought this dispute to an end.

“We believe the RMT need to take this offer seriously. We’ve been fair and reasonable in our approach.

“We’ve facilitated the sort of offer the RMT has been calling for, a fair pay rise with no compulsory redundancy.

“These additional strikes scheduled over Christmas mean the RMT risk driving away more people from the railways at a time when passengers and businesses should be taking advantage of this festive period.

“That will only add to the railways’ major funding issues that have to be put on a sustainable footing.”