Johnson returns to No 10 following Sunak and Javid resignations 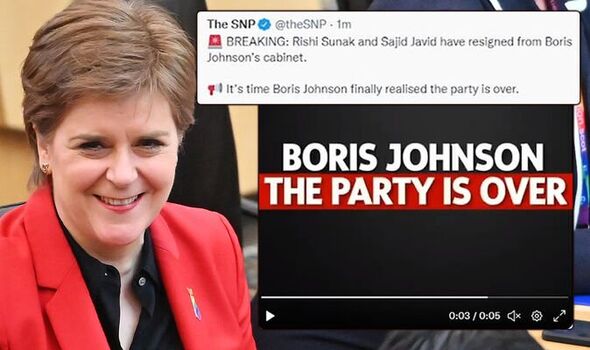 Taking the opportunity to hit the PM while he was down, the SNP tweeted jeering at the PM.

“It’s time Boris Johnson finally realised the party is over.”

Former Scottish Conservative leader Ruth Davidson has added to the pile-on, tweeting: “Pleased to see Sajid Javid and Rishi Sunak showing some backbone. This has gone on far too long.”

He added: “Boris Johnson must resign and the Tories must call a general election.

“Only Labour can replace this morally bankrupt and corrupt Tory government, and build a better future for the UK.”

Their statements launched a full frontal assault on the PM’s conduct in office, warning of a need for change.

Mr Johnson has faced enormous pressure to resign after it emerged he had appointed Tory MP Chris Pincher to a key welfare position in Government despite being aware of specific allegations of sexual assault against him.

A No. 10 spokesman had earlier claimed Mr Johnson was not aware of the allegations against Mr Pincher.

The SNP’s Westminster leader Ian Blackford said the resignations “had to be the end” for the beleagured PM.

He said: “We have no confidence in him and nor does his Health Secretary or Chancellor. Surely it is now just a matter of time, perhaps hours before Boris Johnson leaves office.

In his letter of resignation, Mr Sunak said “the public rightly expect Government to be conducted properly, competently and seriously”, adding “I believe these standards are worth fighting for and that is why I am resigning.”

Meanwhile, Mr Javid wrote: “We may not have always been popular, but we have been competent in acting in the national interest.

“Sadly, in the current circumstances, the public are concluding that we are now neither.”

In a TV interview just moments before the resignations were confirmed, the Prime Minister apologised for hiring Mr Pincher.

He said: “I think it was a mistake and I apologise for it. In hindsight it was the wrong thing to do.

“I apologise to everybody who has been badly affected by it.

“I want to make absolutely clear that there’s no place in this Government for anybody who is predatory or who abuses their position of power.”