Home » Politics » Stimulus Bill as a Political Weapon? Democrats Are Counting on It.

The $1.9 trillion package is a big bet by the party that it will restore a sense of normalcy by the 2022 elections and that voters will defy history and reward Democrats with more seats in Congress. 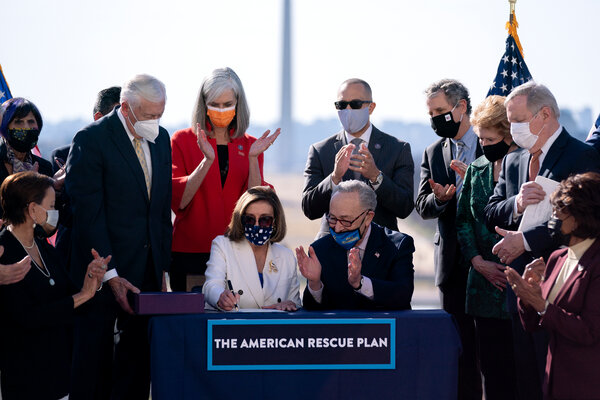 WASHINGTON — Triumphant over the signing of their far-reaching $1.9 trillion stimulus package, Democrats are now starting to angle for a major political payoff that would defy history: Picking up House and Senate seats in the 2022 midterm elections, even though the party in power usually loses in the midterms.

Democratic leaders are making one of the biggest electoral bets in years — that the stimulus will be so transformational for Americans across party lines and demographic groups that Democrats will be able to wield it as a political weapon next year in elections against Republicans, who voted en masse against the package.

Republicans need to gain only one seat in the Senate and just five in the House in 2022 to take back control, a likely result in a normal midterm election, but perhaps a trickier one if voters credit their rivals for a strong American rebound.

Yet as Democrats prepare to start selling voters on the package, they remain haunted by what happened in 2010, the last time they were in control of the White House and both chambers of Congress and pursued an ambitious agenda: They lost 63 House seats, and the majority, and were unable to fulfill President Barack Obama’s goals on issues ranging from gun control to immigration.

It has become an article of faith in the party that Mr. Obama’s presidency was diminished because his two signature accomplishments, the stimulus bill and the Affordable Care Act, were not expansive enough and their pitch to the public on the benefits of both measures was lacking. By this logic, Democrats began losing elections and the full control of the government, until now, because of their initial compromises with Republicans and insufficient salesmanship.

“We didn’t adequately explain what we had done,” President Biden told House Democrats this month about the 2009 Recovery Act. “Barack was so modest, he didn’t want to take, as he said, a ‘victory lap.’”

Now they are determined to exorcise those old ghosts by aggressively promoting a measure they believe meets the moment and has broader appeal than the $787 billion bill they trimmed and laced with tax cuts to win a handful of Republican votes in Mr. Obama’s first months in office.

Republicans say the Democratic bet is a foolhardy one, both because of how little of the spending is directly related to the coronavirus pandemic and because of fleeting voter attention spans. But Democrats say they intend to run on the bill — and press Republicans over their opposition to it.

“This is absolutely something I will campaign on next year,” said Senator Raphael Warnock of Georgia, who may be the most vulnerable incumbent Senate Democrat in the country on the ballot in 2022. Senator Gary Peters of Michigan, who heads the Democratic Senate campaign arm, said he would go on “offense” against Republicans who opposed the bill and sketched out their attack: “Every Republican said no in a time of need.”

Party lawmakers point out that the measure Mr. Biden signed on Thursday is more popular than the 2009 bill, according to polling; contains more tangible benefits, like the $1,400 direct payments and unemployment benefits; and comes at a time when the pandemic and former President Donald Trump’s continued appetite for big spending have blunted Republican attacks. 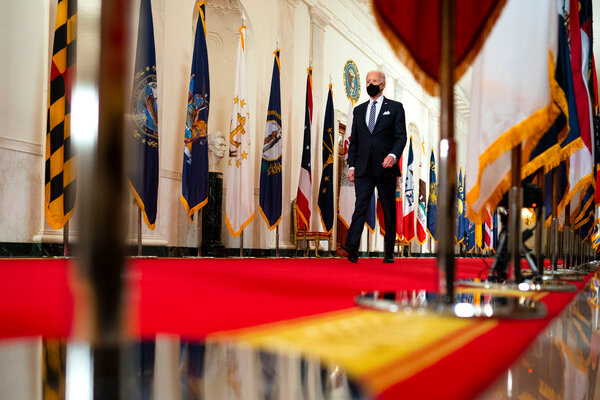 “People are going to feel it right away, to me that’s the biggest thing,” said Representative Conor Lamb, a Pennsylvania Democrat whose 2018 special election victory presaged the party’s revival. “Politics is confusing, it’s image-based, everyone calls everyone else a liar — but people are going to get the money in their bank accounts.”

And, Representative Sara Jacobs of California said, Democrats have “learned the lessons from 2009, we made sure we went back to our districts this weekend to tell people how much help they were going to get from this bill.”