Sadiq Khan says UK's Christmas will be 'the worst since WW2'

The Mayor of London has called on Boris Johnson to extend the Brexit transition period beyond the December 31 deadline in the wake of the emergence of a new strain of coronavirus and border closures between the UK and Europe. The French Government has suspended all travel between the UK and France for the next 48 hours after a more infectious strain of COVID-19 was identified in the South East of England.

The ban has blocked all major transport routes between the UK and mainland Europe via France – including Channel ports at Dover.

In a statement, the Labour Mayor insists the closure of key supply chains required the “full and undivided efforts of ministers”.

Mr Khan added the threat of a no deal Brexit was “reckless even before the latest surge in COVID cases.”

He released his statement ahead of a COBRA meeting this afternoon and received a furious backlash on Twitter. 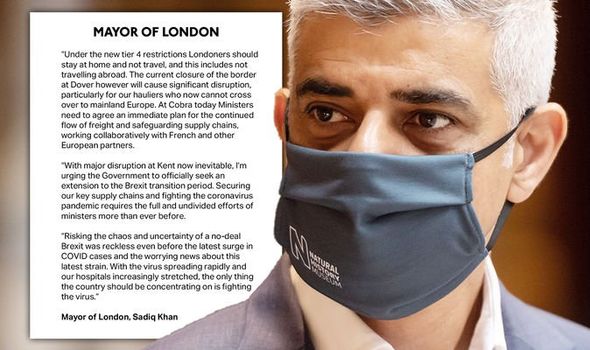 One user wrote: “Brexit negotiations have nothing to do with you.”

A second added: “Regardless of the rights or wrongs of Brexit, I do wonder what mandate the Mayor of London has to urge this

A third commented: “Never! Crawl back under your rock.”