Russia’s hackers appeared to be preparing to sow chaos amid any uncertainty around election results, officials said. 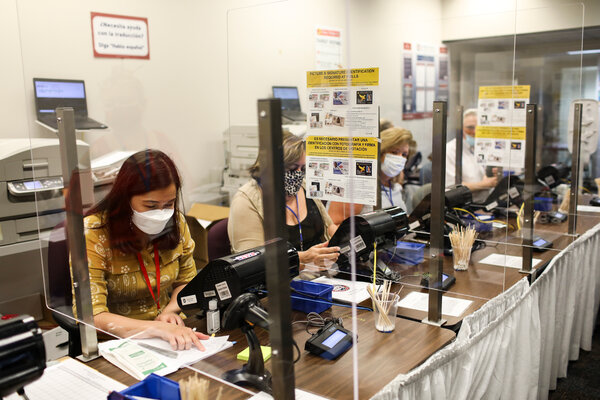 WASHINGTON — While senior Trump administration officials said this week that Iran has been actively interfering in the presidential election, many intelligence officials said they remained far more concerned about Russia, which in recent days has hacked into state and local computer networks in breaches that could allow Moscow broader access to American voting infrastructure.

The discovery of the hacks came as American intelligence agencies, infiltrating Russian networks themselves, have pieced together details of what they believe are Russia’s plans to interfere in the presidential race in its final days or immediately after the election on Nov. 3. Officials did not make clear what Russia planned to do, but they said its operations would be intended to help President Trump, potentially by exacerbating disputes around the results, especially if the race is too close to call.

There is no evidence that the Russians have changed any vote tallies or voter registration information, officials said. They added that the Russian-backed hackers had penetrated the computer networks without taking further action, as they did in 2016. But American officials expect that if the presidential race is not called on election night, Russian groups could use their knowledge of the local computer systems to deface websites, release nonpublic information or take similar steps that could sow chaos and doubts about the integrity of the results, according to American officials briefed on the intelligence.

Some U.S. intelligence officials view Russia’s intentions as more significant than the announcement Wednesday night by the director of national intelligence, John Ratcliffe, that Iran has been involved in the spreading of faked, threatening emails, which were made to appear as if they came from the Proud Boys, a right-wing extremist group.

Officials briefed on the intelligence said that Mr. Ratcliffe had accurately summarized the preliminary conclusion about Iran. But Tehran’s hackers may have accomplished that mission simply by assembling public information and then routing the threatening emails through Saudi Arabia, Estonia and other countries to hide their tracks. One official compared the Iranian action as single A baseball, while the Russians are major leaguers.