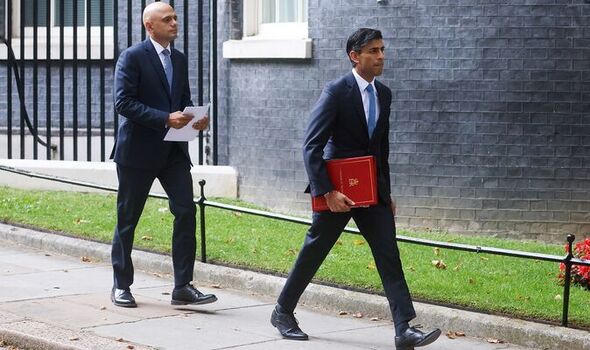 The ex-Cabinet minister said ­ Mr Sunak had “the leadership ­our country needs and the values our party needs”. Only three months ago, ex-health and home secretary Mr Javid had thrown his support behind Liz Truss as Tory leader.

But on Friday Mr Javid became the latest big name to endorse Mr Sunak – who has not yet declared he is standing.

By last night, more than 80 Tory MPs had signalled they would nominate Mr Sunak in next week’s leadership contest.

Candidates will need the backing of 100 Tory MPs by 2pm on Monday to take part.

In a statement on Twitter, Mr Javid said: “Our responsibility as public servants is to make decisions in the national interest, especially at a time like this.

“It is abundantly clear that Rishi Sunak has what it takes to match the challenges we face – he is the right person to lead our party and take the country forward.”

He added: “The only way for our party to reclaim our values and recover our reputation for stewardship is to move on from mistakes of the past and come together to focus on the future.” Mr Javid’s support for Ms Truss in the last leadership contest was a big blow for Mr Sunak, who saw him as a mentor in his early political career.

Former environment secretary George Eustice, who is backing ­ Mr Sunak, said he would not ­support a return of Boris Johnson as Tory leader.

Mr Eustice said: “I don’t see how it’s possible for him to find a route back just two months later, to be that unifying figure when the vast majority of Conservative MPs were ready to vote to say they had no confidence in him as recently as July.”

Meanwhile, in a bid to unite ­ the party, Mr Sunak’s backers have floated the idea of making Mr Johnson Home Secretary.

One said: “The next Con­servative leader needs a team from the top of Cabinet right down that reflects the breadth of talent and views in the Conservative Party.

“I think that means that Rishi should offer both Penny [Mordaunt] and Boris positions in that team.”

Another supporter said of the prospect of Mr Johnson entering the Home Office: “I think we need to do anything to keep the party together. I’d countenance anything.”

However, other Sunak backers were horrified by the idea of giving Mr Johnson a Cabinet role.

One said last night: “He is under formal investigation for ­misleading the House. Have people forgotten this?”

Mr Sunak quit as chancellor in July, on the same day as then home secretary Mr Javid.