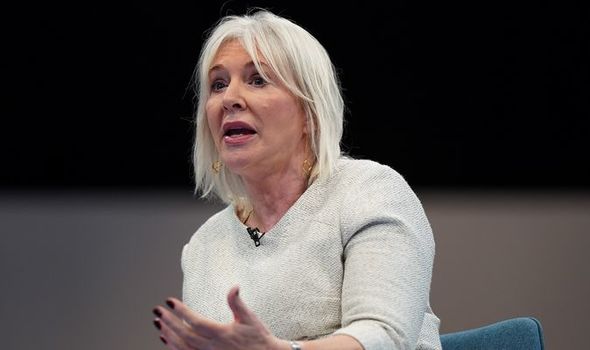 Nadine Dorries said executives at Facebook, Twitter, and other platforms would be held criminally liable within “three to six months” of the Online Safety Bill becoming law. At the moment, the proposed legislation offers tech bosses two years to tighten up their defences against trolls, bullies, and predators. But Mrs Dorries yesterday told the Bill’s draft committee she wanted to speed up the process of making site controllers accountable for toxic content.

She said: “It’s just a nonsense that platforms have been given two years to make themselves ready for what would be criminal action.

“So, to the platforms, take note now – it will not be two years. We are looking at truncating that to a much shorter time frame and that’s one of the areas as Secretary of State I want to go further in this Bill.”

She added: “They actually have the ability to put right what they’re doing wrong now.

“Why would we give them two years? Remove your harmful algorithms today and you will not be subjecting named individuals to criminal liability and prosecution.” Yesterday’s discussion echoes the demands of the Daily Express Unmask The Trolls campaign, which aims to rid the web of keyboard assassins.

Columnist Richard Madeley kick-started a drive to force operators to ban anonymous accounts from which users post hate without giving their real names.

This week, former Arsenal and France football star Thierry Henry told a conference that the tech companies make their profit from hate. The Culture Secretary said the Online Safety Bill was “possibly the most important piece of legislation to pass through Parliament” in her 16 years as an MP.

Under the new laws, tech firms face fines of up to 10 percent of global turnover for failing to protect their customers from hate and disturbing content.

Mrs Dorries also poked fun at Facebook chiefs Mark Zuckerberg and Nick Clegg for operating in the “metaverse” after the company name changed to Meta.

She told them they should “stay in the real world” where “you will be accountable to this Act”.