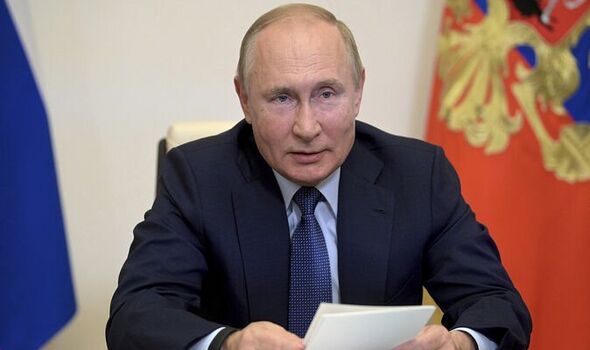 In a dire warning to western leaders the former Prime Minister of Ukraine Volodymyr Groysman has said that the war in his country is just the start of a long bloody conflict with the Baltic nations and Poland in Russia’s sights.

Speaking exclusively to the Sunday Express from a basement just outside Kyiv, Mr Groysman pleaded for western leaders to “close the sky of Ukraine” with a no fly zone insisting that his country can win a ground war against Russia’s army.

The interview took place as air raid sirens started to alert citizens around where Mr Groysman is hiding of another Russian missile or bomber attack.

He said: “I believe that Putin has decided to start World War 3. He can be treated as a modern Hitler, because what he is doing is that he began to terrorise the deocratic world. He is moving from the east to the west so Ukraine is just the first country on his way.

Mr Groysman, 44, a lawyer, is currently on a Moscow kill list along with other senior Ukrainian politicians such as President Zelensky.

He has stayed in Ukraine to help with humanitarian efforts and to support the Ukrainian ary with its fight to save his country.

But he is clear that Ukraine is not just fighting to save itself but on behalf of other countries in western Europe.

“I am fully convinced that this is really a war against the west, against the European countries, he admitted it himself when he said on several occasions that he feels threatened by NATO. We all understand that NATO doesn’t pose any threat to him because it is a defensive alliance.

“God forbid if Ukraine falls then those Eastern European countries (Baltic states and Poland) will surely be the next on the list for his aggression.”

He added: “I am fully convinced that this is really a war against the west, against the European countries, he admitted it himself when he said on several occasions that he feels threatened from NATO. We all understand that NATO doesn’t pose any threat to him because it is a defensive alliance.”

The former Prime Minister who left office after the election in 2019 is full of praise for Boris Johnson who he praises for leading the international efforts to take on Putin.

“I would like to take this opportunity to express on behalf of all of Ukrainians our big gratitude to the UK Government, Parliament and personally to Prime Minister Boris Johnson for their strong and very united position in support of Ukraine.

“I think that responsible European leaders like Prime Minister Johnson fully understand that the threat to their countries and other European states such as Poland and the Baltic states is absolutely realistic.

“I know Prime Minister Johnson personally and I met him on many occasions and I am sure that his position as well as the position of all British people will be unequivocal and will not be changed because many people still remember how Fascist Germany used to bombard London during World War 2. My only appeal that we together cannot let that happen again.”

He called on EU leaders to follow Mr Johnson’s example and realise this was an opportunity to defeat Putin – a man he refers to constantly as “Hitler”.

“European leaders should realise it is high time for them to become real heroes. European leaders have someone who they can treat as role models like Johnson or Biden. They have to stop thinking about their weaknesses.”

He has asked for a “technical solution” to be found which would close Ukraine’s airspace and leave the war on the ground.

He said: “If you ask me my only priority is to get rid of those missiles and planes which are flying over Ukraine and bombing our cities.

He also said that unless he was stopped, Putin would go much further.

“We can confirm that Putin is already using banned weapons like vacuum bombs in Ukraine. If he is already doing that I believe that it is quite realistic that he could use other types of weapons of mass destruction like the chemical weapons.”

He went on: “Look at yesterday they have bombarded a maternity hospital in Mariopo. It is outrageous, it really some kind of Nazi tactics they are using in Ukraine.

“They want to frighten the population, they have surrounded several cities. People are sitting in basements without electricity, water or food. This is really a criminal way to conduct this war. This is a genocide.”

Mr Groysman, who has Jewish heritage and had family members killed in the Holocaust to the Nazis sees Putin as a Hitler figure who wants to wipe out the Ukrainians.

As Prime Minister, Mr Groysman had to deal with Putin’s ethnic cleansing of the Donbas region and Crimea when he took control of them in 2014.

He has no doubt that Putin will one day have to face trial in the Hague.

“He will not be alone there because he will be joined by the minister of defence and commanders who gave orders in bombarding peaceful cities, hospitals, kindergartens etc. This is a difficu;t turbulent historical time but we need to get through this challenge all together. We need to stay united.”

But he insists that with the right support the Ukrainian army can defeat Russia if the skies above the country are closed to Putin’s bombers and missiles.

“I believe the whole world now has a window of opportunity, a unique chance to stop this international criminal and bully Putin. The only way we can beat him is by defeating him physically. That is what Ukrainian servicemen are doing right now on the ground in Ukraine. They are sacrificing their lives in order to achieve that goal.

“Against this background I am calling on our international partners to be quicker to make decisions and be more resolute, for us to protect as many lives of our military and civilians as possible because each day more and more civilians die.”