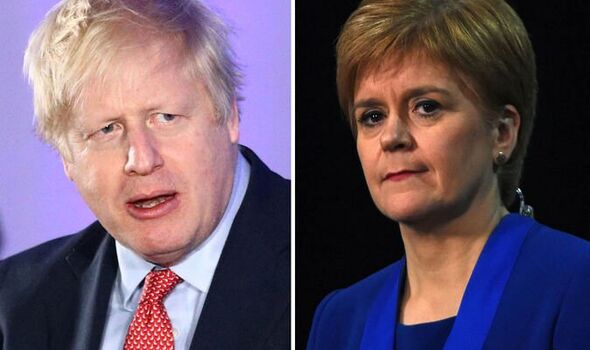 The Prime Minister addressed Scottish Tory party members last night before heading to Blackpool to speak to Tories in England today at the Conservative spring conference. The Prime Minister warned the SNP’s leader that opposition to fresh drilling only played into Vladimir Putin’s hands as he wages war in Ukraine.

In a speech to the Scottish Conservative conference in Aberdeen, he also attacked the SNP’s “constitutional myopia” over her demands to hold a second independence referendum.

Ms Sturgeon has said she will not support the Cambo oil field west of Shetland or other new North Sea projects.

But Mr Johnson pledged to continue investment in the industry and support tens of thousands of jobs during the UK’s transition to net zero by 2050.

And he pledged to make “sensible use” of the country’s own natural hydrocarbon resources”.

Mr Johnson warned: “Are we not crazy to be talking about completely shutting down domestic production? Only to buy oil and gas at a vast mark up from Vladimir Putin’s Russia.”

In his attack on the SNP’s plan for another independence referendum, he said: “This is not the time for more delectable disputations on the constitution when our European continent is being ravaged by the most vicious war since 1945.”