WASHINGTON — The Pentagon acknowledged on Friday that a U.S. drone strike in Afghanistan on Aug. 29 that officials said was necessary to prevent an attack on American troops was a tragic mistake that killed 10 civilians, including seven children.

The explosives the military claimed were loaded in the trunk of a white Toyota sedan struck by the drone’s Hellfire missile were most likely water bottles, and a secondary explosion in the courtyard in a densely populated Kabul neighborhood where that attack took place was probably a propane or gas tank, the official said. In short, the car posed no threat at all, investigators concluded.

An official familiar with the investigation acknowledged that the driver of the car, Zemari Ahmadi, a longtime worker for a U.S. aid group, had nothing to do with the Islamic State, as military officials had previously asserted. Mr. Ahmadi’s only connection to the terrorist group appeared to be a fleeting and innocuous interaction with people in what the military believed was an ISIS safehouse in Kabul, an initial link that led military analysts to make one mistaken judgment after another while tracking Mr. Ahmadi’s movements in a sedan for the next eight hours.

“I offer my profound condolences to the family and friends of those who were killed,” Gen. Kenneth F. McKenzie Jr., commander of United States Central Command, told reporters at a Pentagon news conference Friday. He said the U.S. was “exploring the possibility of ex gratia payments” to compensate the families of the victims.

The general said the strike was taken “in the profound belief” that ISIS was about to attack Kabul’s airport, as the organization had done three days before, killing more than 140 people, including 13 American service members.

The findings of the inquiry by the military’s Central Command mirrored a New York Times investigation of video evidence, along with interviews with more than a dozen of the driver’s co-workers and family members in Kabul. The Times inquiry raised doubts about the U.S. version of events, including whether explosives were present in the vehicle, whether the driver had a connection to ISIS, and whether there was a second explosion after the missile struck the car.

Military officials cited the investigation by The Times and other media organizations as providing valuable visual and other evidence that forced the military to reassess the judgments that led it to believe, falsely, that the sedan posed a threat.

As recently as Monday, the Pentagon was still asserting that the last U.S. drone strike in the 20-year American war in Afghanistan was necessary to prevent an attack on American troops.

Defense Secretary Lloyd J. Austin III and Gen. Mark A. Milley, the chairman of the Joint Chiefs of Staff, had said that the missile was launched because the military had intelligence suggesting a credible, imminent threat to Hamid Karzai International Airport in Kabul, where U.S. and allied troops were frantically trying to evacuate people. General Milley later called the strike “righteous.” 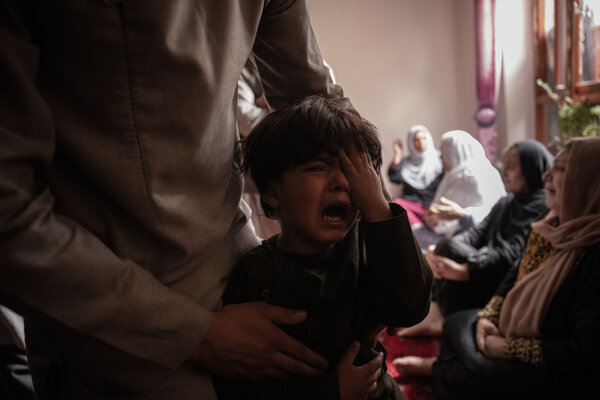 On Friday, General Milley, sent a tacit acknowledgment that he spoke too soon.

“In a dynamic high threat environment, the commanders on the ground had appropriate authority and had reasonable certainty that the target was valid, but after deeper post-strike analysis, our conclusion is that innocent civilians were killed,” General Milley said in a statement. “This is a horrible tragedy of war and it’s heart-wrenching and we are committed to being fully transparent about this incident.”

General McKenzie said that the conditions on the ground contributed to the errant strike. “We did not have the luxury to develop pattern of life” before the strike, he said.

Military officials said they did not know the identity of the car’s driver when the drone fired, but they had deemed him suspicious because of his activities that day: He had possibly visited an Islamic State safe house, they said, and at one point he loaded into the vehicle what they thought could be explosives.

Military officials defended their assessment that the safe house was a hub of ISIS planning, based on a combination of intercepted communications, information from informants and aerial imagery.

But after reviewing additional aerial video and photographs, military investigators concluded that their initial judgment about the driver was wrong, an error that colored their views of every subsequent stop he made that day while driving around Kabul.

Understand the Taliban Takeover in Afghanistan

Who are the Taliban? The Taliban arose in 1994 amid the turmoil that came after the withdrawal of Soviet forces from Afghanistan in 1989. They used brutal public punishments, including floggings, amputations and mass executions, to enforce their rules. Here’s more on their origin story and their record as rulers.

Who are the Taliban leaders? These are the top leaders of the Taliban, men who have spent years on the run, in hiding, in jail and dodging American drones. Little is known about them or how they plan to govern, including whether they will be as tolerant as they claim to be. One spokesman told The Times that the group wanted to forget its past, but that there would be some restrictions.

How did the Taliban gain control? See how the Taliban retook power in Afghanistan in a few months, and read about how their strategy enabled them to do so.

What happens to the women of Afghanistan? The last time the Taliban were in power, they barred women and girls from taking most jobs or going to school. Afghan women have made many gains since the Taliban were toppled, but now they fear that ground may be lost. Taliban officials are trying to reassure women that things will be different, but there are signs that, at least in some areas, they have begun to reimpose the old order.

What does their victory mean for terrorist groups? The United States invaded Afghanistan 20 years ago in response to terrorism, and many worry that Al Qaeda and other radical groups will again find safe haven there. On Aug. 26, deadly explosions outside Afghanistan’s main airport claimed by the Islamic State demonstrated that terrorists remain a threat.

How will this affect future U.S. policy in the region? Washington and the Taliban may spend years pulled between cooperation and conflict, Some of the key issues at hand include: how to cooperate against a mutual enemy, the Islamic State branch in the region, known as ISIS-K, and whether the U.S. should release $9.4 billion in Afghan government currency reserves that are frozen in the country.

Times reporting had identified the driver as Mr. Ahmadi. The evidence suggests that his travels that day actually involved transporting colleagues to and from work. And an analysis of video feeds showed that what the military may have seen was Mr. Ahmadi and a colleague loading canisters of water into his trunk to bring home to his family.

The military official said on Friday that a subsequent review concluded, as did the Times investigation, that the suspicious packages were nothing more than water, and possibly a package the size of a laptop computer.

Mr. Ahmadi, 43, worked as an electrical engineer for Nutrition and Education International, a California-based aid group. The morning of the strike, his boss called from the office around 8:45 a.m. and asked him to pick up his laptop.

Since the strike, U.S. military officials justified their actions by citing an even larger blast that took place afterward in the courtyard where Mr. Ahmadi made his final stop.

“Because there were secondary explosions, there is a reasonable conclusion to be made that there was explosives in that vehicle,” General Milley said earlier this month.

But an examination of the scene of the strike, conducted by the Times visual investigations team and a Times reporter the morning afterward, and followed up with a second visit four days later, found no evidence of a second, more powerful explosion.

Experts who examined photos and videos pointed out that, although there was clear evidence of a missile strike and subsequent vehicle fire, there were no collapsed or blown-out walls, no destroyed vegetation, and only one dent in the entrance gate, indicating a single shock wave.

The military official acknowledged all this on Friday, and said that investigators now believed the second explosion was from a propane tank in the courtyard, or possibly the gas tank of a second vehicle in the courtyard.

While the U.S. military initially said the drone strike might have killed three civilians, Times reporting showed that it killed 10, including seven children, in a dense residential block. The military has now also come to that conclusion, after watching aerial imagery that shows three children coming out to greet the sedan, one of them taking the wheel of the car after Mr. Ahmadi got out.