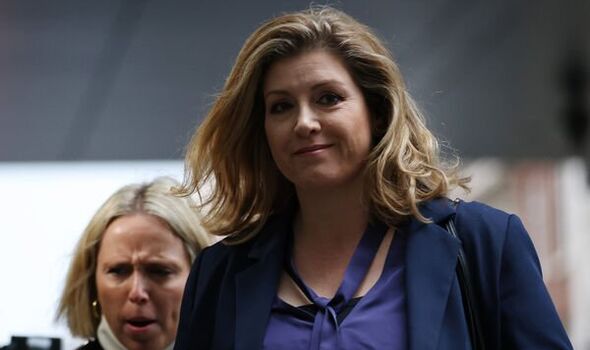 Ms Mordaunt, who has the public support of 24 MPs, would need to achieve the milestone by 2pm today.

“Rishi will be continuing to talk to colleagues tomorrow morning before nomination papers go in and discussing how best to unite the party and take the country forward.”

Early yesterday, Commons Leader Ms Mordaunt denied claims she had offered to support Boris Johnson, insisting: “I’m in this to win it.”

Pitching herself as the unity candidate, Navy reservist Ms Mordaunt, 49, said the country “needs a fresh face” and one who can “get things to work”.

She said people “are fed up of the factional rows” in the Conservative Party. But she stopped short of revealing details on key policy areas.

Ms Mordaunt said she had the numbers to get through to the members’ ballot and be well placed to take over from Liz Truss as Prime Minister.

“I am doing this because I think I am best placed to bring the party together. We have got to come together.”

“People are fed up of the factional rows, the focus on ourselves. We have got to remember why we came into this in the first place. It’s to serve our constituencies and communities.”

Key ally Damian Green said many of Ms Mordaunt’s supporters were yet to declare their backing. In the last leadership contest, Ms Mordaunt had said she was a “halfway house” between Ms Truss and Mr Sunak and could unite the party.

She called claims she had offered support to Mr Johnson in exchange for a senior Cabinet role as “completely false”.

Before Mr Johnson dropped out of the leadership race, Ms Mordaunt said: “It’s not about him, it’s not about me, it’s about the public. It’s about what we do, and about people being able to see a GP.”

“It’s about people being able to get through winter without being worried about keeping heating and the lights on.”

But she came under fire for failing to outline details of her tax and spending plans.

Ms Mordaunt refused to confirm her spending plans – with Chancellor Jeremy Hunt having committed to a tight fiscal future. And she would not be drawn on raising benefits in line with inflation, the pensions triple lock, three per cent defence spending and no health service cuts. She said: “I’m not going to talk about the details of that package.”

Challenged over her support for raising benefits in line with inflation a few weeks ago, Ms Mordaunt said: “We have always protected people.”

“What we must do is remember that our mandate lies in the 2019 manifesto.”

Mr Green said he was confident Ms Mordaunt would get the nominations she needed.

Ms Mordaunt added: “What this country needs is a fresh face, someone that can unite the Conservative Party and get things to work in this country.”

“I have held nine ministerial roles – three in Cabinet. I was a minister before Rishi Sunak was even elected to Parliament but, more important than all of that, I’ve got real-life experience.”

“I know what people are going through because I’ve been there. I know how complicated their lives are getting, how stressful they are getting and what it is like to scrabble pennies to get the fare to work.”

“I’m a savvy campaigner, I am doing this because I think I am best placed to bring the party together”.