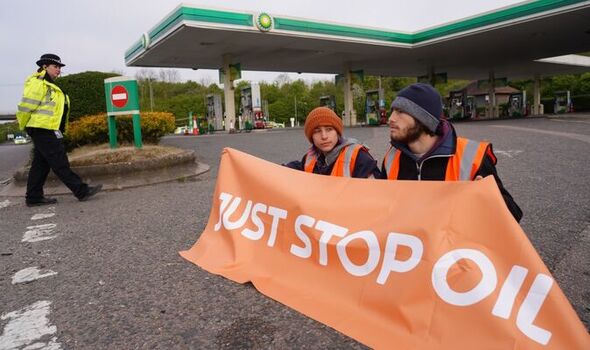 She will condemn “a supremely selfish minority” in a bid to rally support for the Government’s new Public Order Bill, which contains measures designed to take on groups such as Insulate Britain and Just Stop Oil.

Ms Patel will tomorrow tell the House of Commons: “I will not stand by and let anti-social individuals keep causing misery and chaos for others.”

The Government is launching a second attempt to introduce tough new laws after the House of Lords rejected similar proposals earlier this year. Ministers were forced to back down and remove the measures from the Police, Crime, Sentencing and Courts Act, following a lengthy battle with peers.

Just Stop Oil activists have carried out a series of blockades of fuel terminals in south-east England and the Midlands, and tied themselves to goalposts at football matches. More than 1,000 arrests have been made, with their actions blamed for fuel shortages.

Insulate Britain protestors glued themselves to motorways and busy main roads, and have been accused of blocking emergency vehicles including ambulances.

Opening the Second Reading debate in the House of Commons, Priti Patel is expected to say: “Their actions divert police resources away from the communities where they are needed most … and we are seeing parts of the country grind to a halt. This is reprehensible behaviour and I will not tolerate it.”

She will insist that the Government backs the right to democratic protest, arguing there is a clear distinction between this and the criminal acts targeted by the Bill.

Mrs Patel is expected to say: “The Public Order Bill will empower the police to take more proactive action to protect the rights of the public to go about their lives in peace. However passionately one believes in a cause, we do not make policy through mob rule in this country.

“I will not be deterred from backing the police and standing up for the law-abiding majority, and that’s what the Public Order Bill does.”

The Bill will make it an offence to obstruct major transport routes, with a maximum penalty of six months’ imprisonment, an unlimited fine, or both.

Courts will gain new powers to impose Serious Disruption Prevention Orders on protesters who have caused disruption in the past, and require them to wear an electronic tag. Breaking one of these orders will become a criminal offence.

There will be a new offence of “locking on” or attaching yourself to an object in order to cause disruption.

The Bill will also make it easier for police in London to set conditions on protests by allowing officers with the rank of Commander or above to do so. Currently, conditions can only be set by assistant commissioners or those more senior.

The Government’s proposals received a boost after a YouGov poll found 63% of the public were in favour of tougher measures to tackle disruptive “lock-on” tactics. However, they are likely to receive further opposition in the House of Lords.

Some Labour MPs are also opposed, with former Shadow Cabinet member Andy McDonald accusing the Government of proposing “some of the most reactionary and authoritarian legislation in living memory”.