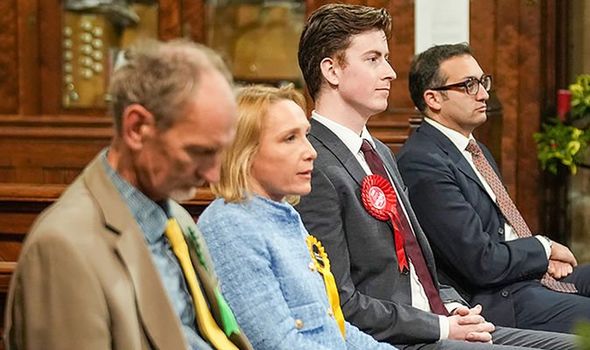 The Liberal Democrats are now favourites to win the North Shropshire seat in Thursday’s crunch vote. Defeat in the pro-Brexit constituency would be a fresh blow to Mr Johnson’s authority following a torrid few weeks that have seen him lurch from crisis to crisis.

It comes as polling shows collapsing public opinion for Mr Johnson, the Conservative Party and the Government.

The Survation study for ITV’s Good Morning Britain shows Labour on 39 percent, with the Tories on 32 percent ‑ a new low for the party since Mr Johnson became leader in July 2019.

Sir Keir Starmer ‑ who visited a vaccination centre in Loughborough yesterday ‑ has become the preferred candidate for “best prime minister”, with 39 percent (up seven points) for the first time since October 6, 2020.

Boris Johnson is on 30 percent, down 14 points since October 7 this year.

It reflects a tumultuous few weeks since the resignation of former North Shropshire MP Owen Paterson. Some 57 percent of those polled think the Prime Minister should resign.

Lib Dem campaigners stress that the result is hard to predict, given variables such as turnout and the number of Labour and Green supporters who decide to vote tactically.

But the party says it is “neck and neck” in the usually ultra-safe Conservative seat, which was held by Mr Paterson in the 2019 election with a near-23,000 majority and has been Tory for all but two of the last 190 years.

The by-election was called when Mr Paterson quit after Mr Johnson abandoned efforts to change the MPs disciplinary system to save the former environment secretary from being punished for breaking rules on paid lobbying.

A key factor in the result could be how many traditional Tory voters who are now dissatisfied with the party and with Mr Johnson decide to stay at home or even vote Lib Dem.

A source said: “There is a strong anti-Boris sentiment at the moment, which is going to let the Lib Dems in.”