Home » Politics » Making History, Ginsburg Is Honored at a Capitol Divided Over Replacing Her

WASHINGTON — Justice Ruth Bader Ginsburg, who won trailblazing legal victories for women’s rights before ascending to the nation’s highest court, broke her final barriers on Friday, becoming the first woman and the first Jewish American to lie in state in the United States Capitol.

In a ceremony choreographed by Speaker Nancy Pelosi to give the women of Congress a leading role, Justice Ginsburg was eulogized as a persistent warrior for justice whose example had inspired generations of women and girls. Members of Congress, top military commanders and the Democratic presidential nominee all came to pay their respects on the final day of public mourning for the justice — as did her beloved trainer, who dropped to the floor of the National Statuary Hall to salute her with three push-ups before her flag-draped coffin.

“Justice did not arrive like a lightning bolt, but rather through dogged persistence, all the days of her life,” said Rabbi Lauren Holtzblatt of Adas Israel Congregation in Washington, the only person to give remarks during the brief ceremony. “Real change, she said, enduring change, happens one step at a time.”

The tribute took place inside a Capitol deeply divided over replacing Justice Ginsburg so close to the presidential election. Its somber tone was a stark contrast to the partisan acrimony that promised to consume Washington in the coming days, as President Trump was said to have chosen a conservative successor to the liberal icon and Republicans raced to confirm a person who would tip the Supreme Court decisively to the right.

Even amid the gestures of respect, the political divide was on display as lawmakers honored Justice Ginsburg, who died last Friday at 87. The top Republican congressional leaders, Senator Mitch McConnell of Kentucky and Representative Kevin McCarthy of California, were absent from the ceremony, and only a few of the party’s lawmakers came to pay their respects afterward.

At least one Democrat, Representative Ayanna S. Pressley of Massachusetts, wore a mask emblazoned with “Honor her wish,” referring to the justice’s dying request that the president elected on Nov. 3 choose her successor. (Protesters chanted the phrase at Mr. Trump on Thursday, when he visited the Supreme Court to pay respects to Justice Ginsburg, booing and jeering him.) 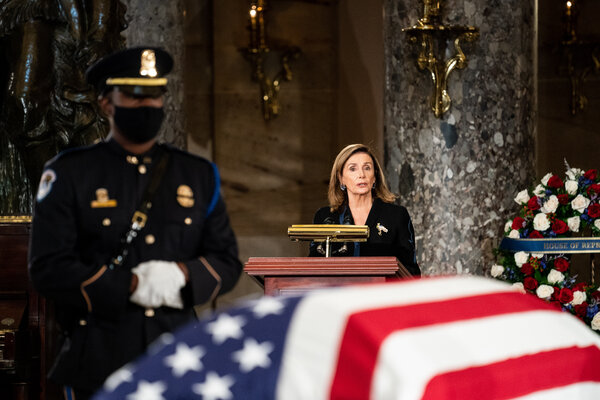 Former Vice President Joseph R. Biden Jr., the Democratic presidential candidate, stepped off the campaign trail to attend the ceremony. He told reporters as he exited the Capitol that he had “wonderful memories” of helping install Justice Ginsburg in 1993, when he was the chairman of the Senate Judiciary Committee.

But that era, when the Senate confirmed Justice Ginsburg 96 to 3, is clearly over. Even as Democrats celebrated Justice Ginsburg’s legacy on Friday on the House side of the Capitol, where they control the majority, White House officials and Senate Republicans busied themselves with preparations of their own to usher in a conservative successor by Election Day. Only one of their leaders, Representative Steve Scalise of Louisiana, the second-ranking Republican, attended the ceremony.

Mr. Trump plans to announce on Saturday that Judge Amy Coney Barrett of the United States Court of Appeals for the Seventh Circuit is his choice, according to people close to the process who asked not to be identified disclosing the decision in advance. The White House was already reaching out to senators about scheduling meetings next week with the prospective nominee, according to two people familiar with the outreach who insisted on anonymity to discuss it.

They were proceeding despite a new Washington Post-ABC poll showing that a vast majority of Americans would, like Justice Ginsburg, prefer that the winner of the election select her successor.

Democrats are fiercely opposed to filling the seat so close to Nov. 3, especially after Republicans refused to consider a liberal nominee put forward by President Barack Obama in 2016 because they said voters should have a say in an election year. But with a 53-to-47 majority in the Senate, Republicans have the votes they need to press ahead.

Like the memorial held at the Supreme Court on Wednesday, the honors at the Capitol were brief and mostly limited to family and a small contingent of lawmakers. Justice Ginsburg’s family planned to hold a private burial next week at Arlington National Cemetery.

Only about three dozen Americans have received the honor of lying in state at the Capitol: presidents, military leaders and members of Congress, all of them men. Rosa Parks, the civil rights icon, is the only other woman granted a similar distinction, but as a private citizen, she lay “in honor.” Senator Frank R. Lautenberg of New Jersey, who was Jewish, lay in repose in the Senate chamber in 2013, a similar but lesser honor that has been given to prominent senators.

Denyce Graves, the American mezzo-soprano and a friend of Justice Ginsburg’s, performed “Deep River” and “American Anthem” in tribute to the justice’s love of opera. “America, I gave my best to you,” she sang, as a few audience members dabbed at their eyes.

In a stirring eulogy, Rabbi Holtzblatt, who also spoke at the Supreme Court on Wednesday, honored Justice Ginsburg as “our prophet, our North Star and our strength for so very long,” telling the story of a legal advocate and jurist who bent her life toward justice.

The daughter of a bookkeeper in Brooklyn, Justice Ginsburg’s rise in American law and life was anything but a given, the rabbi said. She buried her mother the day before her high school graduation, fought sexism in law school and on the job market, and was denied a job by every New York law firm she applied to.

Later, after achieving towering legal success as a private lawyer and then as a justice, she fought cancer five times, remaining on the bench until her death last Friday. Rabbi Holtzblatt said the justice embodied the Torah command inscribed on a framed piece of art that hung in her chambers: “Justice, justice you must pursue.”

“Pursuing justice took resilience, persistence, a commitment to never stop,” Rabbi Holtzblatt said. “Now, she must be permitted to rest, after toiling so long for all of us.”

The ceremony was tightly restricted because of concerns about the coronavirus pandemic. Members of the public were not included, and those invited to pay their respects did so in small groups.

Elizabeth Salas, Justice Ginsburg’s housekeeper, was seated to the left of Mr. Biden during the ceremony. Later, the Joint Chiefs of Staff formed a silent array around the coffin, standing solemnly with their wives.

Amid a procession of bowed heads, signs of the cross and hands over hearts, Bryant Johnson, an Army veteran who served as the justice’s longtime trainer, gave his own gesture of affection, dropping to the floor to do three full push-ups.

Ms. Pelosi, herself a historic figure as the country’s first female speaker, made only brief remarks opening the ceremony. But she ensured that women led the mourning.

Under her direction, small groups of female lawmakers were the first to encircle the coffin, a few women gently placing their hands on the American flag lying on top as they said goodbye. They snapped selfies with a portrait of the justice and with one another. Later, as rain began falling, they flanked the Capitol steps as Justice Ginsburg’s remains were carried out.

“She broke so many barriers,” Senator Kamala Harris of California, Mr. Biden’s running mate, told reporters. “And I know that she did it intentionally, knowing that people like me could follow.”

A smattering of Republican women joined in, including Representatives Susan W. Brooks of Indiana, Jaime Herrera Beutler of Washington, Debbie Lesko of Arizona Martha Roby of Alabama and Elise Stefanik of New York.

“I really wanted to pay tribute to her legacy,” Ms. Brooks told reporters after the ceremony, adding that she had been a lawyer before serving in Congress. “I have tremendous respect for what Justice Ginsburg did for the state of American law and for women, not just in our country, but in the world.”

Rabbi Holtzblatt recounted a story told by Justice Ginsburg about a private moment with Justice Sandra Day O’Connor, the first woman to serve on the Supreme Court, reflecting on the silver lining to all the barriers they had faced as women in the legal profession.

“Suppose we had come of age in a time when women lawyers were welcome at the bar,” Justice Ginsburg recalled Justice O’Connor telling her. “You know what? Today we would have been retired partners from some large law firm. But because it was not open for us, we had to find another way, and both end up on the United States Supreme Court.”