Home » Politics » Lose the poison or we rip up the agreement! – Lord Frost warns EU over trade deadlock 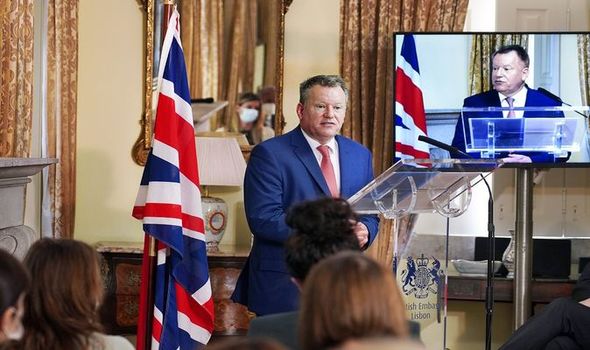 Unless the EU eases ­border rules the UK may rip up the Brexit agreement, Lord Frost warned last night. The Cabinet minister said Boris Johnson would take the “nuclear option” if the bloc refuses to budge. He added that Britain’s plan for an “extremely light touch” trading scheme was “a better way forward”. Throwing down the gauntlet in a speech in Lisbon, Lord Frost urged EU chiefs to lose the “poison” from the deadlock for good.

He told diplomats: “Let us both be ambitious and agree a better way forward. Let’s agree arrangements which we will both implement and which can in fact be implemented, because they command acceptance and respect across Northern Ireland.”

He continued: “With some effort of will, we could still, despite all the problems, be in a position where the poison is drawn from this issue entirely and it is removed from the diplomatic top table once and for all.”

But Lord Frost warned that the UK is willing to trigger Article 16, which allows either side to in effect override much of the Brexit agreement, if both sides cannot find common ground. “It is this Government, the UK Government, that governs Northern Ireland.”

He added: “Northern Ireland is not EU territory. It is our responsibility to safeguard peace and prosperity and that may include using Article 16.

“We would not go down this route gratuitously or with any particular pleasure but it is our fundamental responsibility to safeguard peace and prosperity in Northern Ireland and that is why we cannot rest until this situation is addressed.”

The Government also wants to reverse its previous deal on the oversight role of the European Court of Justice (ECJ) – the highest EU court. Lord Frost warned that it would be a “historic misjudgment” if the EU did not consider the changes. His extraordinary address came a day before EU Commission vice-president Maros Sefcovic unveils its plan to fix the Northern Ireland situation.

The existing protocol has created barriers to trade across the Irish Sea and led to shortages of some goods that are supplied from Great Britain. Unionist politicians claim it undermines Northern Ireland’s constitutional position in the UK. Lord Frost said that the new proposal would support the Good Friday Agreement.

He continued: “We have a short, but real, opportunity to put in place a new arrangement, to defuse the political crisis that is brewing, both in Northern Ireland and between us.” The peer also accused the EU of being an organisation “that doesn’t always look like” it wants the UK to succeed.

The peer called the existing protocol “the biggest source of mistrust” with the EU, with border rules having “completely lost consent in one community in Northern Ireland. There is a widespread feeling in the UK that the EU did try to use Northern Ireland to encourage UK political forces to reverse the referendum result or at least to keep us closely aligned.

“And, moreover, that the protocol represents a moment of EU overreach when the UK’s negotiating hand was tied, and therefore cannot reasonably last in its current form. The situation has now moved on. We now face a very serious situation. The protocol is not working.”

Simon Coveney, Ireland’s Foreign Minister, claimed Lord Frost was setting demands that he knew the EU could not accept: “This is being seen across the European Union as the same pattern over and over again – the EU tries to solve problems, the UK dismisses the solutions before they’re even published and asks for more.”

Leo Varadkar, its Trade Minister, said the UK demand to end the ECJ’s role in policing the protocol was “very hard to accept. I don’t think we could ever have a situation where another court could decide what the rules of the single market are.”

Steve Aiken, a Unionist member of the Northern Ireland Assembly, claimed that the existing trade protocol “does not have the consent of the Unionist and pro-Union population”.