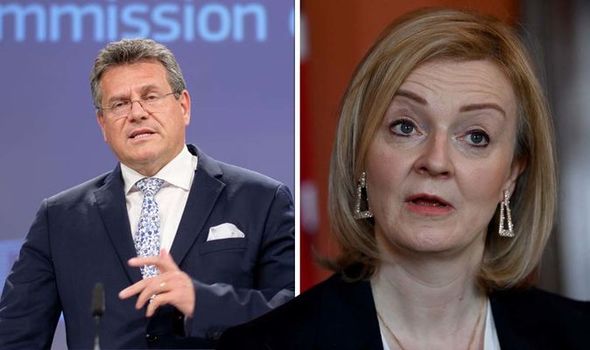 Ms Truss will tell European Commission vice president Maroš Šefčovič that the EU and the UK have a “shared responsibility” to find a solution to the Northern Ireland protocol which protects “peace and stability” and works for all sides.

The protocol was intended to prevent the need for customs checks along Northern Ireland’s border with the Republic but it has been blamed for disruption to trade with Great Britain. There is anger among unionists who claim it undermines the province’s status as full part of the United Kingdom.

Ms Truss, who is seen as a leading contender to succeed Boris Johnson at the helm of the Conservative party, told the Sunday Express: “Fundamentally this is about peace and stability in Northern Ireland. Whether you voted Leave or Remain, represent the UK or EU, the focus must be on protecting the Belfast Good Friday Agreement and fixing the protocol.

“That is my message in these negotiations. Rather than re-running past arguments, we need to focus on delivering for the people of Northern Ireland, finding practical solutions to problems on the ground and maintaining the integrity of the United Kingdom.

“I look forward to meeting Vice President Šefčovič again tomorrow to review progress. There is a deal to be done, and we need to make it happen.”

The meeting follows “cordial” discussions between the pair at the foreign secretary’s country residence, Chevening House, earlier this month. Ms Truss and Mr Šefčovič will sit down together for a “closed meeting” before being joined by senior UK and EU officials.

While in Australia last week, Ms Truss held daily calls with the UK negotiations team as technical talks got underway in Brussels. She spoke to Mr Šefčovič on Friday for a stock take on progress so far.

Ms Truss warned last week that the protocol is “failing on its own terms” and has “lost the consent of the Unionist community”. She is concerned that “needless paperwork has put hundreds of businesses off trading within the United Kingdom” and says that “only goods actually going to the European Union should face checks and processes”.

Former Northern Ireland secretary and leading Brexiteer Theresa Villiers urged Ms Truss to take a tough stance, push for the replacement of the protocol and demand the end of any role for the European Court of Justice (ECJ).

She said: “We need a tough approach. It is just not acceptable to have the integrity of our internal market put under strain in this way.

“The protocol itself envisages that it could be replaced. That is what our negotiating objective should be, including removal of ECJ involvement.

“Lord Frost’s robust approach delivered an excellent result in the EU trade negotiations. That is how we protect our national interest and ensure we have got Brexit done for the whole of our country.”

Matthew O’Toole, an SDLP member of Northern Ireland’s Stormont Assembly, defended the protocol and said there was no appetite for “political theatrics” from the UK Government.
He said: “It is utterly clear what most people and businesses in Northern Ireland want: They want the protocol to work. It is already protecting our economy from the worst of Brexit and leading to huge opportunities as demonstrated by the massive increase in north-south trade.

“The UK and EU should he focussed on making sure we take advantage of those opportunities, and also on resolving outstanding issues around smoothing the movement of goods from Great Britain into Northern Ireland – including [a] comprehensive veterinary agreement. There is no appetite or need for more political theatrics from the Tory Government, just a focus on practical solutions and implementation.”

Ben Habib, a businessman and ex-Brexit Party MEP who has challenged the legality of the protocol, said Ms Truss should be prepared to unilaterally suspend it by triggering Article 16.

He said: “No sovereign nation could accept being subject to the supremacy of a foreign court and for its own people not to be able to trade freely amongst themselves. [It] is high time to put that right.

“Negotiations have been going on far too long already. Too much damage has already been done. This has to stop.

“If Maros Šefčovič does not readily agree these entirely reasonable demands, negotiations must be ended and unilateral action taken.

“Our government was elected to deliver the entire country out of the European Union. They cannot claim Brexit is done unless and until the Protocol is either drastically altered or ditched.”

Sir Jeffrey Donaldson, the leader of the DUP, has warned Conservative MPs that it is “simply indefensible” for the people of Northern Ireland to be “subject to EU laws” without them having a say. He claims the protocol is costing the province’s economy “£2.5million each and every day”.