An exclusive poll by Techne UK also shows she is supported by twice as many voters who want a Tory Prime Minister, compared with rival Rishi Sunak. Her policy of cutting taxes got the backing of almost two thirds of all voters (60 per cent), Mr Sunak’s plans to deal with debt first appealed to 29 per cent.

It comes after the Daily Express revealed Ms Truss wants to appoint the first female Chancellor, Therese Coffey, to push through a bold economic policy, including £30billion of tax cuts.

These tax plans are backed by more than three quarters of Tory voters while to Mr Sunak’s strategy is liked by just 20 per cent.

The clash over taxation has been the centrepiece of fiery TV debates between the hopefuls but 57 per cent back Ms Truss’s way of thinking.

Additionally, almost eight in 10 Tory voters are behind Ms Truss on her plan to temporarily ditch the green levies on bills.

Elsewhere, the polling will deliver a blow to Labour leader Sir Keir Starmer. 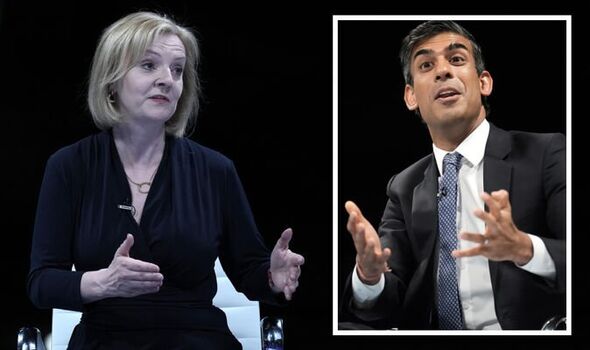 After a week where he had to sack his transport spokesman Sam Tarry for defying his will and joining an RMT picket line, just 35 per cent see him as the best person to lead Britain.

In contrast, 36 per cent want a Conservative in charge – with 20 per cent of that figure choosing Ms Truss.

The weekly Express/Techne tracker poll revealed the Tories are just seven points behind Labour on 33 per cent (up one) compared to 40 per cent (down one).