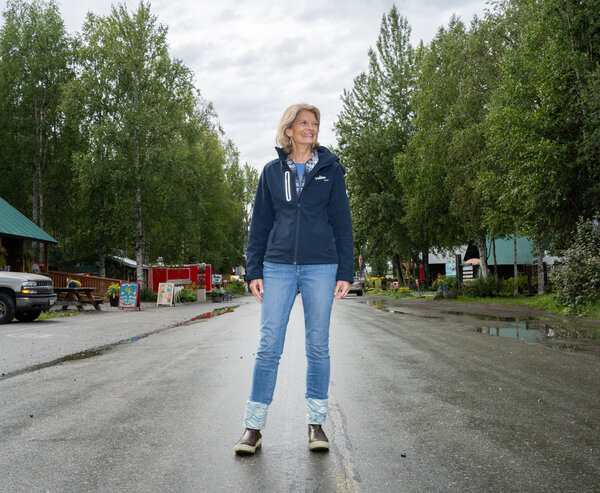 Senator Lisa Murkowski of Alaska, a centrist Republican seeking a fourth full term in Washington, advanced to the general election along with her chief rival, Kelly Tshibaka, in the state’s Senate primary race, according to The Associated Press.

Ms. Murkowski and Ms. Tshibaka each earned enough votes to advance to the general election in the fall as part of Alaska’s new open primary system. Ms. Murkowski is hoping to fend off a conservative backlash over her vote in the Senate to convict former President Donald J. Trump of inciting the Jan. 6, 2021, attack on the Capitol.

With an estimated 50 percent of the vote reported, Ms. Murkowski and Ms. Tshibaka were neck and neck at just over 40 percent apiece. The nearest rival after them was in the single digits.

Ballots are still being counted, and two other candidates will also advance as part of the state’s top-four system, but it was unclear which two.

Ms. Murkowski, 65, is the only Senate Republican on the ballot this year who voted to convict Mr. Trump in his impeachment trial. She has been frank about her frustrations with Mr. Trump’s hold over the Republican Party, though she has maintained the backing of the Senate Republican campaign arm.

She has also repeatedly crossed the aisle to support bipartisan compromises and Democratic nominees, including the nomination of Justice Ketanji Brown Jackson to the Supreme Court and the confirmation of Deb Haaland, the Interior secretary. And she is one of just two Senate Republicans who support abortion rights and have expressed dismay over the Supreme Court’s decision to overturn Roe v. Wade, a move that eliminated the constitutional right to an abortion after almost 50 years.

Those stances have rallied both national and local Republicans against her, and her impeachment vote garnered her a censure from Alaska’s Republican Party. Mr. Trump, furious over her vote to convict him, summoned his supporters to line up behind Ms. Tshibaka, a former commissioner in the Alaska Department of Administration, who fashioned herself as an “America First” candidate who could more adequately represent conservatives in the state.

“It’s clear that we are at a point where the next senator can either stand with Alaska or continue to enable the disastrous Biden administration that is damaging us more every day,” Ms. Tshibaka wrote in an opinion essay published days before the primary. “When I’m the next senator from Alaska, I will never forget the Alaskans who elected me, and I will always stand for the values of the people of this great state.”

But the new open primary system, paired with the use of ranked-choice voting in the general election, was designed in part with centrist candidates like Ms. Murkowski in mind, and was championed by her allies in the famously independent state.

Voters in November can rank their top four candidates. If no candidate receives a majority, officials will eliminate the last-place finisher and reallocate his or her supporters’ votes to the voters’ second choices until one candidate has more than 50 percent of the vote.

While she has never crossed that threshold in previous elections, Ms. Murkowski has overcome tough odds before: In 2010, she triumphed memorably with a write-in campaign after a stunning primary loss to a Tea Party challenger. That victory came largely because of a coalition of Alaska Natives and centrists.

Ms. Murkowski has leveraged her seniority and her bipartisan credentials to make her case to voters in Alaska, highlighting the billions of dollars she has steered to the state through her role on the Senate Appropriations Committee and her role in passing the $1 trillion bipartisan infrastructure law.

She invokes her friendships with Democrats like Senator Joe Manchin III of West Virginia and the legacies of Alaska lawmakers like former Senator Ted Stevens and Representative Don Young, who died in March, to show that there is still a place in Congress for her style of legislating.

“You’ve got to demonstrate that there are other possibilities, that there is a different reality — and maybe it won’t work,” Ms. Murkowski said in an interview this year. “Maybe I am just completely politically naïve, and this ship has sailed. But I won’t know unless we — unless I — stay out there and give Alaskans the opportunity to weigh in.”

Her challengers, however, are seeking to capitalize on the frustrations toward Ms. Murkowski in both parties. In addition to branding her as too liberal for the state, Ms. Tshibaka has seized on simmering resentment over how Ms. Murkowski’s father, Frank, chose her to finish out his term as senator when he became governor in 2002.