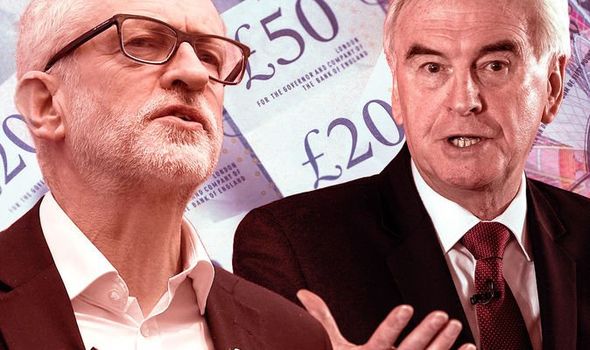 Their feud was triggered by Mr McDonnell’s dismay that Mr Corbyn refused to back down with hardline disciplinary matters against Jewish MP Dame Margaret Hodge who had questioned the party leader about antisemitism in the Commons. In one shadow cabinet meeting Mr McDonnell was said to be “gripped by an almost biblical temper” at the decision to proceed with action against the veteran MP.

Incendiary extracts from the book, Left Out: The Inside Story of Labour Under Corbyn, reveal that Mr Corbyn’s office was on the “warpath” over the matter.

“The decision would trigger the most profound breach between Corbyn and John McDonnell, that they would ever experience,” it is claimed.

“Some in the leader’s office argue that it was never repaired. At its heart, the dispute was political.

“Would Labour discipline a septuagenarian Jewish MP who had vented about racism, albeit aggressively, as it would any other member? Or would it compromise by having the issue dealt with off the books.

Mr Corbyn backed the former option. Those who saw the political danger in following the letter of the rulebook rather than conceding in the interests of what they called “the Project” were exasperated.

“McDonnell was among them. With [General Secretary of the Labour Party Jennie] Formby on holiday in Turkey, he turned to [Jeremy Corbyn’s Chief of Staff Karie] Murphy and urged her to cancel the disciplinary action. Murphy refused.”

The embarrassing details were revealed yesterday in extracts  published in The Times.

“To them, it appeared to be a classic McDonnell manoeuvre: a short-term tactical compromise for the sake of the Project,” the authors claim.

“But McDonnell’s reaction was motivated by a deep anger as much as it was a cool political pragmatism or a desire for control.”

“A question that preoccupied aides was whether McDonnell and Corbyn were comrades or personal friends first,” the books states.

One senior aide is quoted as saying: “They never spoke for months. Never spoke the whole summer.”

Another Labour staffer said: “It was absolutely true that they weren’t talking.

“They were walking past each other in the corridor and blanking each other, it was that level of not talking.”

Former senior advisor Andrew Murray, a Unite trade unionist, told the authors: “He is very empathetic Jeremy, but he’s empathetic with the poor, the disadvantaged, the migrant, the marginalised, the people at the bottom of the heap.

“But, of course, the Jewish community today is relatively prosperous.”