Home » Politics » Keir Starmer slapped down in fierce exchange over COVID rules ‘but what would you do?!’

A seemingly exasperated Felicity Evans, BBC Wales political editor, asked Sir Keir Starmer what he would do if he were Prime Minister as the pair spoke about a travel ban preventing people from areas of the UK with high levels of coronavirus from entering Wales. Speaking on Thursday, the day before Welsh First Minister Mark Drakeford announced restrictions in a written statement on Friday afternoon, Sir Keir accused Prime Minister Boris Johnson of failing do a “very small ask”.

But Ms Evans asked the Labour leader: “What do you want the Prime Minister to do then? Because as you know Mr Drakeford is asking him to impose travel restrictions on COVID hotspots in England?

To which Sir Keir replied: “Yeah, the Prime Minister just needs to be clear that people shouldn’t travel from high infection rate areas into areas in Wales where there are lower cases of infection.”

Ms Evans went on: “But with respect though, the Prime Minister has said that and has said there is guidance in place – but the First Minister wants there to be rules, legally enforceable rules.” 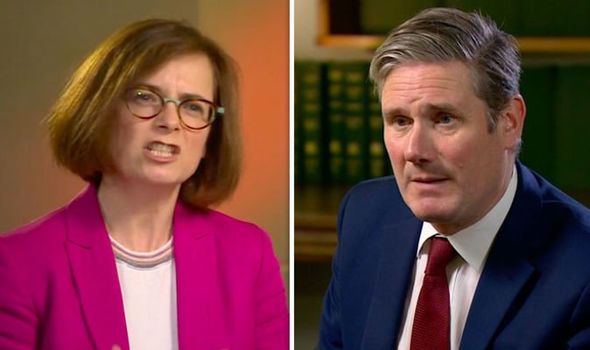 Ms Evans asked: “And the agreement is what then?

To which Sir Keir said: “Well the two of them could agree – but at the moment,” to which Ms Evans interrupted and said: “But agree to what?”

Frustrated, Ms Evans continued to ask: “What would you do if you were Prime Minister? and Mr Drakeford said I want to you to impose travel restrictions on people going in or out of COVID hotspots in England.”

To which, a blustered Sir Keir said: “I would pick up the phone to the First Minister and reach an agreement immediately with him that he was satisfied with.

But not satisfied, the journalist pressed saying: “Which would be what? To say yes ok then Mr Drakeford?

And Sir Keir finally conceded: “There has to be a way to control the virus and unfortunately if that means people can’t travel in the way they did before then that’s got to be put in place.”

The Labour leader’s response came despite him earlier saying during the interview he hoped it wouldn’t come to travel restrictions, adding “I don’t think it needs to”.

The restrictions came into force from 6pm on Friday, and immediately prevented travel from areas in England in tiers two and three, the central belt of Scotland, and the whole of Northern Ireland.

Mr Drakeford said: “The number of cases across Wales is growing and our health service is coming under pressure.

“To keep Wales safe, the Welsh Government is therefore amending the Regulations to make it clear that people living in areas with a high-prevalence of coronavirus in England, Scotland and Northern Ireland would not be able to travel to parts of Wales where there is a low prevalence.

“It is vital that we keep communities which have low levels of infection as safe as possible and this sensible and necessary restriction will help prevent the virus moving from more urban, highly populated areas to more sparsely populated areas.

“It is already prohibited for people to travel into a local health protection area here whether they come from other parts of Wales, the UK or from other countries.

“As with the rules for Local Health Protection Areas there are some exceptions such as work or providing charitable or voluntary services when those cannot be carried out where they live.

“We also recognise that this is a particularly difficult time for children and young people and we will also amend the regulations to allow children to leave their local health protection areas to play sport or participate in other activities such as drama or dance classes which are so important to their mental and physical health and wellbeing.

“If we all continue to work together, we can protect ourselves and families and keep Wales safe.”