For the vice president, another run at the Oval Office is a near certainty. How her current responsibilities help or hurt that bid is an open question. 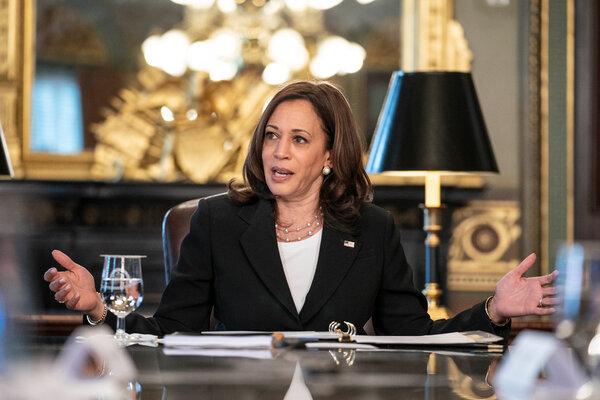 Hi. Welcome to On Politics, your wrap-up of the week in national politics. I’m Lisa Lerer, your host.

Is Kamala Harris drawing the shortest straws in the White House?

This week, President Biden announced that Ms. Harris would lead the administration’s effort to protect voting rights, a task he immediately said would “take a hell of a lot of work.”

And on Sunday, Ms. Harris leaves for her first trip abroad, visiting Mexico and Guatemala as part of her mandate to address the root causes of migration from Central America that are contributing to a surge of people trying to cross the United States’ Southern border.

The central political question facing Ms. Harris has never been whether she will run for president again. It’s when and how.

Yet for a history-making politician with big ambitions, Ms. Harris has adopted an early agenda that has left some Democrats fretting about the future of a politician who is already positioned as a presidential-nominee-in-waiting.

Both immigration and voting rights are politically fraught problems with no easy solutions. Democrats’ expansive election legislation has faltered in the Senate, with moderate party lawmakers like Senator Joe Manchin III of West Virginia expressing concerns about the bill.

And despite the best efforts of her team, Ms. Harris has become the administration’s face — sometimes quite literally — for the influx of migrants, including tens of thousands of unaccompanied children, at the Southern border.

The allies cite the challenges Mr. Biden took on during his first term as vice president — including leading the White House effort to draw down troops in Iraq and overseeing the implementation of the stimulus bill — and argue that voters reward politicians for tackling hard issues, even if they remain unresolved.

And many argue that there are no easy problems in a country still grappling with a devastating pandemic, continued economic uncertainty and a divisive racial reckoning.