WASHINGTON — The Justice Department and the F.B.I. have embarked on a nationwide manhunt to track down scores of people who attacked the Capitol last week, according to law enforcement officials, as they grapple with the fallout from the widespread government failure to protect the building.

Investigators are pursuing more than 150 suspects for prosecution, a total that is almost certain to grow, an official said. Analysts are also scouring intelligence to identify any role that domestic terrorist organizations or foreign adversaries may have played in radicalizing Americans who were among the rioters, according to a law enforcement official briefed on the investigations.

Some indication had emerged that at least some assailants initiated a more organized attack, Representative Tim Ryan, Democrat of Ohio and the chairman of the House subcommittee that has oversight of the Capitol Police, told reporters on Monday. Initial reports on Wednesday afternoon about pipe bombs planted at the nearby Republican and Democratic Party headquarters drew some law enforcement attention away from the breach that was unfolding at the Capitol, Mr. Ryan said, suggesting a “level of coordination.”

Two Capitol Police officers have also been suspended, according to Mr. Ryan: one who was seen in photographs with rioters and another who walked among the crowds wearing a hat emblazoned with President Trump’s “Make America Great Again” campaign slogan. The Capitol Police have also opened internal inquiries into about 10 to 15 officers’ actions during the violence, though the nature of the inquiries were unclear, and Mr. Ryan cautioned that he had seen no sign that any officers helped coordinate the attack.

In the sprawling Justice Department criminal inquiry run out of the F.B.I.’s Washington field office — the country’s second largest, with about 1,600 employees — agents and support staff have established a nationwide dragnet to identify members of the mob. At least five people died during the attack and in its immediate aftermath, including a police officer. In particular, the F.B.I. is working closely with the Capitol Police and the Metropolitan Police Department in Washington to track down those whose attacked law enforcement.

The F.B.I. has moved quickly to ease some bureaucratic hurdles to making arrests, and it has received more than 70,000 photographic and video tips after asking for the public’s help in identifying suspects. Agents were also scrubbing airline passenger manifests and video of air travelers to and from Washington to find potential suspects.

But some prosecutors have expressed concerns that the Justice Department is creating a bottleneck by funneling prosecutions through Washington. The lack of public appearances by top national security officials in the Trump administration has also prompted criticism that the federal government is failing to provide the reassurance, information or leadership that it typically would in a time of national crisis.

The Justice Department has already gathered enough information to charge and arrest more than a dozen people, some of whom have emerged as faces of the attack, such as a man carrying Speaker Nancy Pelosi’s lectern and another photographed with his feet up on a desk in her office.

It was not clear whether agents planned to make more arrests on Monday.

The striking images from the attack demonstrated the spectrum of people involved in the violence. “Stop the steal” signs were prominent — visual evidence that Mr. Trump’s false claims of a fraudulent election had resonated with a broad coalition of conservatives, evangelicals, conspiracy theorists, militia groups, anti-Communist activists, neo-Nazis and other white supremacists.

“These are all diverse people with different ideologies, but the commonality is they all follow the leadership of Donald Trump,” said Gregory W. Ehrie, a former senior F.B.I. agent who was the bureau’s domestic terrorism czar from 2013 to 2015 and is now the vice president of law enforcement and analysis at the Anti-Defamation League.

“We are seeing this extremist group form in real time, and it is led by Donald Trump,” he added. “These are tough comparisons to make for all of us, but he stood in front of a crowd and told them to go to the Capitol, and everyone listened.”

Mr. Ehrie said the F.B.I. would have to figure out how to strengthen its domestic terrorism operations while balancing concerns about First Amendment protections for hate speech.

“There will definitely be a readjustment,” he said. “I am glad I am not sitting in that seat anymore.”

Some images of the riot showed what seemed to be an organized effort among people in matching military gear moving as a unit through the crowds and into the Capitol, which has raised fears that some of those involved acted as part of a well-coordinated effort to storm the building.

The Justice Department manhunt is highly unusual and complex. Like the investigation into the Boston Marathon bombing in 2013, the F.B.I. is relying heavily on video from cellphones and security cameras to identify the perpetrators.

But while other notorious, deadly attacks on the country like the Oklahoma City bombing or the terrorist attacks on Sept. 11, 2001, were conducted by foreign adversaries or involved a few people acting in secret, the riot on Wednesday was carried out by hundreds of American citizens who were encouraged by the president of the United States and in many cases openly boasted about their actions on social media.

Investigators are also dealing with the fallout from the government failure to protect one of the most secure buildings in Washington while Vice President Mike Pence and hundreds of members of Congress convened, jeopardizing the line of leadership succession, which includes Mr. Pence and congressional leaders like Speaker Nancy Pelosi and Senator Charles E. Grassley, Republican of Iowa and the president pro tempore of the Senate.

After the mob stormed the building, damaged property, stole computer equipment and other files and attacked officers, an overwhelmed Capitol Police — the force designated to protect the complex — allowed all but about a dozen to leave peacefully. That failure to detain the suspects created a major obstacle for federal investigators, who must now fan out and look for them across the country.

Despite the high-profile nature of the attack and the complexity of the investigation, no top federal law enforcement or homeland security official has gone in front of television cameras or answered questions, working in near silence as Congress and the White House debate how best to respond to the role the president played. Democrats released a draft article of impeachment on Monday, accusing Mr. Trump of inciting the insurrection. A top prosecutor in Washington last week tamped down the prospect that the Justice Department would investigate him.

The silence is a stark contrast to the Trump administration’s response last year to protests against police violence and racism. Former Attorney General William P. Barr instructed all 93 U.S. attorneys’ offices to aggressively pursue charges — including sedition — against rioters at protests, to the surprise of some prosecutors.

The acting attorney general, Jeffrey A. Rosen, has instead informed federal prosecutors around the nation, in a memo from his top deputy, that all investigations should be run out of the U.S. attorney’s office in Washington and the main Justice Department there, which would take the lead on all prosecutions. Any efforts to charge suspects in their home states needed to be run by officials in Washington first for approval. 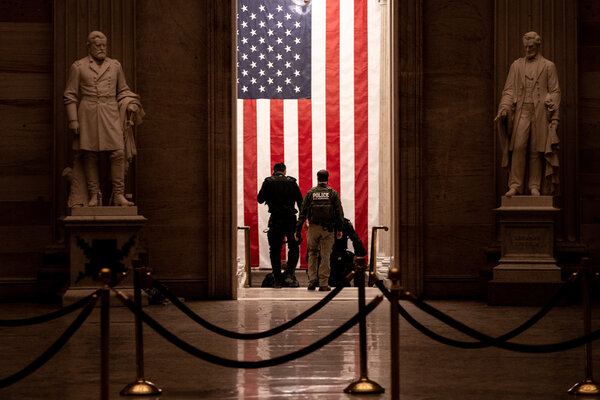 The directive has confounded prosecutors nationwide, according to four who spoke on the condition of anonymity because they were not authorized to speak with reporters. While the assailants broke the law in Washington, some of them might have organized in their home states and traveled to take part in the attack.

And though the siege last week took place in Washington, giving the U.S. attorney there jurisdiction, prosecutors elsewhere said they believed they could help the department more speedily bring assailants to justice.

Prosecutors had also been given no clear reason for the restrained response from headquarters, they said.

F.B.I. leaders have taken a more aggressive internal posture, issuing three memos on Saturday to agents in the field about the bureau’s efforts to find and prosecute all of the people involved in the attack on the Capitol.

One memo reminded agents of three federal statutes that they can apply in filing criminal complaints: one against seditious conspiracy that is rarely used and more commonly invoked violations of laws against federal rioting and civil disorder. Another email intended to ensure that all agents approached the investigation in a uniform manner included two attachments: a list of questions to ask all potential suspects and boilerplate language that could be used to establish probable cause in their court documents.

The investigation also touches on the extent to which law enforcement and military personnel aided the rioters.

Capt. Emily Rainey, an Army officer who told The Associated Press that she had transported more than 100 people to Washington for the Trump rally, is being investigated by the Army for any connection to the riots, according to a military official. Ms. Rainey had resigned from her post in October but was not set to leave until this spring.

Multiple law enforcement officers in New Hampshire, Pennsylvania, Texas and Washington State have been suspended or referred for internal review for attending the rally.

Investigators said that much was still unknown about the attack and might remain elusive in the days leading up to the inauguration.