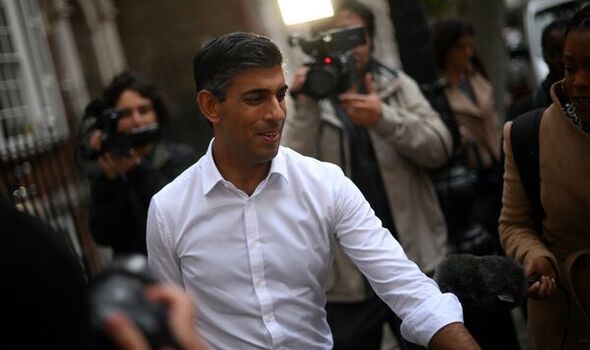 The former chancellor said he would “steer our economy through the toughest of times”, in the face of rocketing interest rates and the threat of recession.

The Tory leadership frontrunner spoke as he received politically huge endorsements from different wings of the Conservative Party.

One backer declared: “We cannot go back, we have to look forward”.

Former home secretary Suella Braverman backed Mr Sunak, saying he was the only person who could build a “team” of Conservatives from every wing of the party.

As ministers face a £40billion black hole in public finances, Mr Sunak admitted the financial crisis engulfing the country was bigger than the cash crisis during the pandemic.

But he said the opportunities were “phenomenal” if the right decisions were made.

Mr Johnson’s premiership imploded during claims the former PM lied about the Partygate scandal and a row over the suspension of Tory MP Chris Pincher.

Mr Sunak, who now has at least 146 public endorsements, said: “I served as your chancellor, helping to steer our economy through the toughest of times.”

“The challenges we face now are even greater. But the opportunities, if we make the right choice,are phenomenal.”

He added: “I have the track record of delivery, a clear plan to fix the biggest problems we face, and I will deliver on the promise of the 2019 manifesto.”

“There will be integrity, professionalism and accountability at every level of the Government I lead and I will work day in and day out to get the job done.”

Mr Sunak’s supporters say they want to avoid the toxicity of a return by Mr Johnson, which could split the party down the middle.

Ms Braverman said: “We need to provide leadership, stability and confidence to the British people. We cannot indulge in parochial or nativist fantasies.”

“I am prepared to reach out to work with colleagues in the national interest, even if we have disagreed in the past.”

“We need to move beyond Leaver or Remainer, One Nation or ERG, Right of the party or Left of the party, wets or Thatcherites. Now we all need to compromise and unite
as optimistic and competent Conservatives. One person can build that team: Rishi Sunak.”

He said: “He will follow through on the current policy. Again, no one should be in doubt about this. The EU should understand there’s not going to be a change of policy.”

Sir Geoffrey Cox, who, as attorney general, was part of the Brexit “war Cabinet” from 2018 to 2020, also threw his weight behind Mr Sunak.

Sir Geoffrey said Mr Sunak was “now the best suited to manage the peculiar demands of these times”.

He added: “It is time to get back to serious Government”. Mr Sunak had warned that Liz Truss’s tax plans would cause inflation to spiral and send the cost of Government through the roof.

Ministers are now urgently trying to reassure the markets to prevent interest rates from ballooning to the point where millions cannot afford their mortgage payments.

Tory Theresa Villiers said yesterday she would vote for Mr Sunak. The MP, who represents Chipping Barnet in north London with a majority of 1,212, supported him in the last leadership election.

But according to current polling figures, she would be out of a job at the next general election.

Ms Smith said: “I intend to back Rishi to be Prime Minister, acting in the national interest and achieving the stability and opportunity our nation needs.”

Neil O’Brien, who resigned from Mr Johnson’s Government in the summer in a joint letter with former leadership contender Kemi Badenoch, said he was “sad” Ms Badenoch had decided not to stand this time.

He said he had respect for Mr Johnson, but added “now is not the time”.