WASHINGTON — Hours after a top Senate official informed Democrats that they could potentially have more chances to use a complex budget maneuver to push through their agenda without any Republican votes, Senator Bernie Sanders, the Vermont independent, was on television outlining the breadth of liberal ambitions.

The musing by Mr. Sanders, the chairman of the Senate Budget Committee, reflected the high hopes that Democrats have that a new ruling from the chamber’s parliamentarian will open more avenues for them to push a wide range of their priorities through a Congress where they have precariously small majorities.

“The devil is in the details, and we don’t know the details yet — that’s going have to be negotiated, and better understood,” Mr. Sanders said in an interview on Tuesday. “It gives us the possibility of going forward with more than one piece of legislation, and that’s obviously advantageous to what we’re trying to do.”

All of it could be easier thanks to the parliamentarian’s opinion issued Monday that the budget resolution passed in February could be reopened to include at least one more round of reconciliation, which allows for measures governing taxes and spending to be protected from filibusters. That could give Democrats more chances to steer around Republican opposition and push through major budgetary legislation.

The process is fraught with challenges, including strict rules that limit what can be included, and Democrats would still have to muster 50 votes for any proposal, a tall order for some of their more expansive ideas.

But the newfound leeway could ultimately ease the way for some of their most ambitious endeavors. It could allow them to break down some of Mr. Biden’s proposals, including his two-part infrastructure plan to address both an ailing public works system and the economic inequities facing the nation’s work force, into smaller, more palatable pieces.

Activists have also urged Mr. Biden to consider more remote possibilities, like using reconciliation to provide a pathway to citizenship for some of the millions of undocumented immigrants living in the United States, including farmworkers, essential workers and those brought to the country as children known as Dreamers.

It remains unclear how and when Democrats might take advantage of the ruling. But pressure is mounting for them to push the boundaries of what the ruling party can do when it controls both congressional chambers and the White House.

In an interview on Tuesday, Senator Chuck Schumer of New York, the majority leader, said the decision marked “an important step, and it adds an extra arrow in our quiver.” But he declined to disclose how exactly the ruling would impact his legislative strategy going forward, including passage of a massive public-works plan Mr. Biden released last week.

“We’ll have to get together as a caucus and discuss things — as we always do — about the best place to use it,” he said.

The initial guidance from Elizabeth MacDonough, the parliamentarian, seems to have given Mr. Biden and his congressional allies at least one more chance to use the reconciliation process before the fiscal year ends Sept. 30, as well as more opportunities in the next fiscal year. Ms. MacDonough told lawmakers on Monday evening that Senate rules appear to allow a revision to the budget plan they used to pass the $1.9 trillion stimulus law that would enable them to add new elements under another round of the fast-track reconciliation process, according to Mr. Schumer.

The details of the ruling have not been made public, and Mr. Schumer and top Democratic staff members will most likely have to return to Ms. MacDonough with additional questions about how to proceed.

But for now, her decision has buoyed some activists who have pressed for Mr. Biden and Democrats to be more aggressive about using their power to force through big policy changes. They are likely to intensify pressure on the White House and leading Democrats in the coming weeks to use the newfound tool.

Most immediately, Democrats believe the ruling could provide additional flexibility for winning enactment of Mr. Biden’s plans for as much as $4 trillion in new economic investments — including rebuilding electric grids, fighting climate change, reducing poverty and helping millions of women work and earn more.

Since Mr. Biden won the White House, his advisers have been consumed with contingency planning to get his agenda through Congress, including trillions of dollars in new government spending at least partly offset by tax increases on corporations and the rich. When Democrats won a pair of Georgia runoff elections that handed them Senate control in January, reconciliation became the centerpiece of many of those plans. 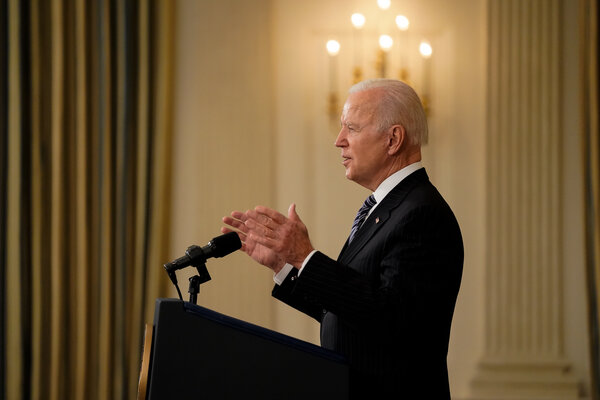 It would be a way to bypass what Biden aides worried would be entrenched Republican opposition to the amount of pandemic aid they believed was needed, and then a vehicle to carry his longer-term economic agenda of spending on roads, bridges, water pipes, clean energy, child care, education and more.

But the administration has seen firsthand that the process will not work for all its priorities: Ms. MacDonough tossed a provision to raise the federal minimum wage out of Mr. Biden’s relief package because she deemed it in violation of budget rules. Activists argue that legalizing some unauthorized immigrants would affect the budget by making them eligible for government benefits and increasing tax revenue, but it is not clear whether the parliamentarian would allow it as part of a reconciliation measure.

Both Mr. Schumer and Mr. Sanders stressed that they had not committed to a particular strategy for reusing reconciliation. Determining how Democrats prioritize and sequence their legislative priorities, Mr. Sanders said, “is a difficult issue that we wrestle with every day.”

White House officials insist, publicly and privately, that Mr. Biden is committed to pursuing a bipartisan agreement with Republicans on his infrastructure plan. Business groups are also eager to broker a deal on the issue, though they and Republicans have expressed strong opposition to Mr. Biden’s proposed tax increases.

Mr. Biden continues to believe “that there is a bipartisan path forward” on the issue, Jen Psaki, the White House press secretary, told reporters on Tuesday. But she left the door open to moving the bill through the more partisan process.

“As you know, reconciliation is a mechanism for passing budgetary bills in Congress,” she said. “We will leave the mechanisms and the determination of the mechanisms to leaders in Congress. But, right now, less than a week after he announced the American Jobs Plan, our focus is on engaging with Democrats and Republicans, with staff, with committee staff, inviting members to the White House next week.”

Lobbyists and congressional staff members say they expect Mr. Biden to give Senate moderates a short window to begin to build a bipartisan consensus on the plan — and to move on quickly if no such deal materializes. Ms. Psaki suggested on Tuesday that Mr. Biden wanted to see a quick start to work on Capitol Hill.

“He’d like to see progress by May,” she said, “and certainly a package through by the summer.”

Privately, some administration officials stress the difficulty of passing any of Mr. Biden’s agenda items without using reconciliation. To clear a Senate filibuster, any compromise would need to attract at least 10 Republican votes. A group of that size entered negotiations with Mr. Biden over his economic aid package, which Mr. Biden proposed to be $1.9 trillion. The Republicans countered with a proposal of $600 billion, which Democrats quickly dismissed as insufficient.

Mr. Biden instead went ahead with his own plan, steering around Republican opposition to win passage of a $1.9 trillion bill through reconciliation.