The Tory frontrunner wants rental payments included in assessments for mortgages if she becomes Prime Minister. She also plans to shred red tape holding back housebuilding, and give local communities more say on developments.

Ms Truss said: “People are getting older and older before they get their foot on the property ladder. It’s a problem not just for the Conservative party, but for the future of the country.

“As Prime Minister I would break down barriers and unlock the opportunity of home ownership for millions of hard-working renters across the nation.

“I will also rip up red tape that’s holding back housebuilding and give more power to local communities.

“As a former councillor, I remember those painful hours sitting through planning committees.

“I’ll put power back in local councillors’ hands who know far better than Whitehall what their communities want.”

According to the Government, more than half of today’s renters could afford the monthly cost of a mortgage. But various constraints mean only six per cent could immediately access a typical first-time buyer mortgage. 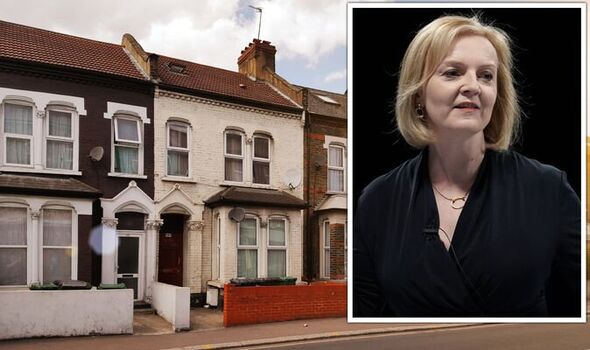 The Truss campaign said this is because the majority of lenders do not currently take someone’s ability to pay a certain amount of rent as proof that they can afford to pay a higher mortgage, pricing them out of buying a home.

Through an upcoming Government review of the market, Ms Truss would allow rent payments to be used as part of the affordability assessment for a mortgage.

Polling conducted by YouGov in February shows that about three-quarters of Britons (76 per cent) think that banks and other mortgage lenders should accept a history of regular rent payments as proof of affordability when it comes to applying for a mortgage.

Foreign Secretary Ms Truss has also pledged to rip up the red tape that is holding back house building by scrapping Whitehall-imposed housing targets.

A spokesman for her campaign said: “Truss’s Government will work with local communities to identify sites ripe for redevelopment and reduce planning restrictions, turbocharging commercial and residential development.”

The plans form part of Ms Truss’s wider programme to alleviate the nationwide housing crisis and level up the country.

It follows her landmark policy to create new model towns and industry hubs, in the spirit of Bournville, on the south-west side of Birmingham, and Saltaire, the Victorian model village in Shipley, West Yorks.

The new towns would bring business, opportunity and housing together under low tax, low regulation and low planning “investment zones”.

“To abolish these, as Liz Truss proposes, would be a radical, vote-winning reform to take us into next year’s local elections – and then the General Election after that.”

Ms Truss heads into the weekend as the bookmakers’ favourite to win the race to replace Boris Johnson as Tory leader and Prime Minister. Momentum is gathering behind the Foreign Secretary with a number of polls putting her as the clear frontrunner ahead of former chancellor Rishi Sunak.

This weekend is seen as the last chance for Mr Sunak to claw back some ground, with many Conservative members expected to cast their vote as soon as the ballot papers arrive next week.

During the leadership campaign, Ms Truss has promised to review inheritance tax, after the taxman took in a record sum from grieving families.

She said: “Our tax system isn’t working. It’s too complicated. I would have a complete review of the tax system.”

This is in part because of a rise in property prices, but also because of the Government’s decision to freeze the tax threshold since 2010, meaning more people have hit the cusp as inflation has soared.

Figures released this week showed the Government raked in £6.1billion in 2021-22 – the highest figure on record and a 14 per cent increase on last year.

Ms Truss spent yesterday campaigning in Suffolk and Norfolk, where she defended her plans to cut taxes. The leadership hopeful also spoke at Breckland Council, in Dereham, Norfolk, as part of her campaign run.

She said: “Carrying on, on the same economic path, is currently forecast to lead us to recession.

“The tax cuts I’m proposing are all about increasing the supply in the economy.”

She added: “The way to get growth is to do the reforms we need in our economy, to unleash those post-Brexit opportunities.

“And I have done a lot of that as International Trade Secretary and as Foreign Secretary.

“But also to help people and businesses keep more of their own money so they can invest in the future.”

Ms Truss also said she was “delighted” to have the backing of Defence Secretary Ben Wallace. Mr Wallace praised her support for defence and security as he endorsed her as his choice for PM.