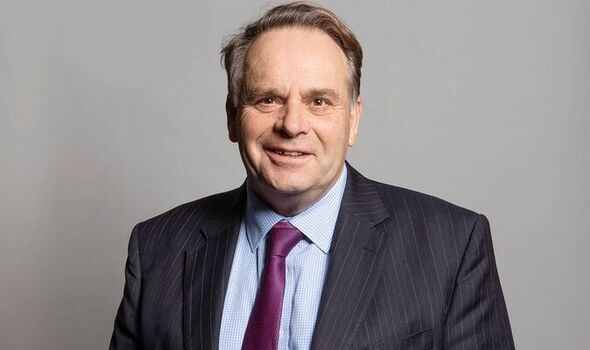 The father-of-two, 65, was identified days after two female colleagues made the claims at a meeting of Conservative MPs.

The father-of-two, 65, was identified days after two female colleagues made the claims at a meeting of Conservative MPs.

He was facing calls to resign yesterday after being stripped of the party whip and referring himself to Parliament’s standards watchdog.

His wife Sue said of the claims: “It was all very embarrassing. My breath was taken away, frankly.” Asked if she was aware of her husband
having done anything similar before, she said: “No. He’s quite a normal guy, really. He’s a lovely person. It’s just so stupid.”

“These ladies were quite right to be as [upset] as they were. I’ve just no idea what happens in these circumstances. I don’t know whether it’s ever happened before.”

She said of pornography: “I don’t understand [the attraction of] it.

“I’m a woman. Hence why the women were so cross. It’s degrading.

“But on the other hand it takes two to tango. There must be women posing for all this.”

Mrs Parish went on: “I think it would be a bit stupid [to let it come between us]. As I say, I’m fairly tough. You’ve got to carry on, haven’t you?”

“Where that leaves [his career]…What’s going to happen? I’ve got no idea. It depends on what [Tory Chief Whip] Chris Heaton-Harris says, I suppose. I don’t think it’s going to carry on, is it?”

A spokesman for Mr Heaton-Harris said: “Having spoken to the Chief Whip this afternoon, Neil Parish MP is reporting himself to the Parliamentary Commissioner for Standards.

“Mr Parish has been suspended from the Conservative Whip pending the outcome of that investigation.”

In a statement, Mr Parish said he would carry on as MP for Tiverton and Honiton in Devon, adding: “I will be co-operating fully with any investigation.”

He later suggested he may have accidentally opened the video.

It is understood the matter has been reported to the Independent Complaints and Grievance Scheme (ICGS), which investigates claims of bullying and sexual harassment.

It was unclear what potential breach of the MPs’ code of conduct Mr Parish will refer to standards commissioner Kathryn Stone. One line of inquiry could be whether he caused “significant damage to the reputation and integrity” of the Commons.

Mr Parish, a farmer who chairs the Commons environment, food and rural affairs committee, is also part of the powerful Liaison Committee that quizzes the premier in depth every few months.

Labour said yesterday that the Government was “rotting from the head down”.

Shadow Commons leader, Thangam Debbonaire, said: “The Conservatives knew for days about the disgusting behaviour of one of their MPs and tried to cover it up.”

Senior Labour MP, Harriet Harman, said Mr Parish “should resign immediately” if the claims against him were true and called it a “new low” for the Commons.

“Nobody should be watching pornography at work.”

There is also outrage at unnamed Tories telling a Sunday newspaper deputy Labour leader Angela Rayner tried to distract the Prime Minister in the Commons with her legs.