Gordon Brown shut down by host for 'war with America' claim

The former Labour Prime Minister told the Sky News presenter that Britain is at war with both Europe and the US over Northern Ireland amid efforts to fix the controversial Brexit Protocol. Mr Brown was asked to clarify how a state of war may exist between London and Washington, with the former Prime Minister stating that America is unwilling to sign a trade treaty with the UK until the Brexit problems in Northern Ireland are resolved.

Mr Brown told Sky News: “If we cannot repair our relations with Europe and America, and we are at war if you like with both of them for different reasons…”

“Why are we at war with America!?,” quizzed Ms Rigby.

“We are at war with America over Ireland,” replied the former Prime Minister.

“Because America will not sign a trade treaty with Britain as long as we can’t sort out the issues related to Ireland.” 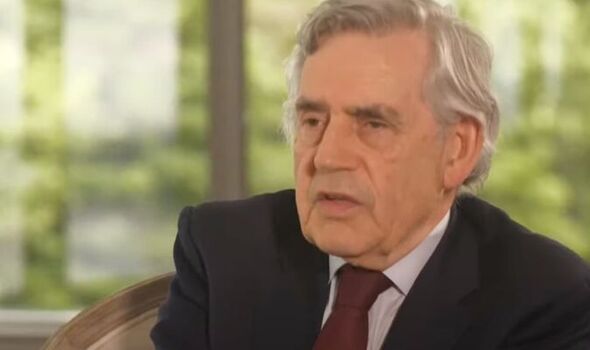 Ms Rigby said: “Actually, President Biden I asked him about this explicitly last year, last September and he did say that he thought the two things were separate.

“That there was a trade deal and then there was the Good Friday Agreement.”

Mr Brown responded: “But he may think that but the American Congress will not think that.

“There is no chance of a trade deal between Britain and America unless we can sort out the problems that arise in Ireland.