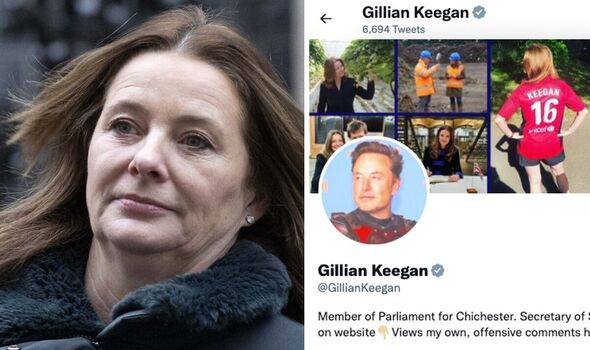 The Education Secretary has been hacked as her Twitter account has made a number of bizarre changes, beginning from around 7.30pm on Christmas Day. The profile photo on the account, formerly an image of Gillian Keegan herself, has been changed to a snap of Elon Musk, the new CEO of Twitter. In addition, the account has been replying to tweets directed at Mr Musk and using the comment section to promote investment in cryptocurrency.

Despite the hacking, the account still holds the grey verified tick on Twitter, a standard of verification reserved for official government representatives and organisations.

The first unusual tweet from Ms Keegan’s account appears to have been sent on the evening of Christmas Day.

The account, still under Ms Keegan’s name despite the profile photo change, wrote: “Thank you for another great year! This feels a lot like Christmas.

Underneath, the account posted a link to a supposed “special giveaway,” directed at the “crypto community”.

One Twitter user replied to a selection of festive animal photos posted from Mr Musk’s account by sharing a Merry Christmas gif in the comment section.

Just below, Ms Keegan’s account wrote: “If you own doge, then you are a dogecoin warrior fighting for the future!”

The message was followed by the same link as seen earlier. Dogecoin is one form of cryptocurrency, initially launched as a joke, with one unit worth approximately 0.063 British pounds.

Read more: Putin and Xi could be targeting ministers

The short bio at the top of the verified account still identifies the user as the MP for Chichester and Education Secretary.

In addition, the banner photo, which is displayed just above and behind the profile photo, has remained a collage of images featuring Ms Keegan, including pictures of her in the House of Commons.

Overnight and into Boxing Day morning, the account continued to encourage followers to “ask Santa for more doge,” and promote the link which appeared to be masquerading as a “live press conference” opportunity with Elon Musk.

The news comes after Mr Musk acquired Twitter in a staggering $44 billion deal, which saw him promise to crack down on spam and bot accounts across the platform.

Don’t miss:
Truss’s phone hacked by Putin’s spies looking for ’embarrassing’ info [REPORT]
Criticisms of Boris Johnson stolen from Liz Truss’s phone [REVEA;]
These passwords can be cracked in one second is yours on the list? [ANALYSIS]

The verified British Army Twitter account had its profile photo changed to a strange image of a cartoon monkey, additionally, the account name and description were altered.

Once control of both accounts was regained, the British Army tweeted: “Apologies for the temporary interruption to our feed. We will conduct a full investigation and learn from this incident.”