Home » Politics » Georgia Was a Big Win for Democrats. Black Women Did the Groundwork.

RIVERDALE, Ga. — Decades before Joseph R. Biden Jr. flipped Georgia for the Democrats, Felicia Davis was a one-stop political organizing dynamo in Clayton County, canvassing for issues rather than candidates, for her community rather than a political party.

The boom of her voice and the clarity of her convictions command respect. In her operation, even the teenagers are paid $15 an hour to knock on doors and distribute literature. Almost everyone is diligent: She is not someone to disappoint.

When Georgia turned blue for Mr. Biden this year after record voter turnout, it validated the political vision and advocacy of a group of Black women who have led a decades-long organizing effort to transform the state’s electorate. Democrats celebrated their work registering new voters, canvassing and engaging in long-term political outreach. The achievement seemed to confirm mantras that have become commonplace in liberal politics, like “trust Black women” and “Black women are the backbone of the Democratic Party.”

But the same women tell a more complicated story about their relationship with elected Democrats, national campaign officials and prominent political groups. For years, they said, their political vision was demeaned and distrusted. Donors and campaigns balked at the idea that Georgia was a battleground state worth investing in and that the organizers had picked up on demographic and political changes in their home state that others had missed.

Now, with Georgia at the center of the political universe ahead of two pivotal Senate runoff elections in January, the organizers are asking Democrats: Will you embrace our approach now?

“We weren’t surprised that Georgia turned blue, because we’ve been working on it for over 15 years,” said Deborah Scott, the founder of Georgia Stand Up. When she started the group in 2004, she said, it was hard to persuade philanthropy groups and political foundations that focus on grass-roots organizing to consider Georgia. 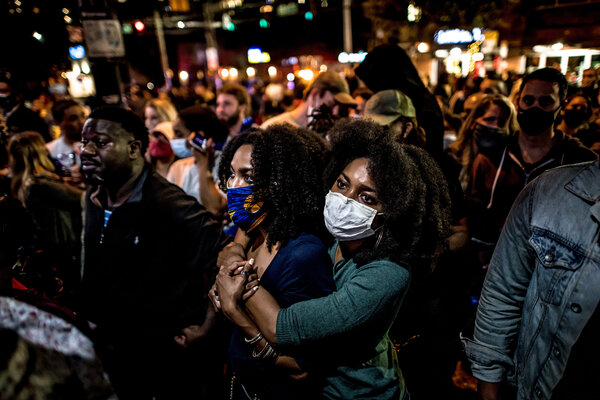 The most famous member of the club is Stacey Abrams, the former state lawmaker and candidate for governor who founded a voter registration group called the New Georgia Project. But there are many others — like Ms. Davis and Helen Butler, who was mentored by the Rev. Joseph E. Lowery, the late civil rights leader — who have spent years working to turn out voters in Georgia.

No single group delivered the state to Mr. Biden or can take credit for turnout there. In a presidential race decided by a razor-thin margin in Georgia, every piece mattered: increased turnout among young voters; outreach to Black, Latino and Asian-American communities; and a rejection of President Trump by some college-educated white voters who typically vote Republican.

In the organizers’ telling, the story of how Georgia voted does not start with Mr. Trump’s election in 2016 or Mr. Biden’s campaign investment this year. It begins a decade earlier, when a new generation of Black female leaders decided to create their own structures, fed up with a state party dominated by conservative “Dixiecrats” and a moderate establishment that presumed the electorate could not change.

They would identify, engage and turn out communities that had been traditionally overlooked — just as they had been themselves. It was a slow build that included close losses in the 2016 presidential election, the 2017 House special election in Georgia and Ms. Abrams’s run in 2018.

Ms. Butler, the executive director of the Georgia Coalition for the People’s Agenda, said her group’s political work showed how “Black women take care of the entire community, not just themselves.”

Nse Ufot, who leads the New Georgia Project, said the same national leaders now praising voter registration efforts in Georgia should reflect on how long it had taken them and groups like the Democratic National Committee and the Democratic Congressional Campaign Committee to invest in the Black women leading the push.

“National campaign committees and presidential campaigns, like the D.N.C. and the D.C.C.C., would have their favorite pastor or their favorite community activists just run programs,” she said. “No accountability. No data.”

Ms. Ufot added: “It was just their favorite pastor dude saying, ‘Turn your people out.’ When people like Helen Butler could actually run a proper program.”

“Foundations were not supporting social justice and community building work here,” she said. “No one was looking at what’s happening in our rural areas, and no one’s looking at the small ways that people were being cheated out of their own democracy by having these voter suppression laws. People weren’t even paying attention, because they thought that’s just the way it was here.”

The arc of Georgia’s transformation has become a road map for other states that are experiencing rapid demographic change and a catalyst for a new strategy in liberal politics. Versions of the New Georgia Project have popped up in Virginia, Texas and North Carolina as organizers try to create new, consistent voting blocs.

This year, the progressive donor Susan Sandler gave $200 million to fund such efforts in the South and Southwest. An accompanying note said she had become convinced that investing in these groups — and not in campaigns — was the path to building long-term power among minority communities.

Democratic groups and candidates have changed as well, with organizations like the D.C.C.C. garnering praise from Georgia Democrats this cycle for investing earlier in the state. Black Democrats running statewide campaigns in the South have reflected the message of Ms. Abrams, who embraced the racial and gender diversity of the party’s base.

“Georgia doesn’t turn blue without the determined organizing of activists and leaders in communities of color, particularly the Black community,” said Robyn Patterson, the national press secretary for the D.C.C.C. “House Democrats flipped two Trump-lean districts by investing early, hiring talented organizers with deep ties to their communities, and engaging the people of color who have spent years working to move Georgia forward.”

The fact that the winning presidential ticket included a Black woman was another sign that the Democratic Party had come to recognize the most consistent part of its voting and organizing base, said Melanie Campbell, who convenes a group called the Black Women’s Roundtable and is president of the National Coalition on Black Civic Participation.

Vice President-elect Kamala Harris’s nomination “was that moment — for so many sisters — it was about more than just a ticket,” Ms. Campbell said. “It was about having arrived to a place of being fully seen and fully respected as Black women.”

In a recent phone interview, Ms. Abrams, who is expected to run again for governor, recalled how she had driven to 150 of Georgia’s 159 counties before her 2018 bid, learning about places where local leaders said the party could be more viable.

“But when I got into those places, there was always someone there to meet me — who had been waiting for someone to come to help connect and help them build this network,” she said. “So whether it was finding Black voters in South Georgia, and working with Black immigrants in Gwinnett, or working with the A.A.P.I. community, or going to North Georgia and meeting with more and more Latino voters.”

Ms. Abrams also said she disliked “trust Black women” as a motto because it didn’t reflect the diverse coalition that had brought change to the state.

A New York Times analysis of Georgia voters found that turnout had increased among minority communities and in the diverse suburbs but that the biggest shift to Democrats was among white college graduates and wealthier residents.

“I appreciate the necessity of that battle cry,” Ms. Abrams said. “And in my approach, in Georgia in particular, Black women have been instrumental. But I chafe at this idea that we then objectify one group as both savior and as responsible party.”

Still, it was Black women who laid the organizing framework in Georgia, and who are doing so again ahead of the Senate runoffs. Ms. Ufot’s group held a small celebration on the Saturday after Election Day, after Mr. Biden crossed the threshold of 270 electoral votes, but was back to organizing by that Monday.

In Clayton County, south of Atlanta, Ms. Davis’s small army of canvassers is encouraging residents to participate in the runoffs but is also focusing on a down-ballot race for the state’s public service commission.

Many voter registration efforts in Georgia are run by nonprofit, apolitical organizations, including the People’s Agenda, Georgia Stand Up and the New Georgia Project, that target historically disadvantaged communities and nonwhite voters.

Because those demographic groups tend to break for Democrats, and given that leaders like Ms. Butler and Ms. Ufot have professional and personal histories with people like Ms. Abrams, Republicans have sometimes cast the groups as unofficial wings of the Democratic Party — which has placed them under intense legal and journalistic scrutiny.

The women who lead these groups say they take pride in their legal and operational independence and denounce the transactional nature of political campaigns and candidates. Their message, they say, is about turning passive constituents of a democratic society into active participants. It is an enduring effort that begins before the flood of candidate ads and party literature and continues long after.

Ms. Butler, the head of the People’s Agenda, said what had given her the most pride this year was not the Democratic success in Georgia, but the high turnout and continued ascendance of nonwhite voters.

“The more people that get engaged in this, the more diverse opinions we have, I think we come out with better elected officials,” she said.

But those who are explicit about their partisan leanings said a blue Georgia was vindication after years of what-ifs and close calls.

The next time they ask for investment and trust, it will be easier, they said. And for Black women everywhere, there is now a model for expanding their political power.

“We are the home of Scarlett O’Hara and ‘Gone With the Wind,’” Ms. Davis said, referring to the 1936 plantation epic that was set in Clayton County. “So you have to think about it like that. What we’re doing here is putting to rest some of the worst aspects of old Southern culture. And that’s a powerful thing.”