The Foreign Secretary told Tory members at leadership hustings in Norwich last week that she was undecided as to whether the French leader was “friend or foe”. A number of issues have affected the UK and France in recent months, including boat crossings in the Channel and travel chaos around Dover, which Ms Truss blamed on a lack of staffing by the French authorities.

Both the Foreign Secretary and her rival candidate Rishi Sunak were asked a series of quickfire questions at the Norwich hustings.

“The jury’s out,” she responded to loud applause.

“But if I become Prime Minister, I would judge him on deeds, not words.”

In an exclusive poll for Express.co.uk by Techne UK, a majority of British voters surveyed said they backed Ms Truss’s reservations about the French President. 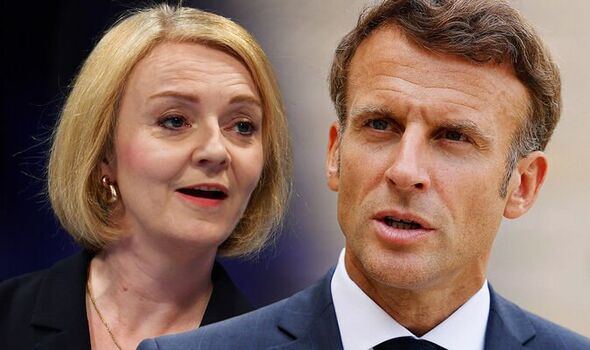 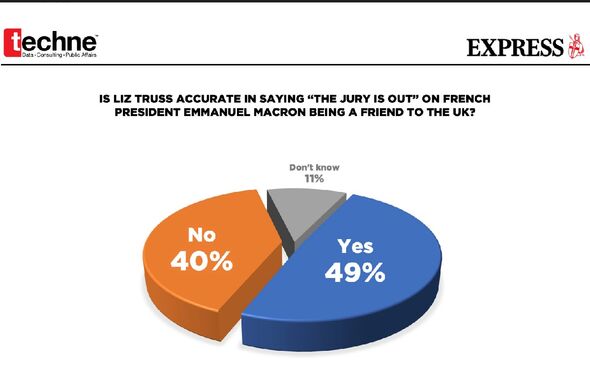 Asked “Is Liz Truss accurate in saying ‘the jury is out’ on French President Emmanuel Macron being a friend to the UK?”, 49 percent of the 1620 surveyed On September 2 said yes.

In a blow to the staunch pro-European French leader, even 51 percent of the Remainers among those surveyed backed Ms Truss, against 53 percent of Leavers.

Among the youngest of those surveyed aged 18-34, 46 percent said they supported Ms Truss’s comments against 41 percent who did not.

Responding to the comments, President Macron said Britain is an ally of France and its people will always be friends despite the occasional “error” made by UK leaders.

He said: “Listen. It’s never good to lose your bearings in life.

“Regardless of the person who becomes the leader in Britain, the UK is friends with France.

“We live in a complicated world. You have more and more authoritarian democracies, unbalanced powers.

“If we are not able to say between the French and the British whether we are friends or enemies, and that term isn’t ours, then we are in trouble.

“The British people, the British nation… the United Kingdom is a friendly, strong and allied nation, regardless of its leaders, sometimes in spite of its leaders or the small mistakes they may make in the way they speak.”

Elsewhere in the hustings, Ms Truss conceded that if it were a choice between relying on France or China for nuclear expertise, she would pick France.

Taking questions in front of an audience of Tory members, she said: “I’m very clear that we need to boost our nuclear industry including Sizewell, including the small modular reactors that are produced in Derbyshire.

“Frankly, I would rather that we do have more homegrown nuclear expertise, and regrettably we lost that because we failed to do these things 20 years ago, or 30 years ago.

“If it’s a choice between relying on France and relying on China, I would take France.”

It comes after Ms Truss distanced the UK from the prospect of a project of being part of a wider European political community following a meeting between Boris Johnson and the French president in June.

The Elysee Palace insisted that the Prime Minister had expressed interest in the idea, which would see non-EU states such as the UK involved.

Ms Truss denied the UK had ever been on board with such a proposal, saying afterwards: “That is not true.

“I don’t know the exact words that President Macron has used, but we have not agreed to that.”

Asked whether she bought into “his political and economic community”, she replied: “No.”