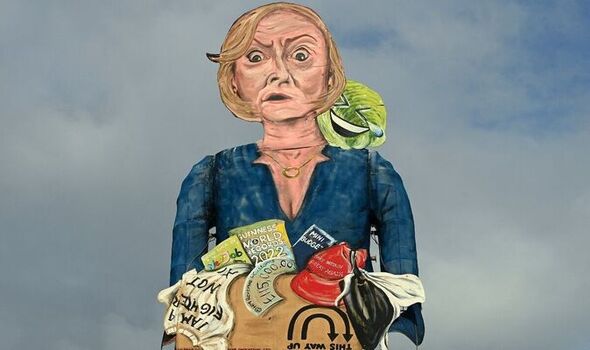 An effigy of Liz Truss featuring a lettuce has been unveiled by the Edenbridge Bonfire Society. The 11-metre-high figure of the former PM will be lit for Bonfire Night on Saturday.

The Edinburgh Bonfire Society has become famous over the years for its effigies of public figures.

Also in the cardboard box is a copy of her mini-budget, a Make Britain Great Again red cap, a t-shirt with the slogan “I am a fighter, not a quitter”, and a cheque for £115,000 which is the perpetual funding provided to ex-PMs.

The box has the words “This Way Up” the wrong way round.

It also has the words “Oh Dear Oh Dear Oh Dear Packaging Ltd” following King Charles’s comment to Ms Truss when she met him for an audience towards the end of her short-lived premiership.

She has a lettuce on her shoulder which is crying with laughter in reference to a livestream by the Daily Star which suggested the vegetable would last longer than Ms Truss in office.

Larry the Downing Street cat is at her feet.

It comes as the Edenbridge Bonfire in Kent is returning for the first time since 2019.

The event sees hundreds of people take part in a torchlight parade through Edenbridge High Street.

The society said: “As our tradition dictates, this is led by our bishop of the bonfire, his choirboys and the society’s effigies: Guy Fawkes, General Wolfe and Anne Boleyn, with her head tucked underneath her arm.”

People head to the local recreation ground where two effigies – Guy Fawkes and the “Celebrity Guy” – are set alight.

The society is a not-for-profit organisation which has has been in existence for more than 90 years and aims to raise more than £5,000 for local charities with Saturday’s event.

When the event was last held in 2019, an effigy of former Commons speaker Mr Bercow holding the heads of Mr Johnson and Jeremy Corbyn was burned.