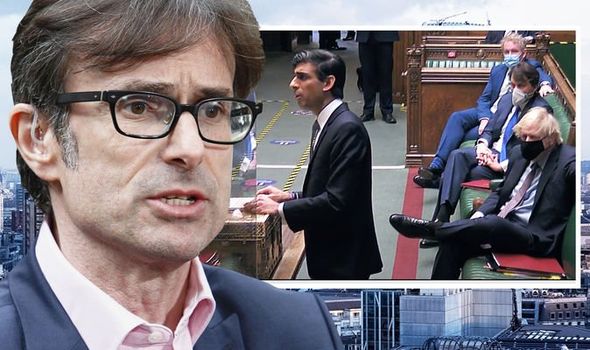 The Chancellor used his Budget to set out a £65 billion spending package this year and next year to support the economy as it recovers from the pandemic. But he warned that the unprecedented spending could not continue and he had to be “honest” about putting the nation’s finances back on a sustainable footing. Mr Sunak said the Government will not raise the rates of income tax, national insurance, or VAT.

However, ITV host Robert Peston tweeted: “Pretty much all tax thresholds – for income tax, inheritance tax, pensions allowance, CGT, VAT and so on – will be frozen from next year to 2026.

“These are disguised tax rises for pretty much all of us, though hit higher earners most.”

Mr Sunak said he was maintaining at their current levels the inheritance tax threshold, the pensions lifetime allowance and the annual exempt amount in capital gains tax until April 2026 and, for two years from April 2022, the VAT registration threshold.

He said of his principles: “First, while it is right to help people and businesses through an acute crisis like this one, in normal times the state should not be borrowing to pay for everyday public spending.

“Second, over the medium-term, we cannot allow our debt to keep rising, and, given how high our debt now is, we need to pay close attention to its affordability.

“Third, it is sensible to take advantage of low interest rates to invest in capital projects that can drive our future growth.”

It comes as Mr Sunak told MPs he UK’s recovery from the economic damage caused by coronavirus will be “swifter and more sustained” than previously thought.

But he warned it would take “a long time” to rebuild and pledged to do “whatever it takes” to support people.

The Office for Budget Responsibility (OBR) expects the economy to return to its pre-Covid level by the middle of next year – six months earlier than they previously thought – but Mr Sunak acknowledged that “coronavirus has done and is still doing profound damage”.

He told MPs that despite the £280 billion of support already committed to protecting the economy the damage done by the virus has been “acute”.

“Our economy has shrunk by 10 percent – the largest fall in over 300 years. Our borrowing is the highest it has been outside of wartime.

“It’s going to take this country – and the whole world – a long time to recover from this extraordinary economic situation. But we will recover.”

The Chancellor said the OBR expects the economy will be 3 percent smaller than it would have been in five years’ time because of the coronavirus crisis, but that the economy is forecast to grow this year by 4 percent, by 7.3 percent in 2022, then 1.7 percent, 1.6 percent and 1.7 percent in the last three years of the forecast.