WASHINGTON — Donald J. Trump’s lawyers laid out their first extended impeachment defense on Monday, arguing that holding him responsible for the deadly Jan. 6 Capitol attack was nothing more than “political theater” by Democrats, and that the Senate had no power to sit in judgment of a former president.

In a 78-page brief submitted to the Senate on the eve of the trial, the lawyers asserted that Mr. Trump did not “direct anyone to commit unlawful actions” or deserve blame for the conduct of what they called a “small group of criminals” who stormed into the Capitol. They said the former president’s rash of falsehoods about a stolen election, delivered at a rally outside the White House before the pro-Trump mob mounted its assault, were protected by the First Amendment.

Relying on contested legal arguments, they also contended that the Senate “lacks jurisdiction” to try a former president because, by definition, he cannot be removed.

Only hours later, in their own filing, the Democratic impeachment managers from the House called the lawyers’ attempt to dismiss their charge “wholly without merit,” and argued that the Constitution gave them clear jurisdiction to proceed.

Mr. Trump’s defense appeared to be aimed at persuading at least 34 Republicans needed to win acquittal on the charge of “incitement of insurrection” to stick with the former president, despite their outrage over an assault that put their lives at risk. And it brimmed with partisan attacks.

“This impeachment proceeding was never about seeking justice,” wrote the lawyers, Bruce L. Castor Jr., David I. Schoen and Michael T. van der Veen. “Instead, this was only ever a selfish attempt by Democratic leadership in the House to prey upon the feelings of horror and confusion that fell upon all Americans across the entire political spectrum upon seeing the destruction at the Capitol on Jan. 6 by a few hundred people.” 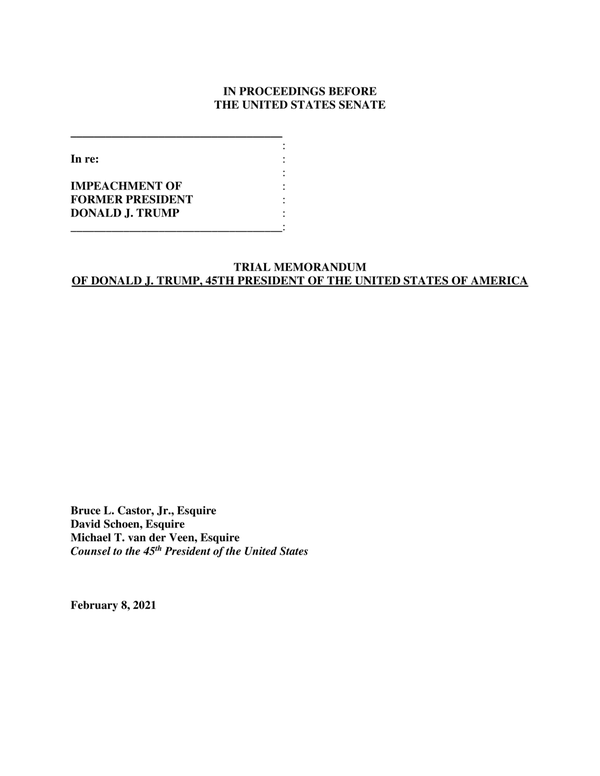 In a 78-page brief submitted to the Senate, former President Donald J. Trump’s lawyers put forward their first sustained legal defense since Mr. Trump was impeached by the House for the second time.

The House managers framed it instead as an effort to hold Mr. Trump accountable for egregious actions and to disqualify him from holding office in the future.

“As charged in the article of impeachment, President Trump violated his oath of office and betrayed the American people,” the managers wrote. “His incitement of insurrection against the United States government — which disrupted the peaceful transfer of power — is the most grievous constitutional crime ever committed by a president.”

The flurry of written arguments arrived as the rules and timeline for the trial came into sharper focus on Monday and as Washington braced for the second impeachment trial of Mr. Trump in two years. Top Senate leaders reached a bipartisan agreement to set up an exceptionally swift proceeding that could conclude in less than half of the time of Mr. Trump’s first trial.

What You Need to Know