WASHINGTON (AP) — The Democrats who prosecuted Donald Trump’s impeachment trial faced puzzlement and criticism from senators on Saturday as they surprised most everyone — Trump’s lawyers and Senate Democrats included — with an attempt to call witnesses, only to abandon it as lawmakers balked at the possibility of an extended trial.

The House impeachment managers opened the final day of the trial by announcing they would seek to depose Rep. Jaime Herrera Beutler, R-Wash., who had shared her account of a call between Trump and House Minority Leader Kevin McCarthy as rioters stormed the U.S. Capitol on Jan. 6. The House Democrats charged that Trump incited the violent insurrection, which left five dead, and the former president appeared to side with the rioters on the call.

Senators in both parties reacted with shock and frustration to the gambit, with many arguing that witnesses wouldn’t change any votes and could extend the trial for weeks. Still, 55 senators voted to allow the testimony, with Senate Democrats saying they would support whatever the impeachment managers thought would be best. 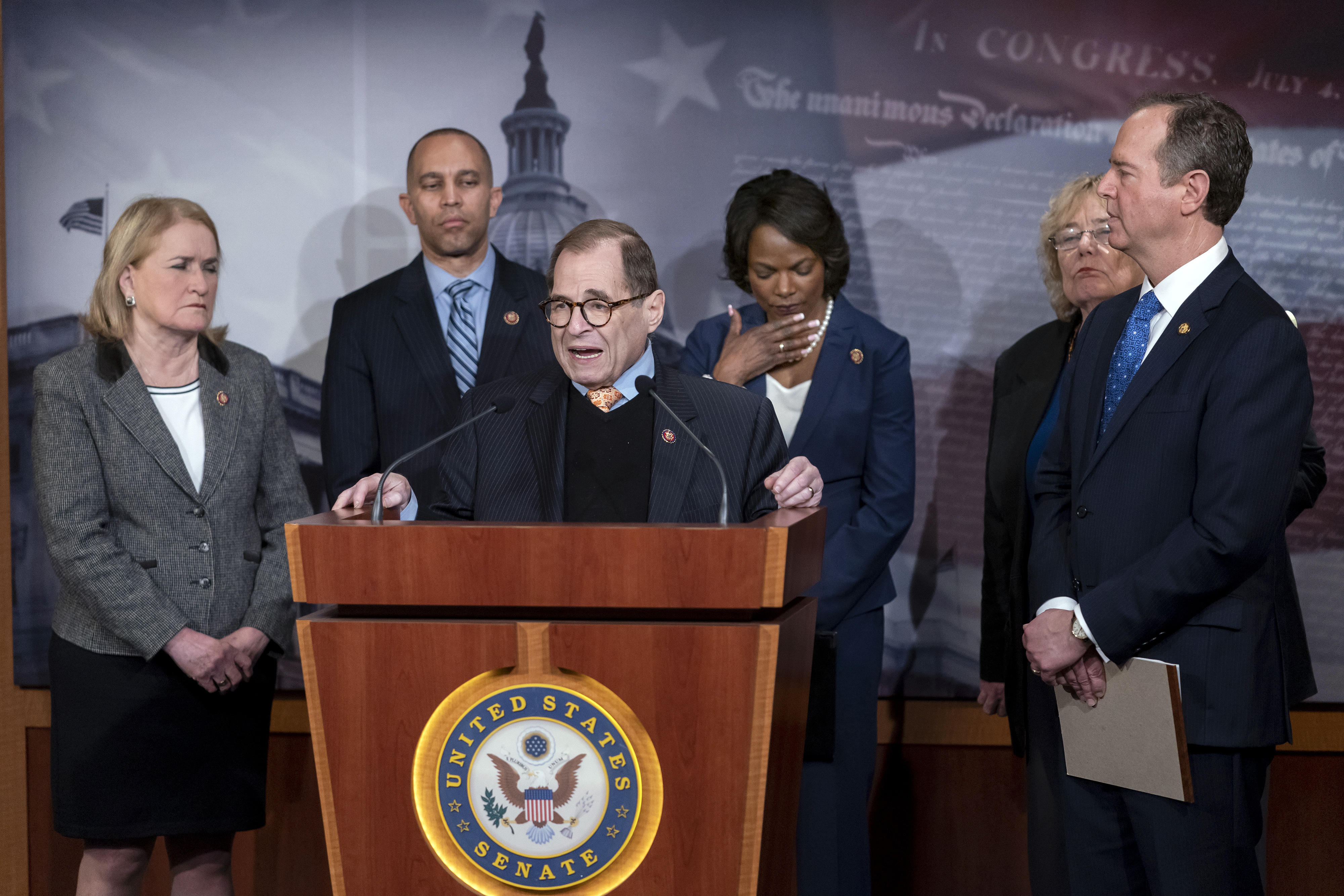 But Trump’s lawyers quickly threatened to seek votes on at least 100 witnesses on their own side, making clear the process would be both protracted and partisan. The standoff lasted more than two hours, with frustrated senators milling about on the Senate floor and questioning what they had even just voted to do.

After negotiations, Democrats agreed to read Herrera Beutler’s statement into the record and forego witnesses completely — moving the Senate to a final vote. A few hours later, the Senate voted to acquit Trump, 57-43, the majority falling short of the two-thirds needed for conviction.

The momentary chaos, and the House Democrats’ eventual retreat on witnesses, was emblematic of the prosecutors’ challenge throughout the trial. Most minds were made up before it even began, and the facts of the case were unlikely to sway Republicans who were defending Trump’s actions. Still, the Democrats faced pressure from within their own party to present the fullest case possible for “incitement of insurrection,” with at least one Senate Democrat tweeting on Friday night that they should call witnesses.

“What did Trump know, and when did he know it?” tweeted Rhode Island Sen. Sheldon Whitehouse, encouraging Democrats to “suspend” the trial and seek answers to questions that had come up.

But once the managers did say they wanted to call testimony — and once the Senate endorsed the move — the realization set in among all parties that calling witnesses would prolong the trial for weeks, open up the Republican defense to try to call dozens of their own and put off lawmakers’ work on COVID-19 relief and other legislation that is a priority for President Joe Biden. And, most importantly, Democrats were unlikely to win the two-thirds of the Senate they needed to convict under any scenario.

Senators endorsed the eventual deal. “The House managers proved their case,” said Sen. Mazie Hirono, D-Hawaii. “And when lawyers prove their case, you sit down.” Sen. Raphael Warnock, D-Ga., said he didn’t think “anything would have made a difference with the folks on the other side.”

Still, there was frustration behind the scenes, and even among the House Democrats, about what they should do. After a late night of discussions about how to address Herrera Beutler’s claims, and an early morning meeting, the impeachment managers informed Senate Democrats five minutes before the trial began that they had decided to call witnesses, according to a person familiar with the discussions. After the vote, “it was clear the managers had no plan,” said the person, who was granted anonymity to discuss the private negotiations.

White House officials, meanwhile, watched the drama over witnesses unfold but did not get involved in the decision-making, according to a senior administration official not authorized to publicly discuss private conversations. Biden was spending the weekend at Camp David.

Democrats wanted to use the claims of Herrera Beutler, who had told the story before but issued a new statement Friday evening, that Trump defended the rioters in a call to McCarthy as they were breaking into the building on Jan. 6. There was also confusion over a call Trump made to senators as Vice President Mike Pence was being evacuated from the Senate, and the House managers agreed to enter a log of the phone call into the formal trial record. The call log made clear that Trump sent a tweet attacking Pence two minutes before being told by a senator that Pence was being evacuated.

Maryland Rep. Jamie Raskin, the lead impeachment manager for the House, vented frustration over the back and forth on witnesses at a news conference after Trump’s acquittal.

“I made the call,” Raskin said, throwing up his hands. “If you want to blame somebody.”

He said if they had needed witnesses to prove their case, “then we would have gone all the way,” he said. But “we overwhelmingly proved our case.”

Several senators agreed — three of the seven Senate Republicans who voted to convict Trump had voted not to call witnesses. One of those Republicans, Pennsylvania Sen. Pat Toomey, said after the vote that he didn’t think witnesses would “provide information that would determine my final vote.”

“The House managers did a masterful job,” he said after the final vote. “They presented a complete and vivid case that spanned Donald Trump’s cultivation of his stolen election lie, the incitement of his mob, and the deadly harm his mob perpetrated.”