(Reuters) – Brian Kolfage lost both legs and his right hand in a 2004 rocket attack in Iraq. He earned a Purple Heart and became known as one of the most severely injured U.S. service members to survive the war. 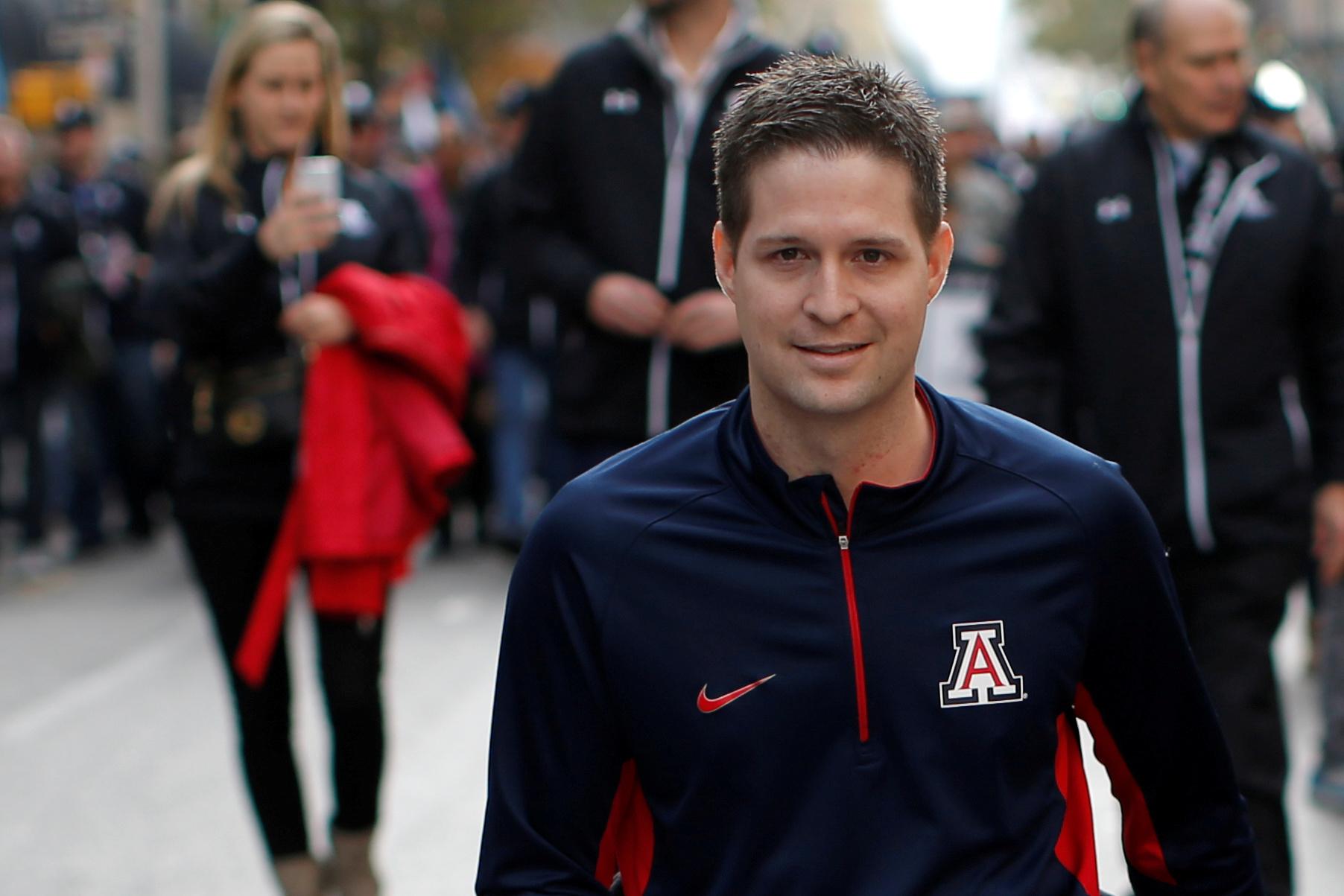 It was this reputation as a war hero – showcased particularly in conservative media – that helped him raise $27 million for President Donald Trump’s promised “wall” on the U.S. southern border, a centerpiece of Trump’s 2016 presidential campaign.

Now Kolfage is one of four defendants, including former presidential adviser Steve Bannon, named in a federal indictment alleging the group secretly diverted hundreds of thousands of dollars for their personal use. The indictment was unveiled in New York Thursday.

Last year, Kolfage told Reuters that his wall initiative stemmed from a desire to bolster American security amid an onslaught of immigrants from Mexico. “As citizens of our country, it’s our duty to do what’s right,” the former airman said.

At the time, Kolfage, 38, said his team had coordinated closely with the White House. Trump associate Kris Kobach – a former Kansas Secretary of State and attorney for Kolfage’s organization – briefed the president regularly on the effort, Kolfage said.

Kolfage made a seemingly patriotic promise not to “take a penny” from the wall venture. But U.S. attorneys from the Southern District of New York said in their indictment that the pledge was actually cover for a fraud and money laundering scheme that appealed to credulous donors with a story of Kolfage’s “sainthood.”

“Some of those donors wrote directly to Kolfage that they did not have a lot of money and were skeptical of online fundraising, but they were giving what they could because they trusted Kolfage would keep his word,” the indictment says.

Kolfage and Kobach did not respond to calls or messages seeking comment. Kolfage’s lawyer also declined to comment, saying he was still gathering information about the charges.

Upon leaving court in Manhattan on Thursday where he pleaded not guilty to the charges, Bannon told reporters the indictment was a “fiasco” meant to thwart efforts to build a wall. Reuters was unable to reach him separately. The other two partners, Andrew Badolato and Timothy Shea, were released on bond. They did not return calls and emails seeking comment. A public defender in Florida who represented Badolato at the hearing declined to comment.

Trump told reporters Thursday that from what he had read about the wall venture, he “didn’t like it” and sought to distance himself from those charged. A White House spokesperson told Reuters Thursday that it had nothing to add to the president’s comments.

Americans all over the country poured money into the wall project, including Benton Stevens, an 8-year-old Texas boy who set up a hot chocolate stand and website to raise funds in early 2019. Stevens donated approximately $28,000 to Kolfage’s effort, according to his parents, and he helped cut the ribbon on Kolfage’s first completed wall project.

Jennifer Stevens, Benton’s mother, said in an interview with Reuters on Thursday that Kolfage’s enterprise had seemed “pretty legit,” and it would surprise her if the charges against Kolfage were true.

“Of course, Benton doesn’t know any of this and we probably won’t let him know about the latest news, because I don’t want him to think his efforts were – you know, he’s 8,” she added.

The wall venture was not the first – or the last – instance in which Kolfage used his military record as a marketing tool and encountered controversy.

He became steeped in right-wing politics after his return from Iraq and helped launch conservative news sites. His social media posts – including false claims that President Obama’s birth certificate was fake – led Facebook in 2018 to ban him for breaking its rules against “coordinated inauthentic behavior,” a Facebook spokeswoman told Reuters in 2019.

In an appearance on Fox News opinion host Laura Ingraham’s show, Kolfage complained that he was being treated unfairly by Facebook. “I sacrificed three limbs for everybody, for your freedom, for your families’ freedom,” he said. He also promoted a GoFundMe campaign that raised $600,000 for Brett Kavanaugh during his contentious Supreme Court nomination.

Judicial ethics guidelines prohibit justices from accepting such donations, and in the end the money was not sent to Kavanaugh. The group said they would give the money instead to the Roman Catholic Archdiocese of Washington, D.C., and some donors withdrew their pledges.

At the end of 2018, the archdiocese told Quartz it had received just over $320,000. The archdiocese did not return a request for comment on Thursday.

In March, as the COVID-19 pandemic spurred worldwide shortages of protective medical gear, Kolfage told Reuters he had launched a business called America First Medical to find and sell scarce face masks and tests to the U.S. government and hospitals. He said his goal was to prevent price gouging and scams. The prices for the masks he sold were steep, but he said they were lower than other vendors’ and he would receive only modest commissions.

“Our sole mission in this whole thing is supplying American citizens with the equipment they need,” he said, lamenting that the federal government had not responded to his mask offers, including pitches on Instagram.

Kolfage was born in Detroit and grew up in Hawaii, according to his website. In Iraq, he was nearly killed in the rocket attack on Sept. 11, 2004. He ultimately moved to Arizona and married Ashley Kolfage, who describes herself on Instagram as a model.

Initially, Kolfage was celebrated by members of both parties. In 2012, he attended President Obama’s State of the Union address as the guest of then-U.S. Representative Gabrielle Giffords, a Democrat.

He told Reuters in the 2019 interview that he had earned “seven figures” by creating popular conservative websites such as Freedom Daily, profiting from advertising revenue, and then selling them. Reuters was unable to verify Kolfage’s claim about his earnings.

In December 2018, Kolfage launched a fundraising campaign on the GoFundMe platform called “We the People Build the Wall,” promising to turn over all money to the federal government. The appeal immediately attracted a flood of donations, aided by attention from Fox News and other media.

Facebook removed several pages about the campaign for violating the social media company’s misrepresentation policies, according to a Facebook spokeswoman in 2019.

Asked about the removals in the June 2019 interview with Reuters, Kolfage said he wasn’t involved in Facebook posts. “I don’t touch the Facebook stuff, that’s our social media” people, Kolfage said.

But according to Thursday’s indictment, Kolfage told Shea, his partner and now co-defendant, that he could justify secret payments to Kolfage as compensation for his work on “social media.”

In January 2019, Kolfage announced his team would not donate the funds to the government but would instead use the money to hire private contractors to build it. He rebranded the effort as “We Build the Wall” and started a nonprofit organization with that name. GoFundMe donors were given the option to get refunds or transfer the funds to the new group.

In the new campaign, Kolfage, Bannon and other participants doubled down on promises that they weren’t keeping any of the money. In January 2019, Kolfage wrote on Twitter: “I made a promise I would NEVER take a penny….100% means 100% right?”

In another Twitter post, he asked donors to the wall to buy from his “Military Grade Coffee” business to help him pay his bills.

In March, Kolfage told Reuters he had begun accepting $10,000 a month in salary from the wall organization, saying the amount was modest compared to salaries paid by other nonprofits of that size.

Actually, according to the indictment, he had received a one-time payment of $100,000 as early as February 2019, plus $20,000 a month routed through a Bannon nonprofit and corporations that were supposedly working on the wall project.

Kolfage spent the money on items including home renovations, cosmetic surgery, jewelry, a 2018 Land Rover and payments on a fishing boat called “Warfighter,” the indictment alleged.

GoFundMe said Friday that it had banned Kolfage from the site given the fraud indictment.

Some donors to “We Build the Wall” are withholding judgment on the charges against Kolfage.

Ray Nurnberger, a lumber yard manager from Long Island, New York, told Reuters on Thursday that they are “quite disappointing” if true. But Nurnberger said he wouldn’t be surprised if they were false, since the Manhattan U.S. attorney’s office “has it in for anything or anyone to do with President Trump.”

Ultimately, Kolfage’s group paid to build two sections of wall, one about a mile and the other 3.5 miles. The project drew praise from Donald Trump Jr., the president’s son, who credited him for “showing really what capitalism is all about” at a July 2019 immigration symposium at the southern border, according to a video posted on We Build the Wall’s website.

Amanda Miller, a spokeswoman for Donald Trump Jr., said in a statement that he had no involvement with the group besides that event.

“If he and others were deceived, the group deserves to be held accountable for their actions,” she said.