For holidaymakers, the massive split on post-holiday quarantine between the UK government and those of Scotland and Wales brings confusion, frustration and annoyance.

Welsh holidaymakers returning to Cardiff Airport from the Greek islands and now facing a two-week quarantine will be furious that fellow tourists flying into Bristol, just 40 miles away, can go straight back to work.

That’s after the governments in Westminster, Cardiff and then Edinburgh within the space of two hours announced three sets of conflicting quarantine rules.

A week of confusion and U-turns has led to demands for airport coronavirus testing intensifying, with Heathrow’s boss John Holland-Kaye denouncing the chaos as “quarantine roulette”.

Given the rising number of coronavirus cases in Greece and Portugal, it had been expected that Transport Secretary Grant Shapps – who himself had to quarantine after an interrupted Spanish break – would put them back on the so-called “red list”. 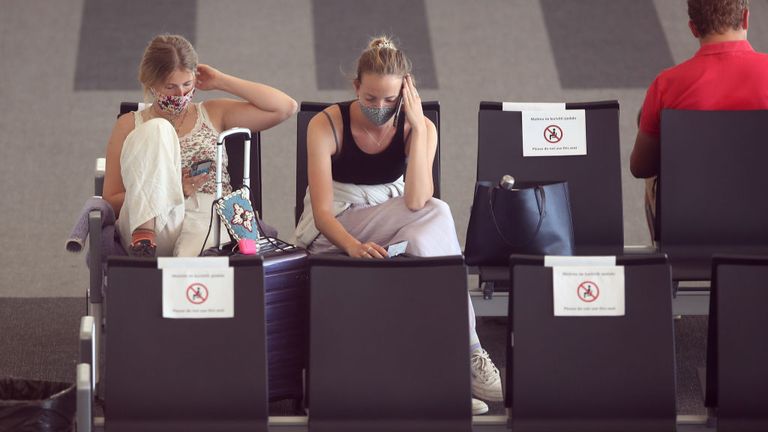 In what would have been another government U-turn, ministers were said to be on the brink of putting Portugal back on the list just days after it was removed, when the country’s coronavirus cases hit 22.7 per 100,000 people, breaking Mr Shapps’ quarantine threshold of 20.

But in a surprise move, at 5pm the transport secretary tweeted that there would be no English additions or removals this weekend, though he reminded holidaymakers “14-day quarantine countries can & do change at very short notice”.

But minutes later, Vaughan Gething, the health minister thought to be a rising star in the Welsh government, made a shock announcement that will have caused dismay to many holidaymakers from Wales currently on holiday.

“I have decided to remove mainland Portugal (the Azores and Madeira will remain exempt), Gibraltar, French Polynesia and the Greek islands of Mykonos, Zakynthos, Lesvos, Paros and Antiparos and Crete from the list of exempt countries and territories,” he said, in what critics will see as a draconian move.

That adds up to six sun-kissed Greek islands, including some of the most popular summer holiday destinations for British tourists, as well as Portugal’s hugely popular Algarve, and Gibraltar, the more-British-than-Britain territory popular with ex-forces families who have served there.

But there was worse news for the Welsh from Mr Gething: no time to re-arrange flights before the new rules kick in.

“I will lay the necessary regulations which will come into force at 04:00 on Friday 4 September,” he declared.

Draconian the action may have been, but it was entirely predictable.

The Welsh government had already put Zakynthos on the quarantine list 24 hours earlier, after up to 20 passengers on a flight home to Cardiff tested positive for COVID-19.

But the confusion and chaos deepened when less than two hours after the latest Welsh announcement, Nicola Sturgeon’s Scottish government announced that passengers arriving into Scotland from Portugal or French Polynesia will have to self-isolate for two weeks as of Saturday.

Yes, Saturday, not Friday, 24 hours after the Welsh rules change.

The Scottish Justice Secretary Humza Yousaf, a rising star north of the border, tweeted: “If arriving into Scotland from Portugal or French Polynesia from 4am Sat (5th Sept) you’ll have to self-isolate for 14 days.

“Gibraltar high up our watch list of countries we are monitoring closely. This week’s data shows increase in test positivity & cases per 100k in Portugal.”

Scotland imposed restrictions on travellers from Greece earlier this week, although Mr Shapps and the Westminster government refused to follow suit, in the first signs of cracks in a co-ordinated UK-wide strategy.

Critics will claim the contradictory rules from Whitehall, Cardiff and Edinburgh this week, culminating in the massive split as the weekend approaches, mean the UK’s quarantine strategy is a mess.

The Welsh government, it has emerged, had been pressing the UK government for a meeting for 24 hours.

It was originally due to happen in the morning, was then pushed back to the afternoon and finally the evening.

Waiting for the conclusion of the meeting would not have given Cardiff enough time to get the quarantines into law before 4am on Friday, which is why Mr Gething pulled the trigger ahead of the meeting.

Holidaymakers trapped in the Greek islands or elsewhere and forced to miss two weeks’ work when they return home won’t be interested in the political bickering between the rival governments, however.

They will just wish the politicians could end the confusion, agree a common policy between the four nations of the UK and bring a stop to the quarantine chaos.