Home » Politics » Coronavirus: Pupils to be told to wear face masks in Scottish secondary schools from next week

Secondary school pupils in Scotland will have to wear face coverings when moving through corridors and other communal areas from next week.

Scotland’s Education Secretary John Swinney announced the move on Tuesday after consulting with teachers and councils on the new guidance.

“From 31 August young people over the age of 12 in secondary schools should habitually wear face coverings when they are moving around schools and corridors and in communal areas where it is difficult to deliver the physical distancing,” Mr Swinney told the BBC. 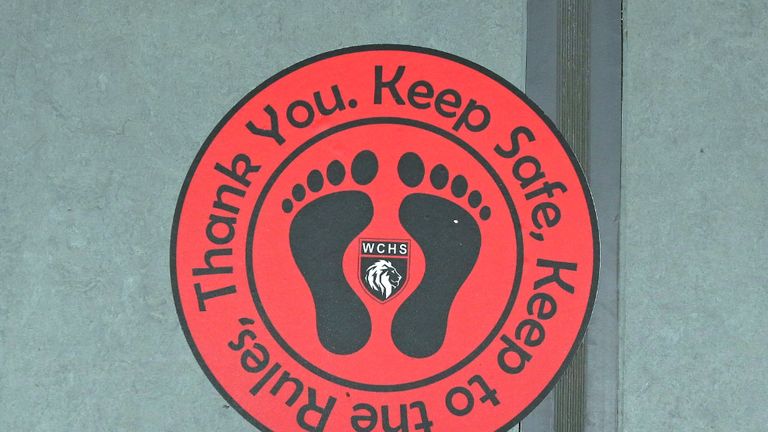 Mr Swinney said the Scottish government was acting on new guidance from the World Health Organisation (WHO), which has said children aged 12 and over should wear masks.

He added that individual exemptions could be granted for health reasons.

Scottish schools have been fully reopened since 11 August following their shutdown during the peak of the coronavirus outbreak in the UK.

Seventeen members of staff and two pupils recently tested positive for COVID-19 at a school in Dundee.

The Scottish government’s move to enforce the wearing of face coverings in secondary schools will put more pressure on the UK government to follow suit in England.

An education union, the Association of School and College Leaders, added to calls for Prime Minister Boris Johnson to keep the issue under review.

But Business Secretary Alok Sharma told Sky News on Tuesday there was “no current plan” to review whether pupils should be told to wear face coverings in English schools.

He told Kay [email protected]: “Public Health England has been very clear that they do not recommend the wearing of face masks in schools.

“And the reason for this is because pupils are obviously mixing in the same cohorts.

“We’ve also provided, through Public Health England, guidance in terms of how schools can keep children safe, how they can keep teachers safe and how schools can be COVID-secure environments.

“So there is no current plan to review that particular advice.”

Downing Street has said the WHO advice on over-12s wearing masks was not specifically about schools.

However, Anne Longfield, the children’s commissioner for England, told Sky News that schools should be able to tell pupils and staff to wear face coverings if they wished to do so.

She said: “Some schools feel they do want to have face masks for staff and for older children because it would give more reassurance to parents and to teachers and the community,” she said.

“I think in that situation, so be it.

“I think there is enough of a mandate already, from my reading of the guidance, to enable schools to do that if needed.”

Former Conservative education secretary Justine Greening also told Sky News the wearing of face coverings in schools “should be considered” as a “sensible measure” to ensure pupils can return to the classroom safely.