Home » Politics » Coronavirus: Local council ‘overruled’ as lockdown restrictions to be lifted against its wishes

The government has been accused of “overruling” a local council by lifting coronavirus restrictions in parts of Greater Manchester.

Andrew Western, the leader of Trafford Council, reacted angrily as he revealed the government would announce later on Friday that COVID-19 restrictions would be eased.

:: Follow live coverage of the latest coronavirus news and updates

On 31 July, local residents in Trafford – along with other parts of Greater Manchester, Lancashire and West Yorkshire – were told to no longer socialise with other households in their own homes, gardens, pubs or restaurants. 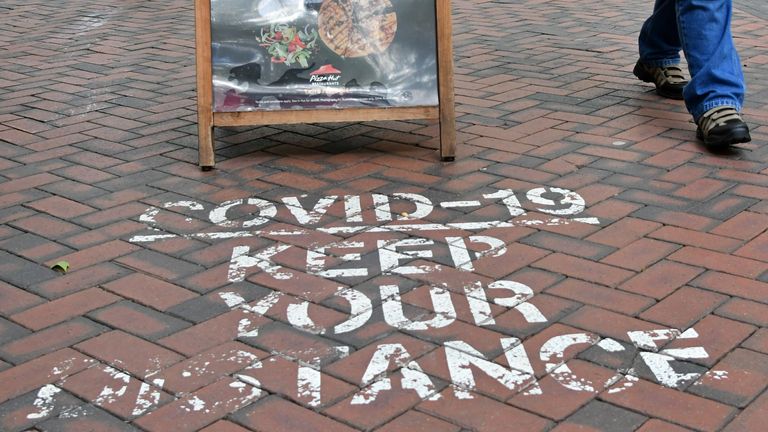 In a statement on Friday, the controlling Labour group on Trafford Council revealed they had asked for the local restrictions to remain in place for another week or two “in the interests of public safety”.

They cited a slight increase in the local rate of coronavirus infections in the last few days.

But the Labour statement said the government had instead overruled them and decided to lift the local measures, with an announcement expected later.

Mr Western claimed “nobody has bothered” to discuss the expected decision with him.

“I lead a council with a population of 230,000 people but government couldn’t be bothered to pick up the phone to tell me we were being overruled, let alone explain why,” he posted on Twitter.

The council leader added: “It is absolutely clear that government claims of partnership working with local authorities are nonsense and approach all about placating Tory MPs.”

But Nathan Evans, the leader of the Conservative group on Trafford Council, hailed a collaborative approach to reaching the decision.

He posted on Twitter: “After working in collaboration with evidence based data, local leaders and our MP the government has agreed to shortly lift extended restrictions in Trafford.

Last week, Health Secretary Matt Hancock announced a more targeted approach to local COVID-19 restrictions in which the views of MPs would also be sought to gain “the maximum possible local consensus”.

Among Trafford’s three MPs is Sir Graham Brady, the chair of the influential 1922 committee of Conservative backbenchers.

He told Sky News he had been “unpersuaded” by Trafford Council’s request for an extension to the restrictions and that he asked for more local data earlier in the week.

“It is worth noting that 19 of 21 wards had between zero and five cases in the last week with 11 wards having no cases or a single case.

“In most wards with any infection at all this will be a single household that is affected. Hospital admissions continue to fall.

“Continuing restrictions that make it illegal for people to see their families seems like an extreme measure in these circumstances.”

Ahead of the expected announcement on local coronavirus restrictions in Greater Manchester on Friday, political leaders in Stockport and Bolton reached a consensus to ask the government to remove current restrictions on social gatherings in homes.

Hazel Grove MP William Wragg told the Manchester Evening News on Friday that the restrictions would be lifted in Stockport.

Greater Manchester mayor Andy Burnham had said earlier in the week that restrictions in Oldham, Manchester, Rochdale, Bury, Tameside, Salford and Trafford should remain for now.

It was also announced on Friday that restrictions on mixing between different households in homes or gardens in Burnley and Hyndburn will be lifted from next Wednesday and brought into line with the rest of England.

Lancashire’s director of public health Dr Sakthi Karunanithi said: “People living in Burnley and Hyndburn will be pleased that government has lifted the additional restrictions in their areas, but this should not lead to complacency.

“In both Burnley and Hyndburn infection rates are significantly above the national average with an increasing rate in Hyndburn.

“Coronavirus does not respect administrative boundaries and there is a high volume of social, educational and commuting travel between these areas and Lancashire’s hotspots.”